iPhone 6 or LG G4? We compare specs to see how LG’s new flagship measures up to Apple’s smartphone

Another Android flagship has landed, hoping to take a bite out of Apple’s smartphone profits. LG has released its successor to the the LG G3, the TrustedReviews Phone of the Year 2014, and it’s one of the best Android phones on the market.

The question is, how does it fare against Apple’s uber-popular flagship phone, the iPhone 6?

We’ve lived with both now and here’s how the two compare.

Apple’s current flagship signalled a radical change in design. It’s significantly bigger than the iPhone 5S for starters. It now has an aluminium unibody with a curved trim, those now familiar antenna lines, and a much more useful Touch ID fingerprint sensor baked into the home button.

It’s still a great looker and beautifully built, but it’s by no means a visually iconic smartphone like previous iPhones have been. Its competitors have certainly caught up on this front, especially Samsung. But how about LG?

The LG G3 was all plastic and not all that fantastic to look at. It’s by no means ugly, but it didn’t exactly offer anything ground-breaking in terms of design. For the G4, LG is still sticking with plastic and the distinctive rear button approach, but it’s going slightly bigger and taking some design inspiration from the G Flex 2 with a slightly curved body. 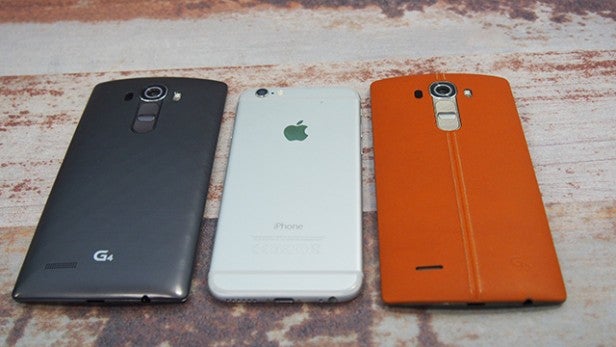 But the big news is the new leather back that LG has offered as an option (among other materials). It’s certainly going to turn more heads than the G3, though we suspect the verdict will be far from unanimous.

There’s also the fact that this is a mere facade, as evidenced by the decidedly plastic model we had in for review. This remains a thin, bendy, removable plastic cover – albeit a tarted up one.

The iPhone 6 isn’t the best-looking iPhone ever, but it’s much better to look at and hold than the LG G4 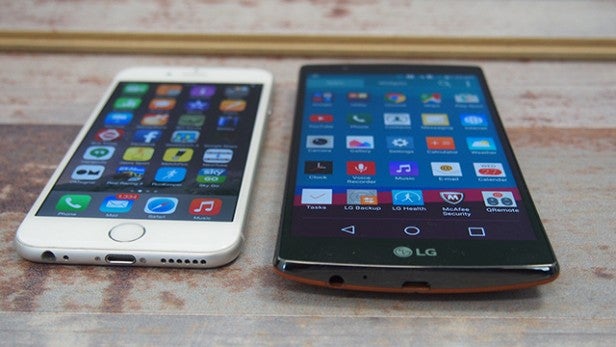 Before we compare resolutions, there’s the obvious difference in screen size. The G4 has a bigger one than the iPhone 6.

Despite the LG G4’s 5.5-inch ‘phablet’ dimensions, it’s actually not too much of a problem wielding it in one hand. Like its predecessor, that’s thanks largely to some extremely thin bezels.

Of course, the iPhone 6 represents a sizeable increase in size over previous models, but it successfully deals with the jump. It doesn’t sound like a big difference when you move from the 4-inch screen on the iPhone 5S to the iPhone 6’s 4.7-inch display, but it really is – and you won’t turn back when you go with a bigger screen.

The G4 features a QHD ‘2k’ display following its introduction on the G3. Unlike the S6 and S6 Edge’s QHD AMOLED screens, LG is using an IPS LCD panel that it calls a Quantum Display. It’s pretty much the same deal as the G3, although LG has made some improvements to increase colour gamut, delivering a contrast ratio higher than most QHD LCD panels and a 30 percent brightness increase to boot. 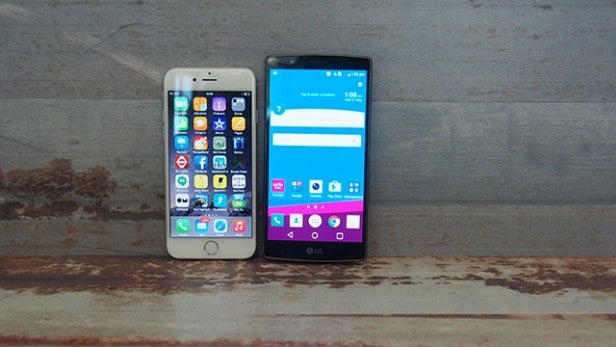 It’s definitely a step forward from the LG G3’s display, despite the similar specs on paper. However, we did notice that colours can look a little too vibrant here, with no options to tone it down at all.

So how does that compare to the iPhone 6? From a specs sheet point of view, the G4’s screen is going to be sharper, more colourful and altogether more vibrant. But you have to factor in that Apple’s flagship’s 1334 x 750 resolution is still well suited to a 4.7-inch IPS LCD screen. At this size, even 1080p is a bit of a luxury.

What’s more, the iPhone 6 display is brilliantly calibrated so that contrast and colour accuracy are spot on. It’s one of the best displays in the business. 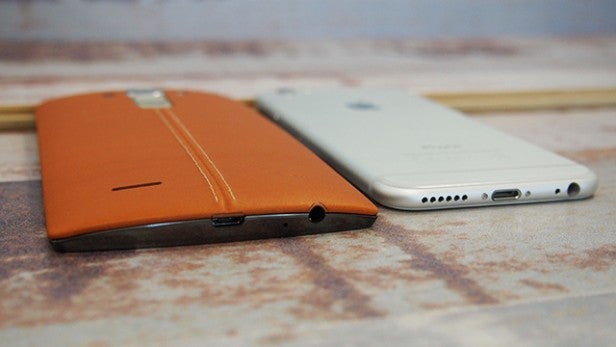 This is arguably the biggest headline-grabbing story. After delivering the first Snapdragon 810-powered phone earlier this year with the G Flex 2, LG has decided to opt for an hexa-core Snapdragon 808 – a step back that could further highlight issues with Qualcomm’s top line chipset.

Qualcomm insists that this was an informed and pre-meditated decision based on the fact that the Snapdragon 808 is better suited to 2K displays, but there remains questions over the reliability of the Snapdragon 810.

It means that we’re left with a chip that, while fast, isn’t quite top of the line. Besides the Snapdragon 810, it also falls short of the Galaxy S6’s custom Exynos CPU.

MORE: How many cores do you actually need in a phone? 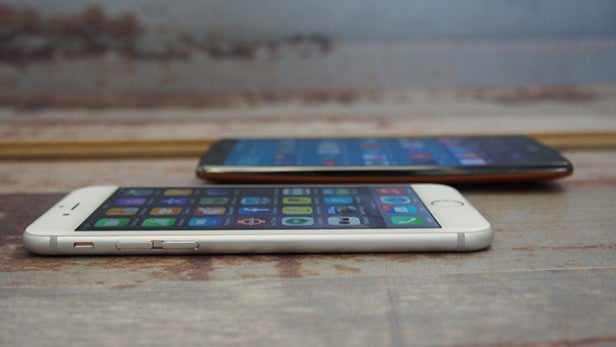 More importantly, however, the Snapdragon 808 was faster than the iPhone 6 A8 chip in our benchmarks – though only slightly.

Apple relies on a dual-core setup with a PowerVR GX6450 GPU and 1GB RAM. There are fewer cores and RAM compared to the G4, but those aren’t the issues they might seem to be.

In terms of RAM, iOS is known to be less demanding than Android. Meanwhile, modern smartphones don’t really benefit from four cores as much as they do from one or two fast ones.

It loses out on the numbers game, but as we’ve found living with the iPhone 6, it’s more than suitable for keeping things slick and speedy. 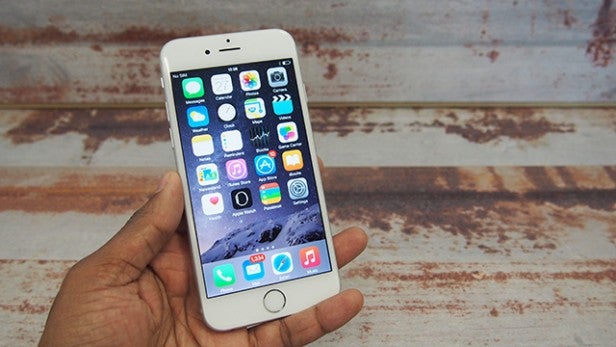 What’s more, while the LG G4 has a microSD slot that allows you to expand by up to 128GB, the iPhone 6 (as ever) has none.

In truth, we prefer a large amount of internal storage to optional microSD. It’s faster and less fiddly. However, we feel that Apple made a mistake in making 16GB the entry-level amount and ditching 32GB.

16GB isn’t quite enough for a flagship phone. 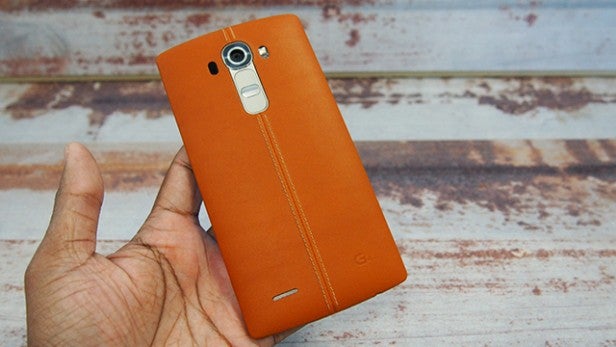 It’s tough to call, but most Android manufacturers make it a easier by layering on clunky custom UIs. While the LG G4’s isn’t exactly bad, it’s still not as good as stock Android 5.1, and nor is it as good as iOS 8.3 on the iPhone 6.

There’s just something slightly cheap and amateurish about LG’s Optimus UX, and there’s still a hint of lag to it even with the G4’s new and improved CPU.

iOS 8.3 on the iPhone 6, by contrast, remains a slick delight of an operating system. No, it’s not as good for those who like to tweak and personalise their home screens to the Nth degree. But it’s fluid and consistent and easy to use, which is what really matters to us.

Until LG offers the ability to go full stock Android with its handsets, we fear this particular section is always going to go in favour of Apple. It’s in good company with Samsung and HTC, among others. 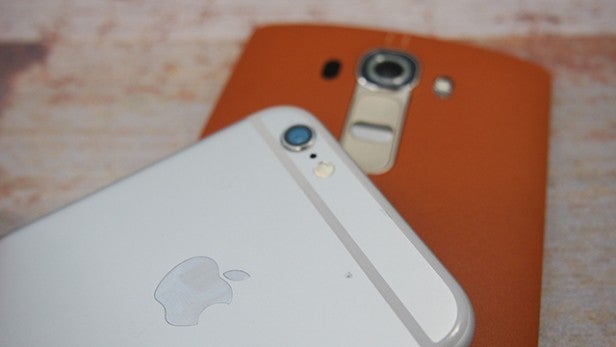 We wouldn’t have predicted this when the iPhone 6 hit shots towards the end of 2014, but the LG has managed to pip the Apple flagship’s imperious camera with the G4.

It really is an impressive piece of work. Yes, it’s got double the megapixel count, but that’s by the by. The LG G4 wins this based on other factors, such as a wide-open f/1.8 aperture, a large 1/2.6-inch image sensor, optical image stabilisation, and a colour spectrum sensor for better colour accuracy.

All of this contributes to images that simply look better than their iPhone 6 counterparts – particularly in low-light shots, which is the bane of smartphone photography.

LG has also provided the most intuitive set of manual controls on any smartphone camera we’ve used, which is an area Apple has always shied away from. Oh, and it also has RAW support for pure, unprocessed images.

Alongside the Samsung Galaxy S6, these are two of the best cameraphones on the market. We reckon that the LG G4 could be the best of the lot. 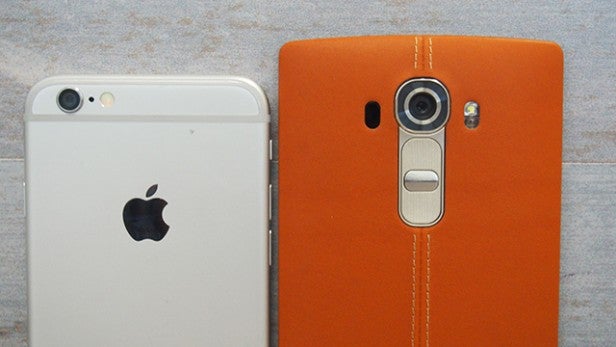 Those figures above don’t really mean a lot. These phones are just built too differently to make a physical battery capacity comparison meaningful.

The LG G4 has a much bigger, much brighter display to run, a different kind of multi-core processor, and a completely different operating system to the iPhone 6.

When it comes down to real world usage, the two are comparable. You can get home from work with the LG G4 with around 40 percent power left in the tank, while back when we tested the iPhone 6 this varied between 30 and 60 percent depending on usage.

Neither has the best battery life we’ve ever seen, then, but they’re not bad – and more importantly pretty even.

We should also note that the LG G4’s battery is removable, which will excite a few – but mean nothing to most. How many people do you know who carry a spare battery around with them?

Both phones charge in around two hours, which is plenty fast enough. 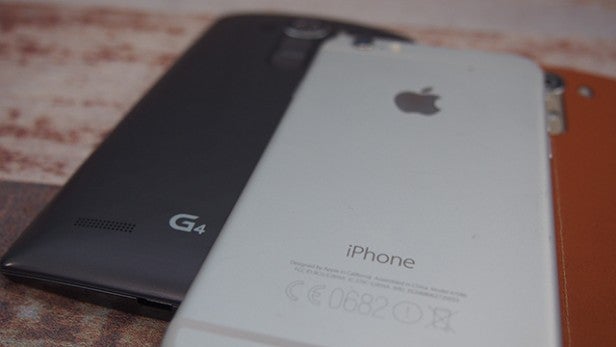 We were massive fans of last year’s LG G3. As we’ve mentioned, we named it our phone of the year.

While the LG G4 is an undoubted improvement in numerous respects, however, we feel that LG hasn’t quite carried things far enough. In particular, it’s missed the mark in terms of design.

We’ve criticised the HTC One M9 and praised the Samsung Galaxy based primarily on the freshness of their designs, or lack thereof, so it only seems fair that we hold LG to the same standards. No amount of leather can make up for cheap plastic build quality.

Though the iPhone 6 isn’t our favourite ever iPhone design, meanwhile, it is both new and elegant. What’s more, Apple has managed to make the move to a larger display a lot less traumatic for iOS users than it could have been.

Besides hardware, LG’s heavy-handed software tweaks also continue to grate a little, and it doesn’t sit well at all alongside the clean and crisp iOS 8.3.

The one area where LG has trumped Apple – and somewhat surprisingly at that – is in the camera stakes. The iPhone 6 initially seemed untouchable in this field, but first the Galaxy S6 and now the LG G4 have come and knocked it off its photographic perch.

Overall, it’s a win for the iPhone 6 thanks to its all-round competence rather than any outstanding features. LG hasn’t made any glaring mistakes here, but it has just fallen a little short in a few vital areas