As LG prepares to take on Samsung in the smartphone-based VR headset market, we take a look at how the current champion, the Gear VR, compares with the LG 360 VR.

LG has now entered the virtual reality market with the LG 360 VR, where bitter rival Samsung awaits with the Samsung Gear VR.

It represents the latest phase of the ongoing battle between these two local rivals. LG and Samsung already scrap over smartphones, TVs, and home appliances. Now they’re taking their feud to the virtual domain.

So how do these two smartphone-driven VR headsets compare? There are a few notable differences, and one very clear winner, as we’ll discuss below.

If nothing else, LG’s VR headset wins points for being considerably more compact than the Samsung Gear VR, with a much smaller visor. Samsung’s headset, by contrast, is more chunky and sticks out a fair way from your head.

This is reflected in the respective weights, with the LG 360 VR weighing just 116g. That’s around a third of the weight of the Gear VR at 318g (without the mobile phone element).

As a result, the LG 360 VR doesn’t actually need to strap onto your head like the Gear VR does. Rather, it slides on like a pair of glasses. 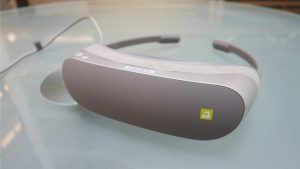 All of which means that the LG 360 VR is the much more portable device of the two, but its design is a lot less practical. Its small visor lets in a lot of light, breaking the immersion in comparison to the Gear VR.

What’s more, the ineffective light shield that is provided by LG makes adjusting the headset’s lenses extremely awkward. If you’re like us, you’ll struggle to get a good picture from it as a result.

The Samsung Gear VR may be the bulkier of the two devices, but its design is much more practical and functional. “It’s all very well designed, with Samsung and Oculus having thought through each part to make it user friendly and comfortable,” we said in our review.

The reason the LG 360 VR is so much smaller and lighter than the Samsung Gear VR is that the two devices take very different approaches to their displays.

While both are driven by smartphones, the Gear VR requires you to physically slot that smartphone into the headset, where it becomes the display.

The LG 360 VR is different. Here the smartphone element stays separate, and the headset plugs directly into the LG G5 via the USB Type-C slot. 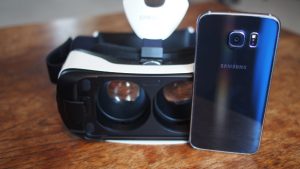 The LG headset’s screen is lower res than any of its rivals, then, but it’s also notable for its unusual aspect ratio. At 5:4, it’s designed to give a taller field of view than is normal for a VR headset. At 80 degrees, the horizontal field of view is much narrower than the 96 degrees afforded by the Gear VR.

We also found that the display itself offers a washed out picture, with poor colour reproduction. All of which makes for a much less immersive experience than with the Gear VR. 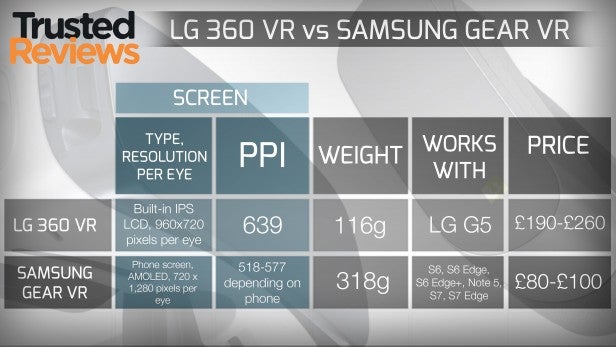 As we’ve already discussed, both the LG 360 VR and the Samsung Gear VR are driven by smartphones. It should come as no surprise to learn that both require phones from their respective manufacturers.

However, the Samsung Gear VR still wins out on the compatibility front. While it can operate with the Galaxy S7, Galaxy S7 Edge, Galaxy Note 5, Galaxy S6, or Galaxy S6 Edge, the LG 360 VR only works with the one phone: the LG G5. 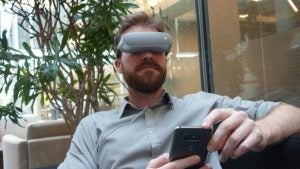 The LG 360 VR is supposedly compatible with Youtube’s VR channel as well as Google Cardboard apps, but when we downloaded the Cardboard app, we were unable to select the 360 VR as our designated device.

Indeed, we’ve found with our model that there’s only one app available to use with the 360 VR: Jaunt VR.

No doubt LG will be adding more content to the vrChannel, but it was completely empty during our review period. There are icons for things like Epic VR, SBS Player, and NextVR, all of which are currently blanked out, so clearly there’s more on the way. 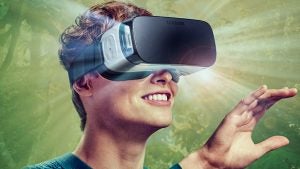 All in all, though, it doesn’t seem to have anywhere near the same level of specialised content as the Gear VR.

Samsung’s headset, for its part, has come on a lot in recent months, with new apps and games being added all the time.

It draws most of its content from the Oculus Store, due to the fact that it was developed in conjunction with the Facebook-owned VR company. That’s proven to be a major leg-up in the VR space. The Gear VR also has access to a smaller range of Samsung-made VR content.

Samsung’s VR headset simply offers a much richer, more rounded VR experience. You can play games, browse the internet, and watch videos – all from within a well-designed and app-rich interface.

LG 360 VR performance is much worse

What little VR content is available on the LG 360 VR performs pretty poorly. You’d expect the powerful LG G5 to drive things along well, with its Snapdragon 820 CPU, Adreno 530 GPU and 4GB of RAM.

However, the 360 VR’s launch experience isn’t great. Playing 360 degree videos through the Jaunt VR app yielded a shuddery and distorted picture, despite outputting at a relatively low resolution. In fact, it might make you feel a little unwell – smoothness in VR being the key to keeping your lunch down.

By contrast, performance on the Samsung Gear VR is very solid indeed, after its somewhat glitchy early iterations. We’ve had no issues with buggy content, crashing or any unresponsiveness in the latest headset. 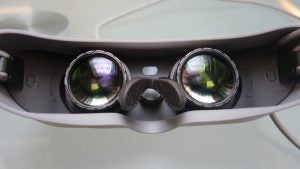 Samsung is much cheaper

Prior to the LG 360 VR’s release, Shaun Musgrave, LG’s Product Marketing Manager for the UK and Ireland, told TrustedReviews that pricing “will be very competitive” and that it “sits within the same space as the [Samsung] Gear VR”. 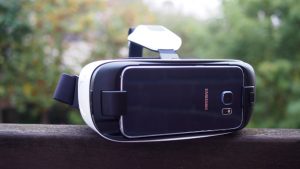 However, initial retailer listings seem to be putting the LG 360 VR in the £200 bracket, which is considerably more expensive than the Gear VR. We’re hoping that these prices will drop significantly once the headset becomes widely available, but it doesn’t bode well.

For now, the LG 360 VR bafflingly costs around twice as much as the Samsung Gear VR.

Based on our extensive hands-on time with a final retail model of the LG 360 VR, LG’s take on VR is simply not up to the task. It falls well short of what Samsung has to offer.

Both in terms of the immersive VR experience and the range of VR content, LG is way behind Samsung at this early point. There’s much less VR content to play with on the 360 VR, and the actual VR experience is a glitchy, sluggish mess with poor picture quality that suffers further from excessive light bleed – none of which afflict the Gear VR.

Samsung’s VR headset is better than LG’s in virtually (pun unintended) every way – including the all-important matter of price. There really is only one choice here, and even if you own an LG G5 already, we’d recommend opting for a Google Cardboard headset instead of LG’s offering.

Thanks to mobilefun.co.uk for providing us with the LG 360 VR.