On this day in 1958, the first LEGO brick made its way into a wide-eyed child’s hand – and the toy world would never be the same. On LEGO’s 60th anniversary, News and Features Editor James Laird rolls back the years with LEGO designer Jonathan Robson.

They say you always remember your first time.

In my case, that’s not restricted to the best 10 seconds of humiliation I’ll ever endure, or even a first trip to Foxborough.

It also applies to clicking that final, magical brick into place and completing my first LEGO set.

Some 25 years on, the name of the set understandably eludes me, but I can still remember some of the smallest details, like the final brick being a thin blue square that latched on to the top of Robin Hood’s forest hideout.

It seems like an eon ago, so perhaps it shouldn’t come as a surprise that Lego today marks a momentous day in its storied history. On Sunday, January 28 2018, LEGO bricks turn 60. They have lived roughly two of my lives, while the LEGO Company itself actually dates as far back as 1932, meaning it has survived a World War.

What’s really fascinating is that while everything has changed – the relatively simple Sherwood forests of my youth have been superseded by elaborate Star Wars builds that stimulate the minds of adults every bit as much as they do children – everything has also stayed the same.

Believe it or not, the LEGO brick that first found their way into a wide-eyed child’s hand back in 1958 is still compatible with the ones found in today’s jazziest sets.

I learned this pretty incredible fact speaking to Jonathan Robson, a LEGO designer who works across its Creator and Classic Ranges.

“The principles of the design of LEGO haven’t change. It’s still putting bricks together. We’ve developed the model and experience in that time, and grown what we’ve made – many different types of play experiences – but the principles within the design as a toy haven’t changed. You can use those old bricks with the new bricks and build that model that you’ve always wanted to build,” he told Trusted Reviews in an interview.

What also remains untouched by time is our attachment to the LEGO of our childhoods, according to Robson – and I couldn’t agree more.

When asked what LEGO sets stood out to him, Robson point to the recent Star Wars Death Star set, but also the build and play experiences he grew up with.

“The one’s I’ve been making!” he quipped, before adding, “[But] LEGO sets from my childhood. I was the kid who played with LEGO a lot [and] I kept on playing. Back in the 90s, I feel really nostalgic for….I personally have this connection to them.”

As well as sharing nostalgic tales of sets past, I also spoke to Robson about some fun LEGO facts. His party piece?

“If you build a column of about 40 billion LEGO bricks, it would reach the moon!” he revealed, something probably even the most committed LEGO-head didn’t know.

Mine? It’s a slightly better documented office ‘hack’, but LEGO figures really do make the most kick-ass cable holders… 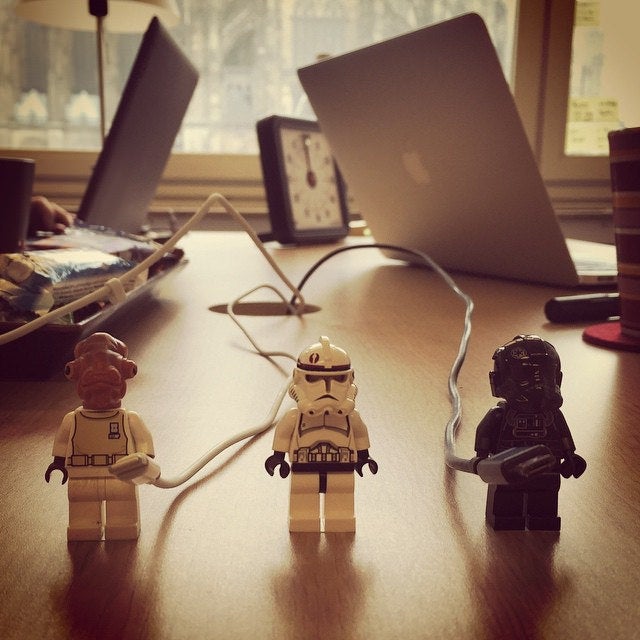 Happy birthday, LEGO – here’s to 60 more years of the most fun you can have with your clothes on.