We are often told that the internet is killing TV. Why don’t we give it a hand?

On 11th December the UK’s mobile networks will submit their applications for the 4G auctions. The actual auctions will happen early next year and between them those networks are expected to pay in the region of £4 billion for the rights to use a slice of the electromagnetic spectrum.

This lucrative band of wavelengths lies between 700-800 Mhz – the so-called ‘800 Mhz band’ – and is currently occupied by Digital TV broadcasts. By 2018, Digital TV will have to shuffle further along the spectrum to the 700 MHz band to make way for the 4G signals the mobile networks will use to bring high-speed internet access to their customers.

Still, it will be worth it to get that bandwidth for mobile users and at least we won’t have to do it again, right? 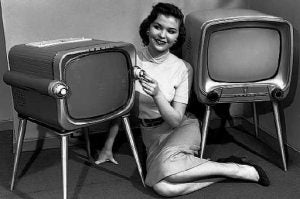 Actually, we will. Even before this 4G auction has begun, Ofcom has said that demand for mobile data may require a further carve-up of the wavelengths. Within a few years TV is likely to be moved again, this time to the 600 Mhz band.

Moving the Digital TV signal in this way is expected to be a costly exercise. TVs and set top boxes will need to be retuned in people’s homes and transmitters will need to be recalibrated. An estimated 900,000 homes are too close to their nearest mast and will need a filter on their receiver. In some cases the rooftop aerial will need to be modified by a qualified engineer.

aerialTo help ease the country through these changes the Government is setting aside £185 million from the 4G auction to pay for engineers, filter boxes, advertising and other expenses. As well as the financial cost there will also be inconvenience for viewers who will have to retune their TVs and STBs and all this just a few months after the end of the last major disruption – the shift from analogue to digital TV.

Still, it will be worth it to get that bandwidth for mobile users and at least we won’t have to do it again, right?

You can probably guess where this is going.

Research by Ericsson, published this month, shows that mobile data traffic has doubled in the last year and is expected to grow by around 50% a year for the next six years. Consumer demand may force TV to move once more as networks fight over the remaining bandwidth and try to roll out more advanced 5G protocols.

Fiddling with the digital TV signal is costly both financially and in terms of public goodwill. A better solution might be to abandon digital TV entirely. Stop broadcasting and give the entire mobile spectrum over to the carriers.

Broadcasting TV signals over the air in their own segment of the spectrum may have served us well in the analogue era but with more services competing for a finite resource, perhaps it is time to move our TV to the internet and go all in for IPTV.

IPTV – TV ‘broadcast’ as internet packets rather than a dedicated signal – is currently the domain of a few Video On Demand services and web-based viewers such as iPlayer which offers a live TV stream in addition to its catch-up TV archives. Moving our entire TV infrastructure to IP would be a huge job but the benefits could be worth it.

For IPTV to work on a national scale every household in the UK would need a superfast broadband connection of at least 30Mbps. The UK Government is already committed to European targets for superfast broadband penetration, but the 2012 Digital Agenda Scoreboard from the European Commission shows that we are lagging behind several European countries with only 5.5% of homes able to receive 30Mbps or above.

Rather than pouring money into retooling our existing TV infrastructure in a losing game with mobile networks, wouldn’t it be better for the UK to seize the opportunity to push ahead with superfast broadband to homes and offices and allow the mobile spectrum the room to give an equivalent service over the air?

Fast internet access should not be a luxury or subject to a postcode lottery. Every aspect of our lives is now connected to the online world and the ability to access the internet cannot be far from the point where it is considered a utility as essential to modern life as electricity or running water. Using TV as a driving force to push adoption and investing in the necessary infrastructure could give UK businesses an advantage over their competitors and give us a powerful resource for education.

By freeing up the spectrum mobile networks could offer us more bandwidth and further investment could be made in mobile hotspots to take even more pressure off the airwaves. Ultimately, even those parts of the mobile spectrum reserved for voice could move to the internet too. Hopefully at slightly better quality than the average Skype call.

Whatever happens, in the next few years our TV reception is going to require a serious rejigging and viewers will face a lot of inconvenience. Either we act soon and make a final change or face more disruption again and again as we slice the airwaves up, trying to squeeze TV into an ever smaller space.