The iPhone series is five years old. In its time on this earth, it has sold more than 200 million phones, currently earning Apple more than 50 per cent of the smartphone market’s profits. How did Apple get there, and what is it about the phones that means everyone’s getting all hot under the collar again for the iPhone 5.

2007 – The Beginning
At the time of the first iPhone’s release, the phone market was a completely different place. Nokia claimed around 40 per cent market share, for one. In those days, the Nokia N95 was cutting-edge, camera phones were still a novelty and the few people who had 3G mobile internet in their phones barely knew how to use it. 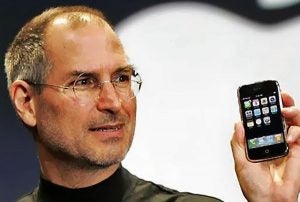 Steve Jobs during the 2007 press conference

Then the iPhone arrived. You can still read the press release online. At the Macworld conference in January 2007, Apple revealed what it called a “revolutionary mobile phone, a widescreen iPod® with touch controls, and a breakthrough Internet communications device.” The man behind the design of the beautiful device was Jonathan Ive, who has since been knighted for his work on Apple’s iPod, iPhone and iPad products. 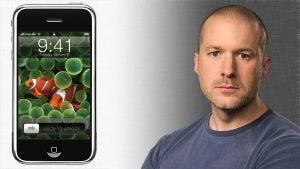 There was no mention of apps, of course – at this point mobile apps and games were not taken seriously, sold through half-hearted online portals for the most part by mobile phone networks within their WAP websites.

The first iPhone’s design has aged fairly well – and remained largely unchanged up until the iPhone 4 was launched – but its innards seem pretty feeble by today’s standards. It rocked a 412MHz processor, a 2MP camera and either 4GB, 8GB or 16GB of internal memory. It didn’t even have 3G mobile internet, restricted to slow-poke EDGE, and Wi-Fi.

It’s not often talked about these days, but the iPhone did take some time to gather steam. In 2007 as a whole, it sold 3.7 million units – the iPhone 4S sold more in its first three days.

A success? Yes, but it was also outsold by phones from Motorola, LG and Samsung that year. Contrary to popular belief, it wasn’t the first phone to use a capacitive touchscreen either – an honour that surprisingly enough went to the original LG Prada.

2008 – The Birth of Apps, and Android
It wasn’t until the second year of its life that the iPhone range began to transform into the powerhouse we know it as today. The iPhone 3G was announced in June 2008. It kept the lowly 412MHz processor, the rubbish 2MP camera but added in quick HSPA connectivity. Suddenly, web browsing and email-grabbing on the go became a lot more attractive. It sold a million in its first weekend.

Meanwhile, arch-rival Nokia continued churning out phones roughly based on the Nokia N95 mould. The Nokia N81 and N85 didn’t have touchscreens, and ran Symbian – which was a lot less swish than it is now (and that’s saying something). 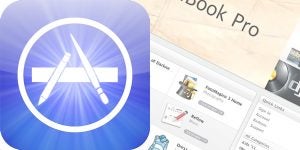 The market was changing, and Nokia’s lethargic response played to Apple’s advantage.

With hindsight, it’s easy to see the factors other than good design that led to Apple gaining such market power. It launched the iTunes App Store in July 2008, which was long before the first Android phone was even released.

The first Android phone to hit the UK was the HTC-made T-Mobile G1, launched two months later in September, by which point the App Store had already chalked up 55 million downloads. The “App Revolution” wasn’t in full swing yet by any means – with under 15,000 available by the end of 2008 – but Apple had an important head-start.

Android was quick to launch the Android Market (a month after the first phone arrived, in October 2008) but Apple already had a userbase there to exploit the exciting new app space.