Which metal phone should you buy?

They’ve fought it out in the courtroom, poked fun in adverts and now Samsung and Apple have two new phones to intensify the rivalry even further. Everything from the screen size to the nano-SIM support suggests the new Samsung Galaxy Alpha is aiming to directly take on the 4.7-inch iPhone 6.

The question is, has Samsung finally cracked it with the Alpha and built a better smartphone than the new iPhone? We compare the specs to find out if you should go Apple or Android.

If you want more metal there’s really only one phone to go for here. The iPhone 6 features a solid aluminium frame and back that’s gently curved to fit more snug in the hand. It’s curved glass up front as well. It’s not the Sapphire kind everyone expected but something Apple is calling ‘strengthened ION glass’.

The chemical process to create the toughened glass involves dipping the glass into hot potassium salt, where the sodium ions in the glass migrate and the larger potassium ions squeeze themselves into the vacant holes in the glass to create the more durable structure. If that sounds familiar, that’s because it’s basically the same process used for Gorilla Glass, which just so happens to appear on the Alpha.

The Alpha is by no means shabby-looking and is by far the most attractive phone Samsung has come up with along with the soon to be released Note 4. It uses the same dimpled back as the S5, albeit it’s even softer to touch and now replaces the metallic-looking plastic trim with a real aluminium metal one. Unlike the iPhone 6, the corners are slightly raised to make it more nicer to grip in landscape mode. At 115g, the Alpha is a supremely light handset to use. The more premium materials provide a nice balance for what is still a predominantly plastic phone. 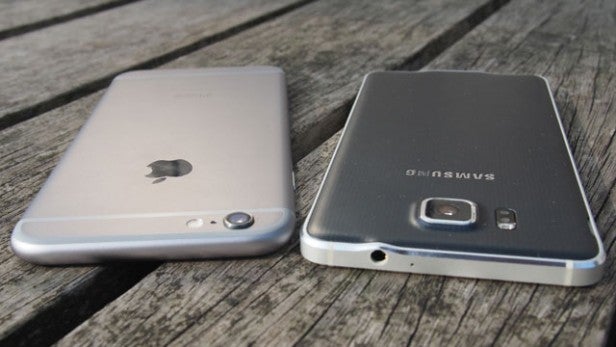 While the Alpha doesn’t get the same Full HD screen as the S5, its 720p display is a good match for the iPhone 6. It’s the same 4.7-inch size as the Apple smartphone and offers similar screen resolution although the iPhone 6 has the more impressive pixel density so on paper should offer more impressive clarity.

As we’ve found with the Alpha, the Super AMOLED displays can be slightly erratic out of the box although Samsung includes a calibration mode in the settings to help fix those issues.

The iPhone 6 promises better sharpness than the Alpha, but both phone displays are great performers for a 4.7-inch screen, though it is of course nothing that several rival handsets offer a 1080p resolution at the same screen size. 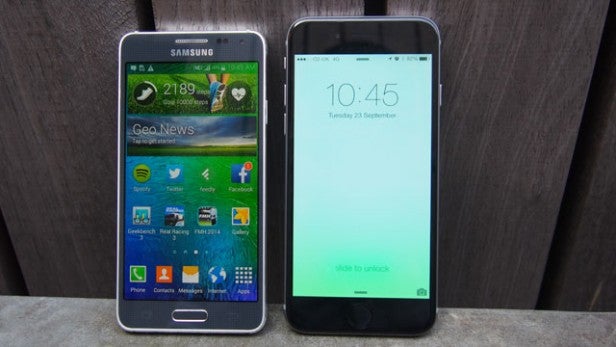 On the megapixel count, the Alpha wins, but then everyone knows it’s not all about megapixels. The Alpha uses virtually the same main camera as the S5 although it drops from a 16 down to a 12-megapixel ISOCELL sensor. Crucially though, it still includes the new zippy phase detection autofocus and can shoot 4K video, which is something the iPhone isn’t currently capable of. From our time with the Alpha we know it can still take sharp, colourful photos and has a great HDR mode that doesn’t overdo it with the processing.

Where the Alpha struggles is low-light shooting and the iPhone 6 has the tools to do a better job. Like the Alpha it doesn’t include proper image stabilization you find in standalone cameras and now includes something Apple is calling ‘Focus Pixels’. This is essentially the same phase detection autofocus the Alpha uses to improve focussing speed and prevent those blurry, out of focus night time shots. There’s also Apple’s TrueTone flash to help improve capturing faces when things get gloomy as well although that’s not new and has appeared on the iPhone 5S. We’ve not had time taking pictures with the iPhone 6, but it’s clear that both are very capable shooters. 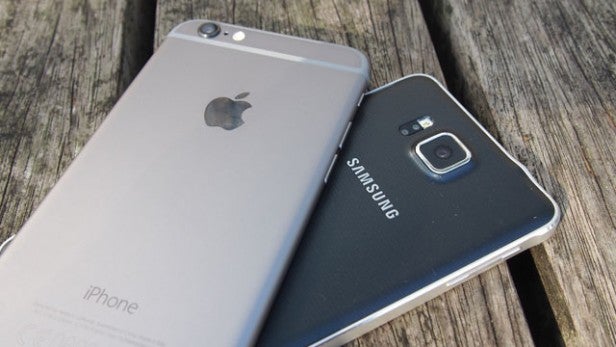 Going iOS or Android is going to play a major part for most when deciding between the Alpha and the iPhone 6. On the one side, you have iOS, which is one of the easiest mobile operating systems to use and in the latest update introduces a raft of new features. Many of those have been available on Android for some time like third party keyboards, as well as improved cross-platform compatibility, widgets and smarter notifications.

There’s new iOS 8 features the latest version of Android doesn’t have like a more comprehensive Message client, more interactive notifications and the interesting Family Sharing so you can share iTunes content without having to pay for it again.

Samsung’s Android approach has come a long way in recent years staying much closer to the pure version of Android you can find on the Nexus 5. There’s less of the bloatware and it’s simply a cleaner, more intuitive place to get around than previously. The TouchWiz UI doesn’t add a whole lot of features on top of Android but Samsung is making a big push on fitness with its S Health platform.

Much like Health on iOS 8, you can collate activity tracking data including support for third party app support. With Android 4.4.4 KitKat rolling out recently it also adds the ability to track weight, sleep and stress. Apple also has its own Health platform, which does work in a similar way.

Apple appears to have stepped its game up with iOS 8 and is the one we’d slightly favour at the moment. Should the Alpha get the Android 5 L treatment, that could level things out, but arrival times for these updates are always sketchy. 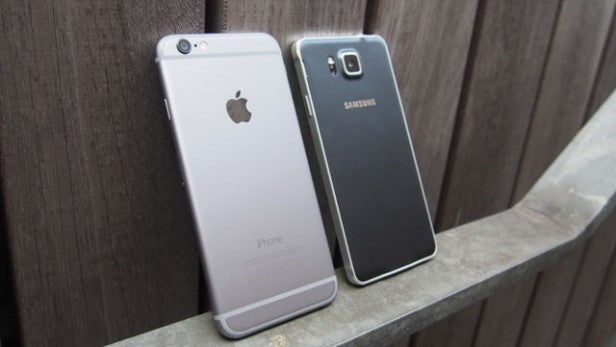 As we found in our Galaxy Alpha review, it’s an Android phone that’s not short of power and in the benchmark tests even surpasses the S5 for performance. There’s more RAM on board than the iPhone 6 to take care of multi-tasking and while the Octa-core CPU doesn’t use all eight of the cores at the same time, it’s very zippy.

The iPhone 6 builds on the 64-bit architecture present in the iPhone 5S sticking with a dual-core Cyclone processor to accompany the 1GB RAM. Apple claims it’s going to be 84 times faster than the first iPhone and make big improvements in CPU and graphics performance over the previous generation.

The A8 also aids camera improvements and should make the iPhone more efficient in the battery department. During the iPhone 6 announcement, Apple talked up the GPU improvements in the new iPhones although early benchmarks suggest there’s only a slight improvement on the 5S.

Working alongside the A8 is the M8 co-processor, which is dedicated to tracking movement and continues to enhance the iPhone 6’s fitness credentials making it more suitable to take to the gym or out for a run. 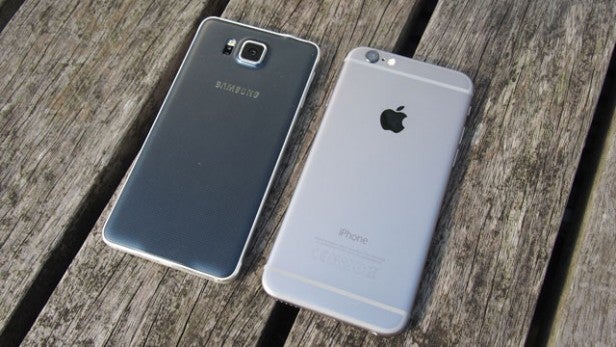 There’s really only one winner here. Apple has more model options and that’s a good thing when you consider it’s still seemingly opposed to adding micro SD card support. It has however left out a 32GB model this year and when you consider there’s an £80 difference between the 16GB and 64GB models, that’s disappointing. On top of physical storage you do get iCloud support where you get 5GB of storage for free to kick things off.

The Alpha is only available in one model and of the 32GB on board storage, there’s actually only around 25GB to play. That’s due to the system software needed to run the Alpha taking up around 6GB of storage. Samsung doesn’t really have its own dedicated cloud storage service, but you do of course get access to Google Drive, which is also available for the iPhone 6, and there’s an initial 15GB of storage up for grabs for free. Samsung can normally rely on the addition of a microSD slot to claim more storage options but not here.

MORE: Google Drive vs iCloud vs Dropbox vs OneDrive 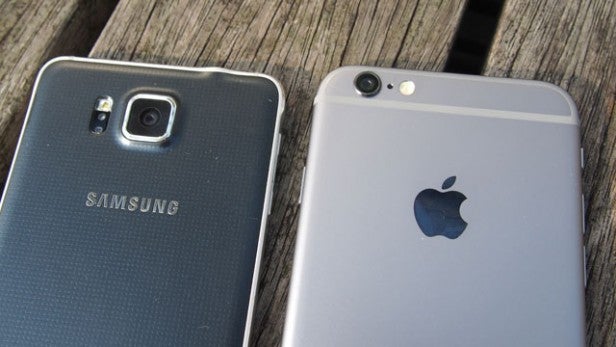 There’s very little between the two when it comes to power. The Alpha as we found in our tests will make it through the day and you can push it to a day and a half especially when you take advantage of the very useful Ultra Power Saving mode. This basically turns the screen to black and white and will limit the number of apps you can use.

The iPhone 6 moves to a new 1,810mAh up from a 1,560mAh on the iPhone 5S, which managed to hit around the 9 to 10 hour mark with mixed usage. While the battery is bigger, so is the screen it needs to power and while the new A8 CPU aims to make the iPhone 6 more efficient, we will be surprised if it beats the Alpha for going the distance.

We’ve spent more time with the Samsung Galaxy Alpha so it’s easier to form an opinion about Samsung’s metal phone than it is of the new iPhone at the moment. What the specs comparison shows is that the two phones have never been closer. On paper, core features like screen quality and camera are evenly matched.

Design purists will no doubt favour the more metal iPhone but Samsung has made great strides getting the Alpha to look as good is it does even if there’s still some plastic there. It’s going to be close but changes to iOS and the more flexible storage options have us siding with the iPhone 6 for now but we’d be curious to know how well the battery holds up and whether the new A8 processor is as impressive as Apple says it is.