We’ve seen how the iPhone 6 compares to the Galaxy S5, but when you look at last year’s flagship phones, the One M8 arguably has more in common with the latest from Tim Cook and company.

Both devices are designed with huge amounts of style, constructed from precision cut aluminium and pack features that are uncommon on other flagships.

Neither device really boasts about its specs, instead they let the user experience do the talking. But, it still comes down to one question – which is best? We see how the 4.7-inch Apple smartphone matches up to the One M9 predecessor.

iPhone 6 vs HTC One M8: Design

We’re massive fans of the design of both these phones and they are in a league of their own when it comes to looks and feel in the hand.

The aluminium build, sleek edges and highly-engineered touches on both devices show a lot of design skill, but they also help make them comfortable to hold as well, especially in the case of the HTC One M8, which has a slightly more curved back. This curve sits in your palm, which is a vital because with the One M8 being so tall (146.6mm tall vs 138.1mm on the iPhone 6) it’d be tough to hold if it was as flat as the iPhone 6.

It’s a tough call picking a winner on the style front, as they are both are really well built devices. If your hands are on the smaller side, then you might take issue with the height of the HTC One M8 though. 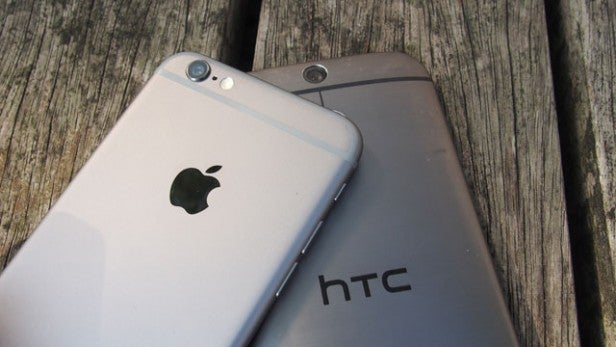 iPhone 6 vs HTC One M8: Screen

Glancing over the specs you’d be forgiven for assuming the HTC One’s Super LCD display boasting a 1080p resolution would blow the barely 720p version that sits on the iPhone out of the water, however it’s not that clear cut.

Obviously, you’ve got the size difference of 0.3-inches between the two but that aside, both these screens are going to be absolutely beautiful to look at.

You can similarly expect colours to be vivid, deep blacks and text that’s crisp even when you crank the size down. As they both use LCD displays, you won’t get that intense hit of bright colour you see on Samsung’s Super AMOLED displays, but you will get something much more realistic.

Both phones have added protection covering the screens, with HTC using Gorilla Glass 3 and Apple improving the iPhone’s durability with a Gorilla Glass-like ion strengthened glass. So yes, they decided against using sapphire glass in the end.

If you want the extra screen real estate, the HTC One M8 is for you, but don’t be put off the less than headline iPhone 6 display specs because the Retina HD screen is as good as anything else out there.

SEE ALSO: HTC One M9 vs One M8: Should you upgrade? 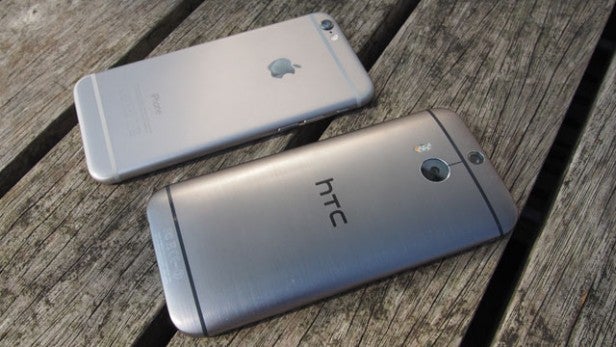 iPhone 6 vs HTC One M8: Camera

Now things get a little more interesting as both these phones shun the idea of packing the camera full of megapixels, instead offering nifty tricks to try and offer something different when taking photos. It works fantastically well on one device, and not so well on the other. Let’s take a look.

The iPhone 6 boasts the same 8-megapixels we saw last year, but Apple has added something it calls ‘focus pixels’. This dramatically speeds up time needed to focus your shots, giving you a speedier experience and more chance of pulling off that awesome snap.

Apple also kits the iPhone 6 out with digital image stabilisation (want optical? upgrade to the iPhone 6 Plus), f/2.2 Aperture and the frankly awesome slow-mo video mode that now captures video at 240fps. 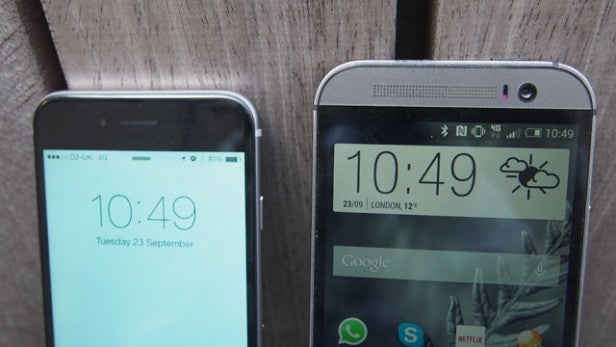 HTC’s One M8 again keeps the same 4-megapixel (or Ultrapixel) camera as the original One, which the Taiwanese company claims lets in more light, thus making your after-dark shots look better.

So who comes out on top? Well, we think the iPhone on paper is the one. It promises a simple, yet pretty powerful app with a fast and accurate auto focus to build on the beautifully detailed shots you can get with the iPhone 5S.

The HTC One M8 is by no means a shabby camera either though. It’s feature-packed and can produce decent daylight shots and indeed does perform well when the lights are low, but the shots just lack detail.

Both record 1080p video at 60pfs, and both also boast two tone LED flashes for even skin tones. They’re better than your average flash, but not by that much.

One thing the HTC One M8 has got over the iPhone is the depth sensor, which can add a nice looking Bokeh effect to your snaps.

As ever, Apple has badged up a custom SoC to power the iPhone 6 and this year it’s the A8. This chip is pretty advanced, with a 64-bit and 20nm architecture, it may not pack the numbers that the HTC One M8’s Qualcomm Snapdragon 801 does, but believe us it has plenty of power.

There’s still only 1GB RAM in the iPhone 6, whereas the HTC One M8 has 2GB. Will this make a difference? We’ll have to use the iPhone 6 for a few more weeks to know for sure, but we doubt it.

The
iPhone 6 is the first Apple phone (or product for that matter) to come
packing NFC, though if you’re expecting it to work in the same way as it
would on an HTC One M8 you’re going to be a little disappointed.

While
NFC on HTC’s device can be used to connect to other compatible
products, like headphones, share pictures and so on, the chip on the
iPhone is for one thing only – Apple Pay. But, if you’re living here in
the UK, you’re not going to be using that for a while either as it’s not
due to land on these shores until 2015.

Built-in to the home
button on the iPhone 6 is the TouchID fingerprint scanner we first saw
last year on the 5S and it’s easily the best fingerprint recognition
tool on any device, including the Samsung Galaxy S5. It’s made even better by Apple’s decision to open the technology up to allow third party app support so it will now work with the likes of Evernote and 1Password.

The HTC One M8
doesn’t include anything like this, even though last year’s HTC One Max
employed a fingerprint scanner on the back, so you’ll have to stick with
the regular methods of safeguarding your device.

iPhone 6 vs HTC One M8: Storage

There’s a microSD slot on the HTC One M8, so you can ramp up your internal storage up to an extra 128GB if you wish, while the iPhone 6 is locked down to 16GB, 64GB, 128GB varieties. Where’s 32GB gone? We’ll probably never know.

If you’re someone who is going to pack the device with loads of movies, music, films and apps you’ll get much more bang for your buck if you plump for the HTC One M8 and invest in a 128GB microSD card, as the top specced iPhone 6 with 128GB comes in at a rather pricey £699. Despite the bigger screen, the M8 still has the power to make it through two days. That’s helped by the more power efficient Snapdragon 801 and some really useful power saving modes to get more than a day out of it.

The iPhone 6 packs a bigger battery than the iPhone 5S but it is still smaller compared to the M8 and doesn’t have any dedicated power saving features. The new A8 chip much like the Snapdragon 801 aims to work more efficiently eand in the process boost battery life, although we don’t expect the Apple smartphone to beat the M8 for battery life.

Both these phones are at the top of the game, outshining almost everything else out there in terms of industrial design. The iPhone wins out, easily, on the camera, though the cheaper storage options on the HTC One M8 get that a thumbs up too.

Speed wise, they both offer snappy results, though the 64bit-ness of the iPhone may help it last that bit longer. It all really comes down to one thing – are you iOS or Android?