Battle of the super-sized flagship phones

With the launch of the Nexus 6, Google no longer seems content to offer high-value Android hardware. It’s gunning for the premium crown.

Add in its ample proportions and 6-inch display, and it becomes clear that the Nexus 6 is contending directly with the iPhone 6 Plus, Apple’s huge new phablet.

So which is shaping up to be the best bet?

iPhone 6 Plus vs Nexus 6: Design

Both phone makers – that’s Apple and Motorola, in case you didn’t know – have opted for a solid metal framework to support their huge phones, and the surface area of both is roughly the same.

But that’s about where the similarities end. Apple’s iPhone 6 Plus has a flat all-metal rear and a curved glass front, whereas the Nexus 6 has a curved plastic back and a flat glass front.

The Nexus 6 is a lot thicker than the iPhone 6 Plus, and a fair bit heavier to boot, but we reckon they both look great in their own way. 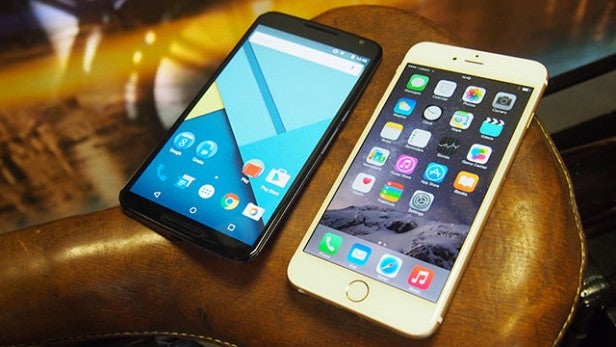 iPhone 6 Plus vs Nexus 6: Screen

The Nexus 6 display is a good half an inch bigger than the iPhone 6 Plus’s, but when you’re talking about phones this big, half an inch doesn’t count for as much as you might expect.

Far more important is colour accuracy and sharpness. Both displays are extremely sharp, but the Nexus 6 wins with a 2560 x 1440 QHD resolution. Of course, the iPhone 6 Plus’s 1920 x 1080 display happens to be the sharpest of any iOS device.

In terms of pixel density, that translates to 493ppi for the Nexus 6 and 401ppi for the iPhone 6 Plus – a clear, if not devastatingly conclusive, win for the Google phone.

As for the display type, the iPhone 6 Plus display is widely held to be the best LCD screen around. Of course, the Nexus 6 uses AMOLED panel technology, which means that it’s more vibrant and produces superior blacks. It remains to be seen if the colour accuracy is right – often the downfall of AMOLED – but it may well pip the iPhone 6 Plus here.

iPhone 6 Plus vs Nexus 6: Camera

Apple seems to have found a sweet spot with its cameras, sticking at the 8-megapixel mark and concentrating on boosting the size and quality of its lens arrays and image sensors, not to mention its peerless image-processing software.

Sure enough, what the iPhone 6 Plus’s camera lacks (relatively speaking) in megapixels, it more than makes up for with sheer image quality. Pictures taken with this phone look fantastic.

Apple has added super-fast phase-detection autofocus, which it shares with the iPhone 6. The iPhone 6 Plus, however, boasts optical image stabilisation for steadier shots and videos in low light.

The Nexus 6 also has OIS on its 13-megapixel camera. We don’t know how good the Nexus 6 camera is, but Motorola phones haven’t typically been particularly strong in this department in the past. We wouldn’t discount it, but the Nexus 6 has quite a task on its hands to match the iPhone 6 Plus camera. 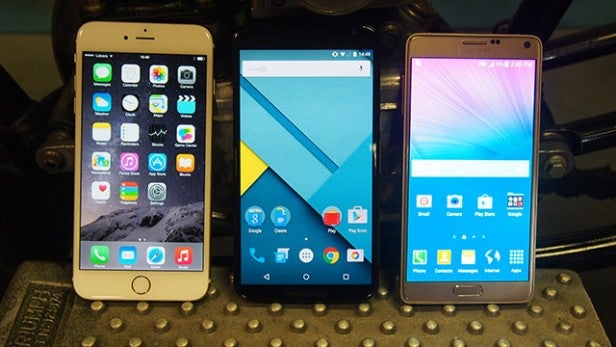 iPhone 6 Plus vs Nexus 6: Performance

1.4GHz doesn’t sound particularly fast for a modern smartphone processor, but you see Apple’s A8 can run at that speed for a relatively sustained period. Meanwhile the Nexus 6’s Snapdragon 805 can only sustain 2.7GHz for a very short spell. In real terms, they’ll be clocked at a similar rate for much of the time.

Elsewhere, the Nexus 6 appears to have the edge with double the number of cores and triple the RAM, but that, too, fails to tell the whole story.

Apple’s A8 chip is blazingly fast, with an advanced 64-bit architecture and one of the fastest GPUs in the business. Benchmarks show that, in terms of raw performance, the iPhone 6 Plus definitely has the edge here.

iPhone 6 Plus vs Nexus 6: Software

For Apple iOS vs Google Android read apples vs oranges. We’ve given up pondering which mobile operating system is best (well, we don’t do it as much as we used to), as both are so accomplished in general usage that it’s very much a matter of preference.

What’s more, both have taken steps to cover their weaknesses by borrowing a leaf from the other’s book. The latest Android, version 5.0, looks more stylish and behaves in a more unified way than any previous version, adopting an attention to detail that’s almost Apple-like.

Meanwhile Apple’s iOS 8 has adopted the kind of open stance on personalisation and third party inclusiveness that used to be Android’s exclusive calling card.

Whichever OS you opt for here, you won’t be disappointed. 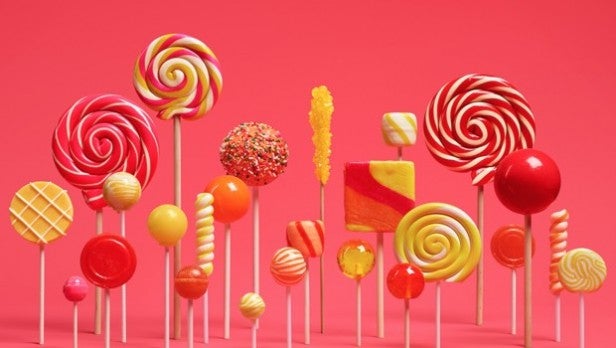 iPhone 6 Plus vs Nexus 6: Storage

The iPhone 6 Plus comes with a greater range of storage options, and the top tier offers a huge 128GB. There’s no equivalent Nexus 6 model.

However, at the opposite end of the scale, the entry-level iPhone 6 Plus comes with 16GB of storage, and we dare say that’s not much use to anyone. The Nexus 6, in contrast, starts at a much more reasonable 32GB.

We can’t offer a definitive judgement until we’ve reviewed the Nexus 6, but we do know that it’ll have to go some to topple the iPhone 6 Plus as king of super-sized smartphones.

However, early signs suggest that the Nexus is in with a good chance of matching or even surpassing Apple’s latest effort. It’s got an even bigger, sharper, and brighter display, and there aren’t many phones around that can claim that outside of the Samsung Galaxy Note 4.

The Nexus 6 also has its own distinctive premium design that comes courtesy of Motorola – and Moto’s turned out some of the finest Android phones of recent times. That’s another big tick in the plus column.

Finally there’s Android 5.0 Lollipop, of which the Nexus 6 will be the champion. This OS is looking genuinely exciting, and could well topple iOS 8 as the freshest, most forward-thinking mobile OS out there.

But there’s one simple fact that could well sway your decision towards the iPhone 6 Plus: it’s out now. With reports of severe Nexus 6 delays outside of the US, if you want a super-sized superphone before Christmas, there’s only one choice. Or two, if you count the Galaxy Note 4. But that’s a different article.

Next, read our guide to the best iPhone 6 deals