The Sony Xperia Z1 claims to have the best phone camera around. But is it really that much better than the iPhone 5S?

We took the two phones out for a photographic test drive to see what the Sony phone is really capable of.

The Sony Xperia Z1 and iPhone 5S represent two slightly different approaches to the phone camera. Apple increased the sensor size but not sensor resolution in the upgrade from the iPhone 5 to the 5S.

This has resulted in a 1/3-inch sensor of eight megapixels – each sensor pixel being 1.5 microns in size. The Sony Xperia Z1’s sensor is much larger, but because the resolution is so much higher (20.7 megapixels) the sensor pixels are actually a lot smaller. They’re 1.1 microns.

However, the phone doesn’t capture 20.7-megapixel images as standard. They are downsampled to create more manageable 8.3-megapixel files in the standard mode – they’re roughly the same size as the iPhone’s ones.

As well as a higher-resolution sensor, the Xperia Z1 has a slightly faster lens. It’s an f/2 lens where the iPhone 5S uses an f/2.2 lens. The lower the number, the more light gets to the sensor within a certain amount of time.

As you’d hope from a sensor that’s much higher resolution, the Xperia Z1 does capture more detail than an iPhone 5S in decent lighting. However, there is the clear look of a downsampled image here. Processing to increase sharpness is evident – something we also saw in the Lumia 1020’s downsampled 5-megapixel images.

Sharpness at the edge of the frame is much worse in the Xperia Z1, though. Where the iPhone 5S is sharp throughout, the Xperia gets pretty mushy at the corners. 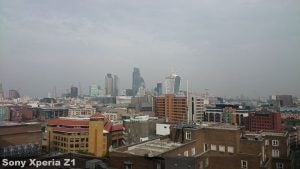 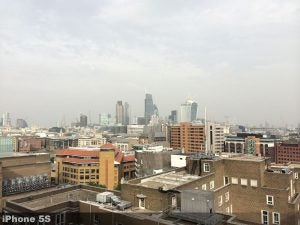 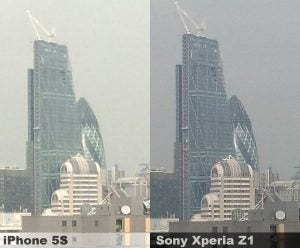 Downsampling results in very sharp 8-megapixel images, if not 20-megapixel ones 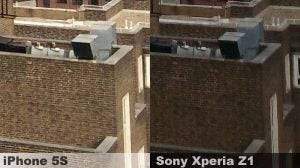 Edge sharpness is way off in the Xperia Z1

The theme of intense processing continues in the Sony Xperia Z1’s low-light performance. The level at which the Xperia Z1 can cope with very poor lighting is quite astonishing.

Pictures that would appear almost pitch black in some phones are bright and virtually noise-free in the Xperia Z1.

This is not magic, though. While we expected the Xperia Z1 to offer superior low-light performance thanks to its larger-than-average sensor, the jaw-dropping difference between the iPhone 5S and Xperia Z1 is primarily down to processing. And it’s processing that trades away detail in order to get rid of noise.

How bright our low-light scene appears below is quite unnatural too. 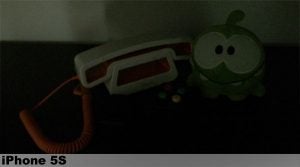 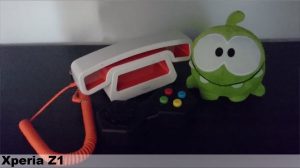 Given how obsessed the Xperia Z1 is at making its low-light photos appear bright, it’s surprising how glum its daylight shots can be. The phone tends to slightly underexpose its shots, leading to dull-looking images at times.

Colours are a little muted a lot of the time too. It’s a shame given the Xperia Z1’s fairly impressive photographic specs.

Side-by-side the iPhone 5S’s pics appear brighter and more lively – the exact opposite of what we saw in the low-light test.

Macro and Depth of Field

One area where the Sony’s slightly dodgy execution of the Xperia Z1’s camera doesn’t come into play is depth of field. 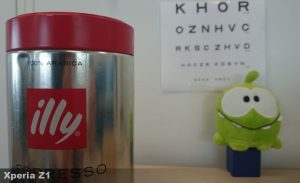 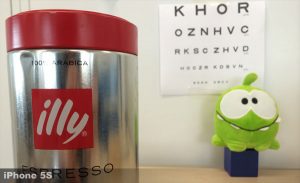 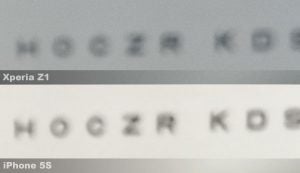 Blurrier = better in this test

The Sony Xperia Z1 has a much more interesting camera than the iPhone 5S. It has a larger sensor, higher resolution and a far more aggressive approach to photo processing.

However, it’s also far more problematic. Its performance is less consistent, and its photos can appear slightly anaemic. Plus its very aggressive approach to processing will turn off some.

For everyday casual shooting, the iPhone 5S is the more reliable, more enjoyable snapper. It’s hard to beat the Sony Xperia Z1 for taking shots in the pub, though.

Next, take a look at our best smartphone round-up