The iPhone 5S is easy to use. However, it has bags more features than the early iPhones. To keep it as simple for technophobes, Apple has had to carefully hide away a few of the things it can do.

We’ve uncovered a few of the extras we think you should know about. 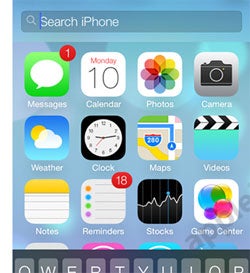 To bring up the search bar, just drag downwards on a home screen – but not the very top of the screen, as that brings up the notifications bar. Then just tap in your search term and you’re away. We find it the perfect antidote to a packed, not-entirely-organised app collection.

Use the volume up key as a shutter button
Most people use the iPhone 5S’s touchscreen as the way to take photos. But there is another way.

As standard, you can use the iPhone 5S’s ‘up’ volume key as a shutter button when in the camera app. It makes using the iPhone as a photographic tool feel a lot more like using a compact camera.

Recording slo-mo videos
Our favourite video feature of the iPhone 5S is the slo-mo mode. It records footage at 120fps in 720p resolution.

Finding it is very easy – just flick right to left on the screen of the video part of the camera app until you hit the slow motion mode. However, we find it’s a mode few people make much use of. It’s the best way to capture fast action, or just toddlers tearing around the house, so try it out. The limitation is that no audio is captured in slo-mo mode.

Adding emoticons to your keyboard
One of the odd things left out of the iPhone 5S is the emoticon menu in the keyboard. Perhaps Apple just wanted to keep things simple and stylish-looking, but we think it’s something the majority of iPhone users would find useful.

You can easily bung it into the standard iPhone keyboard from within the Settings menu. Just go to Settings > General > Keyboard > Keyboards > Add New Keyboard > Emoji to get your iPhone 5S rammed full of cute keyboard characters. You don’t just get smileys either, but all sorts of little graphics including animals, symbols, flags and numbers.

Correcting Siri’s pronunciation
If Siri mis-pronounces a name, you can correct it. You do so by literally telling Siri “that’s not how you pronounce [name]”. Siri will then give you a bunch of different ways it can say the name, letting you choose the closest to the real thing.

Of course, Siri is still a virtual being whose voice synthesiser doesn’t have the sophistication of a human voice box. But at least it tries. 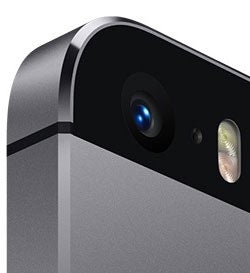 Using the LED flash for notifications
If you’ve come to an iPhone 5S from an Android phone, one thing you might miss is a notification light. The iPhone 5S has no front LED light.

However, you can use the camera LED as a notification tool, making it flash when you get a new text message, email and so on. To switch this on, go to Settings > General > Accessibility, then scroll down to the Hearing header, under which you’ll find an ‘LED flash for alerts’ mode slider.

Best iPhone 5S cases
The best type of iPhone 5S case to use is one that covers just about every part of the phone, apart from the screen. We find this more in the iPhone 5S and iPhone 5 than previous versions, because of what these phones are made of.

They have aluminium bodies – aluminium isn’t a particularly hard metal, and is therefore quite prone to scratches. If you don’t want to hide the look of the phone, and don’t want to spend a load of cash, we recommend a simple polycarbonate (plastic) crystal case that covers the back and sides of your iPhone 5S, and will absorb any impact damage – and avoid cracked screens.

Making the perfect iPhone 5S wallpaper
iOS 7 can use parallax wallpapers, images that scroll a little as you flick between home screens. However, this also means that you can’t simply make an image the size of the iPhone 5S’s screen and expect it to work well as a wallpaper.

The resolution to use for your iPhone 5S wallpapers is 1,536 x 1,040 pixels, in order to get the full parallax effect. Use wallpapers the same size as the phone’s screen and there will be no parallax effect at all. 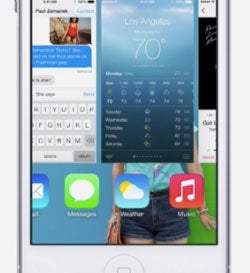 Using multitasking
To use the iPhone 5S’s quick app switching mode, quickly double-tap the home button to bring up the multitasking menu. This shows a scrollable row of all the apps currently ‘parked’ in stasis on your phone. To close one down, just flick up on the preview display that shows what the app is currently up to.

To head into an app, just tap on one of these preview displays.

Use the feature toggles to save battery
A software feature Apple has seemingly nicked from Android for the iPhone 5S is a set of features toggles that let you quickly turn things like Bluetooth and the airplane mode on and off.

You’ll find these toggles in the menu that pops-up when you flick from the bottom of the screen upwards. They include airplane mode, Bluetooth, Wi-Fi, Do Not Disturb and rotation lock. This menu also lets you change screen brightness. These controls are the key to getting more battery life out of your phone.

How to hack an iPhone 5S
A full ‘jailbreak’ hack has been released for the iPhone 5S. It is called Evasi0n, and its main aim is to let you run unsigned code on the phone. For the average person, the main benefit is getting the Cydia app store installed. This is an ‘alternative’ app store that offers apps that let you do things like customise to the way iOS looks and feels. Apple doesn’t allow anything like this with ‘normal’ apps.

We don’t recommend doing so yourself – it invalidates your warranty (as it’s contrary to the terms of use) and may brick your phone – however, it is very easy. It’s now just a case of downloading Evasi0n, plugging in your phone, then following some on-screen prompts. However, make sure you only download it from the official Evasi0n site. Unscrupulous types may try to charge you for jailbreaking code – and then heaven knows what you’ll actually be downloading.

You can use the Touch ID with things other than your fingers
One
of the best hardware improvements in the iPhone 5S is the new Touch ID
sensor – marked by the silver ring around the Home button. This is a
fingerprint scanner that lets you unlock your phone without using an
annoying passcode.

As convenient as a fingerprint is, it’s not
the only surface you can use. The Touch ID sensor is a capacitive
scanner, and can recognise just about any suitable surface. A nipple, a
dog’s nose, a nose and all sorts of body parts have been used with the
sensor – you just have to teach the phone how. Up to five different
‘fingers’ can be recognised the Touch ID panel. To teach it a new one,
go to Settings > General > Touch ID & Passcode > Touch ID.