We’re just a day from Apple’s next big product announcement, which kicks off on 12 September 2012 at 6PM GMT. We’re 99.5% certain it’s when the iPhone 5 will be unleashed, but what else is Apple CEO Tim Cook likely to show off?

iPhone 5
Let’s get the obvious one out of the way first. Tomorrow, we’re going to see the iPhone 5 in all its glory. It’ll sell millions within days, and more drool will be deposited on more carpets in the next 72 hours than there has been since last year’s iPhone 4S unveil.

But what will it offer? Our survey says that a 4in widescreen display is a definite, as is a tweaked design. The iPhone 5 will be thinner than the 4S, in part down to the advanced screen architecture, which squidges the display layers together to get thickness well under 8mm. It’ll make the iPhone 4S look positively morbidly obese. Well, sort of.

New iPod touch
Here’s an interesting one – there will apparently be three new iPod touch models appearing on 12 September. The two higher-end versions will feature a design based on the looks of the iPhone 5, while the cheaper model will keep the shiny chromed back of the 2010 and 2011 editions.

However, all three are likely to use the new iPhone 5 connector. Apple is about to throw out the decade-old 30-pin socket, and replace it with a smaller 9-pin version. This will be around the size of the smartphone-standard microUSB port, taking up much less space than the chunky 30-pin type.

Storage capacity is unlikely to increase, though – the 64GB ceiling will probably remain. One new feature that has some great potential, though, is NFC. This stands for Near-Field Communication, and will let you buy stuff on the high street with nothing more than a device like the iPod touch.

New iPod shuffle
Can’t afford an iPhone? Can’t afford an iPod touch either? Apple is rumoured to be prepping a new iPod shuffle. It’s not going to be a particularly exciting upgrade, but 9to5Mac writes that top memory capacity will increase (it’s currently capped at a piddly 2GB) and the price will come down. It may even drop under £30 – worrying for MP3 player makers like SanDisk.

As the iPod Shuffle doesn’t currently use the 30-pin connector, but a cable that jams into the headphone socket, Apple doesn’t really need to update the physical interface here.

New iPod nano – with Wi-Fi
The most interesting of the iPod-series updates, though, is the nano. It’s about to get serious, with integrated Wi-Fi and a larger design that’s a bit more like the iPod nano of 2009. It’ll be taller, and have a larger screen than the teeny current model. 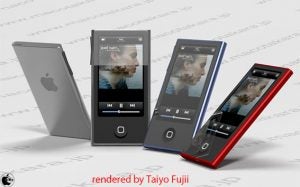 What we’re wondering is – how will Apple make use of the iPod nano’s Wi-Fi? Will it just feature an inbuilt email app, or will, by some technical miracle, we be able to use iPhone apps? We seriously doubt the latter, although with the help of a retina display-style screen, the resolution of the iPhone 3GS could be packed into a 1.8in display. Anyone fancy playing Angry Birds on a display that small? Thought so, us neither.

NO iPad mini
After months and months of speculation, it seems like Apple will not launch the iPad mini on 12 September, but will instead leave the launch of the small tablet for October. Why? It’s likely to let both the iPhone 5 and iPad mini make the impact they deserve – making them fight each other for prominence wouldn’t be the best idea.

No more iPod Classic?
It could be the end of the road for the trusty iPod Classic, the device that defined the MP3 era and all-but killed the compact disc. To date it has avoided the chop, simply receiving no mention at recent Apple events. However, the introduction of a new socket could mean it’ll quietly shuffle of into the twilight. Then again, it might also just hang around on the Apple Store for a few more years, a silent reminder of years gone by.

Which new Apple product are you most looking forward to? Let us know in the comments.