OPINION  With the iPad mini with Retina display (aka iPad mini 2) finally going on sale this week, now seems as good a time as any to think about the future of the iPad. Like it or lump it, the iPad remains a torchbearer for tablets in a way the iPhone no longer is for phones. Cheap Android tablets like the Nexus 7 have eaten into its market share, but Apple remains dominant both in revenues and mind share.

And this is a problem because the current iPad line-up feels like it has reached a evolutional precipice. The iPad mini, introduced last year, neatly tidied up a blindspot in the line-up, while this year’s iPad Air has done all it could to refine the larger format. Cyncism may rule some quarters of the internet, but I’ve moved from an iPad 2 to an iPad Air and to me the difference between the two is palpable and more than a little liberating. It’s a damn good evolution.

But, as Ben Thompson of stratechery pointed out shortly after the most recent announcements, Apple seems to have forgotten the ‘why’ part of the argument for the iPad. Neither of this year’s iPads advance the argument, and it’s hard to see what Apple could do next year without some serious changes in approach in both software and hardware.

Enter the iPad Pro
Which brings me to my personal favourite notional next step: an iPad Pro. Apple’s choice of name for this year’s iPad, iPad Air, neatly fits this line of speculation. MacBook Air/iPad Air and MacBook Pro/iPad Pro has a nice symmetry to it, so much so that even a minor league mind such as mine can draw the connections.

Of course, it could all be coincidence and I claim no special knowledge here, but there’s a reasonable argument to be made that: a) Apple has a specific interest in ‘pro’ uses for the iPad; and b) an iPad Pro makes commercial sense and potentially gives many people something they dearly want, me included.

Professional vs Pro… or how Apple sees the world
I’ll return to those two points in a moment, but it’s worth taking a small diversion at this stage to think about what ‘Pro’ actually means. Or, more specifically, what it means to Apple, because its idea of ‘Pro’ rarely tallies with the traditional view in PC land.

You need look no further than the MacBook Pro range for clues. What Apple doesn’t do is pander to the old school ‘corporate’ ideal of the professional PC, which is why it doesn’t create docks and other paraphenalia. In recent times its dropped optical drives, dropped matt screen options and has generally done the kind of things Apple always does: simplify.

The key takeaway is this: Apple won’t do a Microsoft. An iPad Pro doesn’t mean bringing a Mac OS/iOS hybrid to the iPad format, it means extending iOS and the iPad to make it more powerful, more flexible and more useful to people who want to do more than browse the internet, play games and watch video without losing the simplicity and accessibility iOS brings to the iPad. 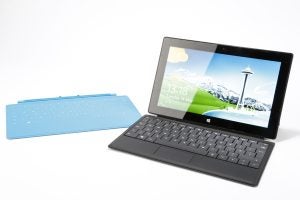 Whatever Apple does, it’s unlikely to be a hybrid PC like the Surface Pro

Following the breadcrumbs
Diversion safely navigated, it’s time to return to the current state of things, where they could lead and the two points I so hastily dropped a moment ago.

Let’s start with the first, Apple’s interest in ‘professional’ uses of the iPad. Just re-watch the recent iPad launch to see this and this becomes obvious. Its usual showreel went out of its way to show people using the iPad in unexpected, practical ways: in hospitals, on planes, in retail stores, on… combine harvesters?!

It’s by no means a new trend, either. Apple has championed these uses for years, no doubt to promote the iPad as the practical post-PC device Steve Jobs spoke of. He used to talk about the intersection of the liberal arts and humanities. But perhaps this is too limiting a definition now, which would explain why Tim Cook is yet (to my knowledge) to utter it.

The point remains, though, that the idea the iPad is just a consumption device is very out of date. It might be true for some people, but for many others it’s for creating and working, as the huge range of apps and accessories show.

Apple’s recent moves show it recognises this, too, even if its execution and inclination is still ‘pro-lite’ right now. Making the iWork apps free and creating the bridge between desktop and iPad in the shape of iWork on iCloud are all steps in the right direction to creating a tightly integrated producitivity ecosystem. It also, very quietly, added a load of extra keyboard shortcuts in the most recent iOS release, surely acknowledging that some people would find them useful.

It’s very early days yet, but Apple has shown its intentions here and made much play in pitting its solution to the more serious, ‘po-faced’ and expensive Microsoft solution: Office 365. No one should seriously compare the two, but Apple’s instinct (like Google) is that it can eat some of Microsoft’s lunch by offering ‘just enough’ for people who need it – as opposed to Microsoft’s five course meal for a snack option. 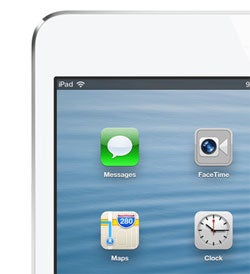 For Apple, it would create an upsell for existing iPad owners, and attract new ones who perhaps always hankered after something more practical. It would also have the added benefit of blowing a hole in Microsoft’s Surface strategy, as an iPad Pro no doubt would if executed correctly. Microsoft appears to be the only serious rival at the high-end of the tablet market, so cutting it off before it gathers any momentum would be a wise move.

There’s another, less obvious, reason to make an iPad Pro, too: as an upgrade path for MacBook Air owners. A glance at recent PC sales show even Apple is now feeling the pinch of slowing computer sales. Admittedly it’s also a beneficiary as some of those sales have gone to iPads, but it’s harder to sell new MacBooks when the reasons to upgrade decrease every year. A more expensive iPad Pro is a more lucrative alternative (for Apple) than either an iPad or a ‘no sale’.

For consumers, meanwhile, an iPad Pro ought to deliver on all the things many people already do on their iPads just with fewer compromises. Keyboards are a case in point, as the current iPad Air isn’t large enough to accomodate a ‘full size’ keyboard accessory in the same way as the Surface 2 or Surface Pro 2. Opting for an 11/12-inch display, as has been rumoured, would alleviate this problem. Moreover, Apple’s weight saving for the iPad Air would likely allow it to make a larger iPad Pro at a similar weight to the ‘old’ iPads.

The other potential avenue of opportunity is… whisper it… a stylus. Yes, yes, I know, Steve Jobs ruled it out all those years ago, but Steve Jobs denied many things that later came to pass. Moreover, Microsoft has already showed you can have a great stylus and ‘finger’ experience on a tablet in the shape of the Surface Pro. A Surface Pro, let’s not forget, that numerous artists (e.g. Ben Kuchera from Penny Arcade) have lauded as a great creative tool. Apple isn’t the ‘creative professional’ company in the way it used to be, but I’m certain quarters of Apple doesn’t like the idea of losing such customers to Microsoft.

The real challenge for Apple, however, should it choose to make an iPad Pro, is how to make iOS more iPad friendly — assuming it doesn’t merge Mac OS and iOS, which I’m pretty sure it won’t (not yet, at least).

I like iOS 7, but it’s plain to see it was designed for iPhone. There are very few, if any, serious efforts to tailor it to iPads. Apple gets away with this because the App Store compensates for it and the iPad hardware is unmatched. But I can’t believe Apple doesn’t acknowledge (internally) that it could do so much more with the iPad’s software.

An iPad Pro would be the perfect opportunity to be more ambitious while retaining the accessibility that makes iPads so popular. I’m not go into how it would do this, mainly because it would take too long and I’m not a software engineer or designer. But when I look at my iPad, which I love, I always yearn for a little more… and a little more doesn’t mean widgets. Widgets suck (mostly).

Conclusions
I’m not the first to discuss this idea, and I won’t be the last. But I believe that an iPad Pro is a far more likely product than the much talked about iTV, or even an iWatch. I’m not saying either won’t happen (though I have serious doubts about iTV), just that an iPad Pro is a more logical next step.

Not only would it extend an already successful product range, it would head off Microsoft’s challenge and fill a niche not satisfactorily filled at present. To some minds the iPad is still a toy, and an iPad Pro would be the perfect riposte.

Next, read our iPad Air review