Following the main event that was the iPad Air 2, the iPad mini 3 has launched alongside the bigger Apple tablet. But how does it compare to one of the finest Android tablets out there, the Samsung Galaxy Tab S 8.4?

It’s not hard to see why there were so few clues concerning the iPad mini 3 ahead of its unveiling. It was brilliantly camouflaged on the Apple supply line, posing artfully as an iPad mini 2.

Cheeky quips aside, the iPad mini remains a very good compact tablet. But has its lack of advancement made it susceptible to attack from the Android elite?

Let’s pitch it against the Samsung Galaxy Tab S 8.4 and see what happens.

The iPad mini 2 was the best-looking and best-feeling compact tablet around. The iPad mini 3 looks and feels identical, with the subtle enhancement of a new gold model and a flush Touch ID home button.

That means that the mini 3 takes the crown by default, with its slim aluminium body and chamfered edges still a mile ahead of anything else.

Let’s face it, while the plastic and faux-leather Samsung Galaxy Tab S 8.4 is a lot of things, handsome it is not. It is a fair bit lighter, though.

Apple’s IPS Retina displays are the best LCD screens in the business, and the iPad mini 3 looks to continue that. Its 7.9-inch screen combines with a 2048 x 1536 resolution to produce 326ppi – that’s exactly the same pixel density as the iPhone 6.

Of course, the Samsung Galaxy Tab S 8.4 display is bigger at 8.4-inches. What’s more, with a 2560 x 1600 resolution, it produces a higher pixel density of 359ppi. To top it all off, the Galaxy Tab uses AMOLED panel technology to create a more vibrant, higher contrast picture.

Of course, we the iPad mini 3 hasn’t been released yet, but we’re pretty confident the Samsung wins this one. 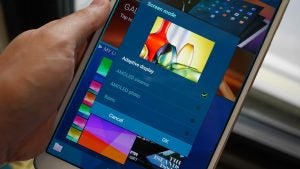 The iPad mini 3 sports exactly the same A7 CPU as last year’s model, which is undoubtedly a little disappointing.

Get past the downer of not having a spangly new piece of silicone to boast about, however, and you’ll realise that the 64-bit Apple A7 chip remains one of the fastest on the market. Apple was right to boast about it at the iPhone 5S’s launch.

Benchmarks showed last year’s iPad mini 2 to be faster than the Samsung Galaxy Tab S 8.4 in almost every way, which means that the iPad mini 3 is too.

The iPad mini 3 has a far more generous array of storage options than the Samsung Galaxy Tab S 8.4, with the lowest of these corresponding to the sole 16GB Samsung option.

One advantage that the Samsung has, though, is the ability to fit it will a microSD card. This can carry the device right up to and beyond the top iPad mini 3 model.

The Samsung Galaxy Tab S 8.4 has a seemingly superior camera set-up, with both the rear and front cameras squeezing in more pixels than the iPad mini 3 equivalent.

However, in practice they’re likely to be much of a muchness, assuming that Apple hasn’t improved the mini 3’s snapper from last time.

Both can be said to take pretty decent pictures for a compact tablet – which isn’t really saying that much, admittedly. 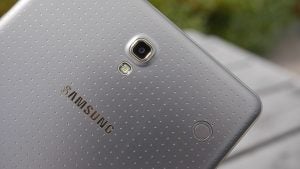 As always in these comparisons, one of the biggest differentiating factors is the OS each tablet uses.

The iPad mini 3 may be a relative disappointment, and the Samsung Galaxy Tab S 8.4 may have wowed upon its release, but the former still has the better tablet software.

Apple’s iOS is better than Android on tablets, thanks to better optimisation and (particularly) a vastly superior selection of tablet-specific apps.

Early signs suggest that the iPad mini 3 is the weakest tablet update Apple has ever launched. It’s essentially an iPad mini 2 with Touch ID stuck on.

Despite that – and despite our rave review of the Samsung Galaxy Tab S 8.4 earlier in the year – we’d still choose the iPad mini 3.

That’s because the iPad mini 2 remained the best compact tablet around right up until the launch of its successor. That the iPad mini 3 is only the slightest smidgen better is besides the point when it comes to a straight up comparison.

It’s nicer to hold, it’s faster, and it has superior software.