Journalists are supposed to be good at English, but on 27 January 2010 history will show we suffered a global outbreak of illiteracy. While Steve Jobs’ iPad unveiling keynote overloaded on the adjective ‘magical’, professional reporters fixated on his use of ‘simple’ as a noun. Headlines declared the iPad was foolish, Apple had been ignorant of its customers’ needs and gullible in believing that iOS could be slapped onto a ‘big iPod touch’ with positive results. This month, three years since the iPad first went on sale, we include ourselves amongst journalists who were taught a grammar lesson we will never forget. 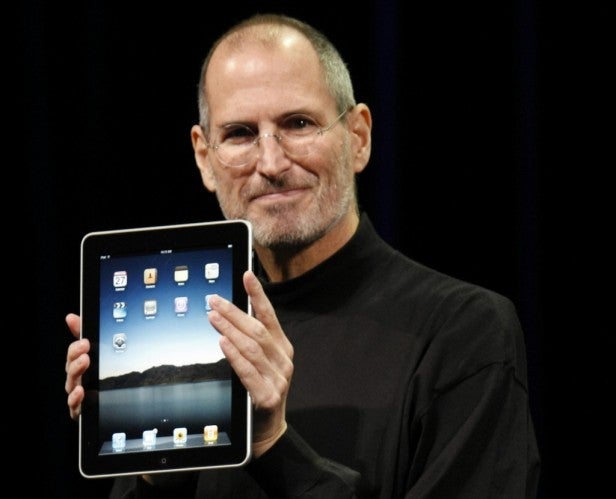 Elementary My Dear Watson – Sherlock Holmes
Of course the iPad didn’t just ram home the importance of simplicity and its infinite number of positive linguistic interpretations, it created a mantra for the evolution of the computer industry. The result is been a drive to strip away the complexities long deemed part and parcel of computing (driver maintenance, anyone?) and push intuitive functionality in the form of bite size, affordable apps to the forefront. Presented with the blank canvass afforded by tablets’ sizable touch-screens developers have responded in their droves.

Furthermore, everything representative of a time before we became obsessively touchy feely is fast being swept away. Netbooks were the first casualty. The promise of an affordable, if compromised, PC experience on the move went from ingenious to antiquated almost overnight. Deemed a breakthrough with the launch of the Asus Eee PC in 2007, at the start of 2010 services firm Morgan Stanley estimated annual netbook sales of 42.7 million during 2012. Instead by December 2012 every major netbook maker had abandoned the category. Unsurprisingly Asus was the last to go, giving up the ghost in December.

Since then Mac OS has modelled its future on iOS, Windows 8 does a great impression of Windows Phone and talk of the first ‘Androidbook’ hit the press this week. The once-bonkers iPad model of applying a phone operating system to a tablet is now not only the norm but, as sales threaten to overtake PCs, a survival drive desktops and laptops are being forced to follow.

“Simple Is As Simple Does” – Forrest Gump
While the iPad is a categorical success, the extent has left a significant mess in its wake. Apple was undoubtedly thrilled to see it first fracture Android into phone and tablet editions then divide customers over Microsoft’s ‘hybrid’ Windows 8, but it isn’t just rivals who have suffered.

The scale of the iPad’s success has clearly also confused Apple and left it startled like a rabbit in the headlights. Unlike Microsoft, which has at least taken the plunge with Windows 8, Mac OS X has spent three years paying increasing graphical lip service to iOS as it runs out of point releases and big cats to name updates after. It’s as if Apple has yet to work out what OS XI should be: a potentially disastrous hybrid drawing Windows 8-levels of criticism or a full port to iOS which would destroy invaluable legacy software, especially for professionals.

At the same time iOS itself appears dumbstruck. The impression is Apple has become scared to make any major changes in case it alienates the iPad’s huge mainstream, tech-phobic user base. As such it just keeps tweaking and releasing incremental hardware updates. Having blown all of its major rivals away for the last three years, Apple’s subsequent behaviour suggests that the company was almost as stunned as they were. 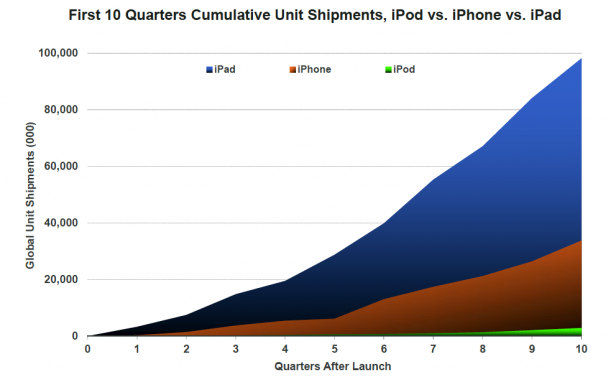 “Simplicity is the ultimate sophistication” – Leonardo da Vinci
Still Apple remains in the box seat of a simplicity revolution it created. In just three years our social, professional and educational lives have been turned upside down as tablets fuel the fastest technological take-up in human history. Apple’s own sales data (above) shows iPad growth exponentially outstripping the iPhone since launch and a Flurry report in August claimed iOS and Android device adoption has consequently been 10x faster than the 1980s PC revolution, 2x faster than the 1990s Internet Boom and 3x faster than the adoption of social networks.

It may not have invented the tablet form factor, but Apple had the foresight to take the software from its phone and stick it onto a big iPod touch. Magical? Maybe not. Inspired? Certainly. Simple? Fundamentally. Three years ago we were a part of the technology press that were taught a grammar lesson. Now we all speak a new language…