The new big iPad is the sixth generation of the Apple tablet since the first one launched back in 2010. Since then there’s been a stream of tablets trying to knock the our pick of the best tablet off its lofty perch.

Some have fared better than others and in the Samsung Galaxy Tab S 10.5, Apple’s fiercest rivals has finally come up with a tablet worthy of being named in the same sentence as Apple’s 9.7-inch tablet.

Does the iPad Air 2 have enough in its locker to stave off the competition once again? We compare specs to see how it matches up to its closest competitor.

If you thought the Samsung tablet was slim, well Apple has just gone and trumped it. The 6.1mm thick aluminum frame makes the new iPad Air the slimmest tablet out there. The Samsung might not be as svelte or have the aluminium metal body but it does have a more aesthetically pleasing dimpled soft touch rear to go with its featherweight frame. The bronze-gold colour scheme won’t be for everyone but as 10-inch Android tablets go, the build is way out in front.

We’d say the Apple tablet just edges it though.

Apple hasn’t budged on the resolution for the new iPad Air sticking to the same 2,048 x 1,536 resolution as the last Air. That’s not a bad thing really. It means you can expect similarly impressive contrast, colour reproduction and sharpness. Where things do change is that the Apple is adding a new anti-reflective coating it claims gives it the lowest reflectivity making it better to use in the bright outdoors.

That’s not to say the Galaxy Tab S 8.4 doesn’t impress in this department. It definitely won’t let you down for watching videos or reading and is the tablet’s standout feature. The Super AMOLED screen is brighten vivid, sharp and clear delivering exceptional contrast and black level helping photos and films looking rich in colour.

Both tablets should be great performers here and it will be difficult to separate them. 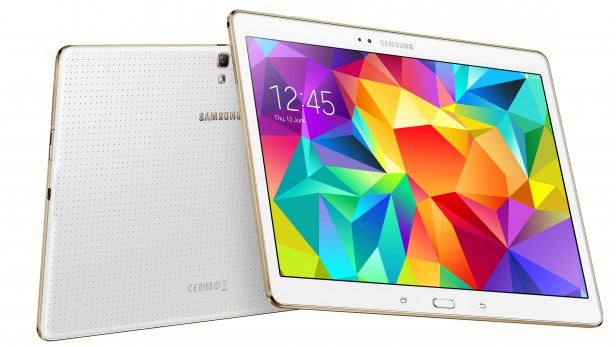 As rumoured, Apple is using a new A8X processor and its a 64-bit one just like the A7 found inside the iPad Air. Apparently it will be 12 times faster than the first iPad and graphics are going to be 180% faster than the first ever Apple tablet. Along with the new Metal development framework announced in iOS 8, the new iPad Air should be a gaming powerhouse.

It’s packing the new M8 motion co-processor as well to track motion and introduce new sensors like a barometer, third party app developers will no doubt want to take advantage of.

The Galaxy Tab S 10.5 is no slouch though. There’s a Exynos 5 Octa (5420), which is in eight core chip with four ARM Cortex A15 CPUs clocked at 1.9GHz, and four lower-power ARM A7 cores at 1.3GHz. It’s one of the most powerful processors on any Android tablet or smartphone and while it’s less impressive in the graphics department, it will still run the most demanding games smoothly.

We think these two will be evenly matched in this department.

Just as Apple did with the iPhone 6, it’s ditching the 32GB version of the Air so there’s going to be a big jump in price depending on what model you go for. There is as always a lack of micro SD card support and the company is unlikely to change its stance on this but you can always turn to Apple’s iCloud storage if you want some more room.

If you value expandable storage then there’s only one pick here. The Tab S packs an micro SD card expanding the space to store files up to 128GB. You always have the option of cloud support as well if you pick the right services like Dropbox for instance where he Samsung Tab S will often.

MORE: Google Drive vs iCloud Drive vs Dropbox vs OneDrive 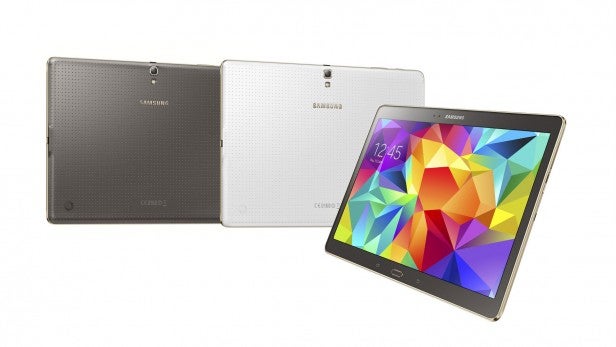 Like the iPhone 6, the new iPad runs on iOS 8.1 and while iOS 8 had some ‘issues’ it makes plenty of improvements and is still one of the easiest operating systems to use. You might not be able to customize in the way that you can with Samsung’s Android and TouchWiz UI mash-up but new features like interactive notifications, third party keyboard support help address some of its limitations

The Tab S runs on the latest available version of Android with its TouchWiz UI on top and it’s the nicest looking the operating system has looked for some time adding some useful and not so useful features. There’s Samsung’s Knox security software to appeal to business users but the Multi-Window is pick of the bunch letting you run apps side-by-side. It’s definitely more useful on larger tablets as well.

For customization its Samsung, if you want simplicity and ease of use, then Apple’s tablet is the one.

Apple says the feature iPad users like the most is the camera so it’s getting some major improvements. There’s an 8-megapixel resolution sensor with new modes like Burst mode, TimeLapse mode and the ability to take panoramic pictures. The new AX8 processor will also help to ramp up the image quality.

Up front is a new FaceTime camera with a f/2.2 aperture to take in more light and should lead to more impressive selfies. Additional new modes including single-shot HDR photos and burst selfies.

When you are shooting video, there’s a new HDR mode and the ability to record slow motion videos at 120fps.

Leaked prior to the announcement, the iPad Mini 3 will get the Touch ID treatment, which means you’ll be able to use your fingerprint to secure the tablet, use it for Apple Pay and enjoy the added third party app support for apps like 1Password and Evernote.

Taking out the Samsung tablet to take pictures is not quite as bad as snapping with a 10-inch slate but it’s still an unspectacular performer. It’s decent but you probably won’t swap your phone camera for it. The same can be similarly said about the front-facing camera.

Like the iPad Air 2, it also has a fingerprint scanner baked into the home button and will work with select third party applications like Paypal to authorize payments or if you simply want to secure tablet.

Until we’ve had a play with the iPad Air 2, it’s impossible to tell how it matches the Samsung Galaxy Tab S 10.5 but on paper it has all the things to make it the best again. It’s thinner, has the new processor, plenty of optimized apps and still has gorgeous design.

When you compare the prices, the 16GB Wi-Fi only Galaxy Tab S costs £399 while the same 16GB iPad Air 2 Wi-Fi model costs exactly the same. There’s only one Samsung model to choose from as well with Apple offering 64GB (£479) and 128GB (£559) models. Both Apple and Samsung offer 4G models too, but they obviously require a lot more investment.

We’ll wait and see as to what our final verdict will be when we get the iPad Air 2 in to review.