At WWDC 2014, Apple introduced a whole stack of exciting new software features for both its mobile and desktop operating systems.

We’re genuinely looking forward to many of the iOS 8 and OS X 10.10 improvements Apple is set to make. In particular things like being able to take phone calls on our Macs, and seamlessly continuing emails and web browsing sessions as we move between devices, look tantalisingly useful.

However, those with knowledge of Apple’s history and way of doing things will be unsurprised to note that it appears to have, how shall we put this, “borrowed” many of those new features from elsewhere.

Here are ten of the most obvious examples. You can probably name some original apps that predate these examples, but these are some of the best known – or simply the best – out there.

Apple’s addition of Notification Center to iOS 5 was itself borrowed from Android, so it’s perhaps unsurprising that iOS 8 will also borrow from its great rival in the way that it deals with incoming messages.

iOS 8 will enable you to respond to emails, text messages, Facebook posts and the like from within the little notification banners that appear at the top of the screen. You won’t have to quit out of what you’re doing to deal with them.

Just like Android has been doing for ages now, then.

iOS 8’s revamped iMessage app will let you push a virtual button to record a voice or video message from within a conversation thread, which will then send as soon as you release your thumb.

It’s a bit like an advanced walkie talkie, really. It’s also a lot like the premise of the three-year-old Voxer app, as well as a recently announced feature from the IM champ, WhatsApp.

Related to that last point, those instant video messages can be set to self-destruct after a preset amount of time. It’s a feature that will prevent your iPhone from getting too clogged up. It’s also a feature cribbed from the hugely-popular-with-the-kids (innit) Snapchat app.

Just one more on the subject of messaging – it will also be possible to share your location with contacts on a map. The amount of time that this will show up will be time-limited, so you don’t have to worry about being stalked by your future ex or anything like that.

Great idea, eh? Yep. It was also a great idea when the founders of Glympse thought of it back in 2008.

Predictive keyboard
Borrowed from: SwiftKey/every virtual keyboard out there 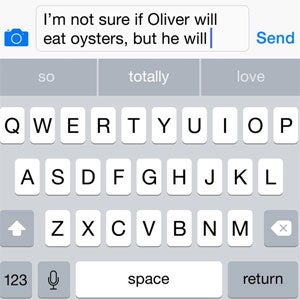 Apple’s new QuickType keyboard for iOS 8 stands as the first notable improvement of iPhone text input since the very first version back in 2007. It promises to provide predictive word recommendations based on the first few letters of each word typed, enabling you to auto-complete them with a tap.

It doesn’t matter how smart Apple’s implementation is, though – it will still be extremely late to the party. Third party Android apps like SwiftKey have offered a very similar service for years, while even Google’s stock Android keyboard and Microsoft’s stock Windows Phone keyboard beat Apple to the punch.

Interestingly, the aforementioned SwiftKey and its competitors will soon we winging their way to the App Store, as Apple had removed its third party keyboard restrictions for iOS 8. 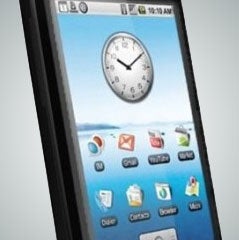 In the early days of Android, when Google’s mobile OS was still ugly and clunky and lacking in apps compared to iOS, its early adopters had but a few precious points to crow about. One of those was widgets.

These were little active app icons that sat on the homescreen, providing glanceable live information without having to go into the source apps.

So you see, Apple’s addition of widgets to iOS 8’s Notification Center might be slick, allowing you to monitor your eBay bids and such like, but it’s far from original.

It’s a problem we’ve all encountered over the years: you email over a bunch of photos to your friends or family, only to find the recipient’s email client throwing them back in your face on the grounds of being too big.

Apple’s solution: Mail Drop, which will send the recipient a specialised link to enable them to download said files from iCloud storage.

Which is basically what YouSendIt, now known as Hightail, started doing for us ten years ago, and which Dropbox (again) and the like have been refining ever since. 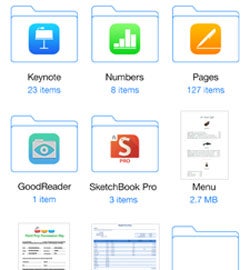 For Apple’s next
desktop operating system, Yosemite, it will expand its iCloud service to
include a more fleshed-out file system. You’ll be able to add files to a
Finder folder, which will then sync to the cloud and be accessible from
your other devices.

Now where have we seen that before? Oh yes,
Dropbox. Apple’s improved cloud solution will even work on Windows
computers, which is another obvious attempt to elbow out the current
cloud storage king.

Spotlight, Apple’s universal search and launcher function, will receive a major revamp in OS X 10.10. When called up, it will manifest as a chunky text field in the middle of your homescreen, and will pull up predictive results from your documents, emails, apps, and even the web as you start to type.

It looks very cool indeed, but it’s hardly a new concept. The likes of LaunchBar and Quicksilver have offered a similar universal launcher function for years now, while in more recent times Alfred has provided an intuitive yet powerful universal search field that doubtless influenced Apple’s engineers.

When you attach photos to your emails in the OS X 10.10 Mail app, you’ll be able to annotate them using a feature called Markup. It will enable you to draw arrows and speech bubbles and magnify key areas to really bring new life/puerile humour to your messages.

Without wanting to sound too punsome, Apple appears to have drawn on the efforts of the Skitch team here. Skitch is a free OS X app that lets you quickly edit, annotate, and share screenshots and images in a somewhat frivolous way.