There were stacks of innovative ideas at IDF 2014 – Intel’s annual forum for developers that ended yesterday. There were inspiring stories from Intel’s army of Makers (or inventors), cute products and ground-breaking ones. Most of all there was a real sense of discovery and wonder at what the future of technology has in store. Here are just some of the highlights.

Intel is the first chip manufacturer to build chips using 14nm technology. What this means is that transistors are smaller so that more of them can fit on to a chip. This leads to all sorts of benefits such as better performance, lower power usage and less heat. We’ve seen some reference designs from Intel and other manufacturers using Intel’s new 14nm Core M and they are thin and fanless, but still pack impressive performance.

Intel announced that 14nm Core i3, i5 and i7 processors are in production and will be on the market in 2015.

If there is one feature of technology that inspires the most it’s when it helps improve quality of life. Stephen Hawking introduced an internet connected wheelchair, developed by Intel engineering interns using the low cost Intel Galileo Gen2 board. Not only does it provide constant biometric data, it also includes an application similar to navigation app Waze. Wheelchair users can map and rate accessibility of locations, allowing them to be better prepared outdoors.

The inspiring stories don’t end there. Absurdly bright 12 year old Shubham Banerjee decided that braille printers are way too expensive at more than $2000 a pop. He’s right but he also did something about it. Using Intel’s Edison chip and Lego (yes Lego) he created a braille printer for a fraction of that cost over a summer holiday. He’s now has a company called Braigo Labs and has developed version two of the printer. 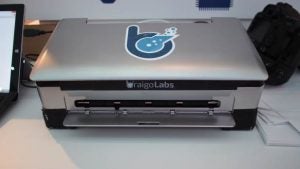 It’s not new but Intel is making a play for Android tablets in a big way. There are loads in production from a variety of manufacturers including the razor thin Dell Venue 8 7000 announced at IDF. Most interesting is that Intel’s new Atom system on chip is thin and 64-bit which means slender tablets and total compatibility with the upcoming 64-bit Android L. 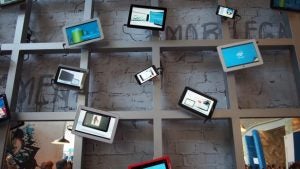 Jimmy is the social robot and he is a cutie pie. Powered by a Core i5 in its larger version and the Edison microcomputer in the smaller one, Jimmy can walk, talk and be all round adorable. Buy the little Jimmy starter kit ($1,600) and you can 3D print different shells to give Jimmy the look you want. Oh and did I mention you can get him to serve you beer? 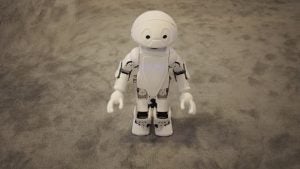 Which leads on nicely to the iKeg. Showing that practical niche business applications are also on the agenda, iKeg consists of a base that sits under a beer keg and gathers data for both the bar and the supplier. It can let staff know when a particular beer is running low so they can change barrels or order more. It also provides information back to the supplier so they know which beers are the most popular. 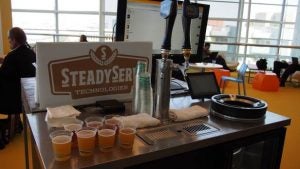 The Iris is a quad-copter drone made by 3D Robotics. At IDF 2014 they showed off the Iris , a drone that has an automatic ‘follow me’ function. Powered by Edison the Iris has facial recognition when used with a GoPro Hero 3 and can follow you around autonomously. Unfortunately it doesn’t come with collision detection yet so you’ll need to be careful where you fly it. 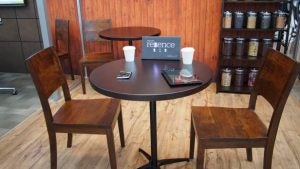 Wireless charging has been around for a while, but Intel is pushing its own form based on resonance charging. It hopes that this tech will be in homes and cafes in the next few years. Resonance charging is more flexible than the more prevalent inductive charging as it allows a greater distance between itself and the device. There was a two-inch piece of wood between the resonance coil and a laptop in the demo we saw. Not only does it charge any compatible products regardless of voltage requirements, it also acts like a docking station, sending information such as sound and images to other connected screens.

Intel has been plugging (excuse the pun) wireless charging for years but this was the most convincing demo yet and shows that it is well on its way. 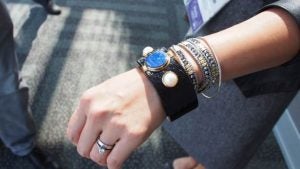 Intel thinks that other companies haven’t quite got wearables yet. It has a point, they haven’t exactly been flying off the shelves. That’s why it partnered with design label Opening Ceremony to create MICA (My Intelligent Communication Accessory).  MICA is compatible with wireless charging and comes with a curved screen at the back.

It hasn’t stopped there though. Intel also announced the Basis Peak, a smart health band and fitness tracker it claims will be much better than anything else on the market.