OPINION Joe Roberts is a VR virgin, so we shipped him off to Nvidia to try a new ‘Everest VR’ experience on the HTC Vive to get his take on the tech that will define 2016.

With the announcement that the HTC Vive will be launching in April 2016, and other VR headsets expected around the same time, the Virtual Reality revolution is almost upon us. So when Nvidia announced it would be demoing a new VR experience, I, a newcomer to the TrustedReviews team who was yet to try VR, decided to see what all the fuss was about.

I had always been apprehensive about the forthcoming virtual reality headsets. It wasn’t that they didn’t look appealing, I just worried that in our desire to ensure that the rapid advancement of tech continues, we may have rushed to bring out VR before it was working well enough.

I had this in mind when I went to sample the new Everest VR programme. The software, developed by Reykjavik-based Sólfar Studios, allows you to traverse the treacherous terrain at the top of Mount Everest. Rendered in 3D using a database of photographs, it’s aimed at demonstrating some of the non-gaming capabilities of Valve’s SteamVR platform.

I went along to London’s historic Tobacco Dock, where Nvidia, whose GeForce GTX Titan X GPU was used in the creation of the software, was demonstrating the experience.

Watch Joe Roberts shamble about in an empty room with his VR headset on:

Walking into the freezing room decorated with prayer flags and fake snow, it certainly felt a bit more Himalayan than out in the lobby. With my reservations about VR however, the extra decoration did little to boost my confidence as it seemed as though it could be more of a distraction from what might prove to be an underwhelming experience. Soon it was time to find out, as the HTC Vive was firmly strapped to my head and I was launched into the simulated mountain terrain.

The intro consisted of sweeping shots of the white slopes and foreboding icefalls. I could look around as I floated over the impressively rendered mountainscape and I have to say, there’s no way to convey the feeling of looking down at yourself and not seeing your body. It’s almost a spiritual experience to suddenly be without a body. 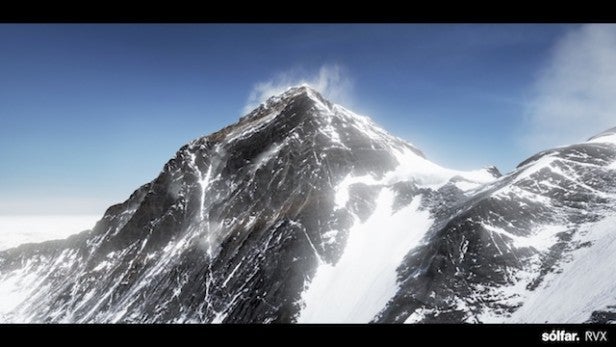 Although the graphics were seriously impressive, I must admit that the first thing that struck me as a newcomer to VR was how visible the individual pixels were. The Vive has 1,080 x 1,200 pixel-per-eye displays, or 2,160 x 1,200 overall, with refresh rates of 90fps.

This is the same as the forthcoming Oculus Rift, and higher than the Playstation VR’s 960 x 1,080 pixel-per-eye resolution. It’s conceivable that the final products may improve on the current resolutions, but it seems unlikely at this point. So just a heads-up, VR won’t look as good as your 4K TV at first.

Still, you get used to it very quickly. The HTC Vive and Valve’s SteamVR system are far too immersive to let you dwell on resolution for too long, providing as they do the perfect platform for this kind of experience. It is the only VR system which allows the user to get up and walk around within a defined space.

Unlike the Oculus Rift and Playstation VR, the HTC Vive uses ‘Lighthouse’ laser base stations placed in opposite corners of the room. These provide a 15 x 15ft tracking area, which means you can get up and walk around in the VR world. 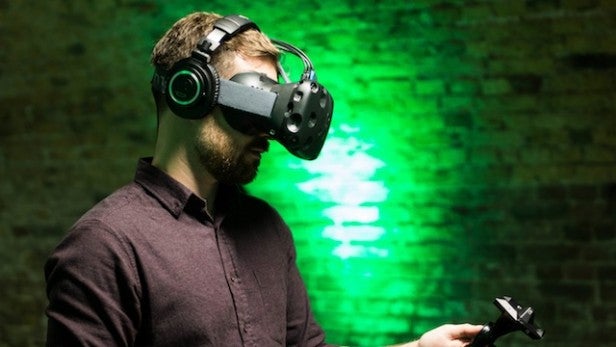 After the initial overview of your surroundings you’re put directly on the mountain-side, just below the summit, and asked to pick up two walking poles. The controllers identify where your hands are, allowing you to see them as you would in real life. I tentatively bent down to pick up the walking tools and headed off.

First I was asked to walk across a ladder placed precariously over a deep crevasse. I get mild vertigo so as the guy’s voice came over my headphones asking me to walk forward across what was sure to become my icy grave, I hesitated. Plus, I knew if I let my eyes wander downwards I’d end up looking like this guy to the Nvidia reps watching me:

Determined not to become the next inadvertent YouTube star, I sped across the gap as quickly as possible. It may have been disconcerting, but the feeling of dread inspired by the virtual drop was a testament to how realistic these VR environments feel.

Having made it across in one piece, I started to realise the potential of these headsets and the experiences they can offer. Not only could you use these scenarios to explore areas of the world you’re unlikely to ever visit, but if the environments can be rendered accurately enough, there’s no reason why the Vive and other headsets couldn’t be used in an educational capacity – taking students back to great moments in history or putting them inside an engineering project. Visual learning could take on a whole new meaning. 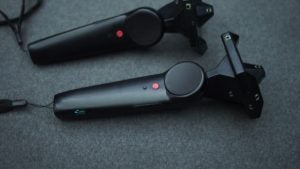 After overcoming the crevasse scenario, I was asked to scale a ladder up to the next level of Everest. Using the controllers, I reached out and grabbed on to the sides of the ladder, pulling downwards to ascend. You can see from the video that this makes you look like a berk in real life – an unavoidable hazard of VR headsets. But it was a good demonstration of how finely calibrated the controllers and tracking lasers are. The system had no issues picking up the placement of my hands and everything seemed to work fluidly.

The demo ended with another sweeping tour of the scenery. Sólfar Studios developed the experience in tandem with RVX, the Reykjavik-based visual effects and animation studio whose VFX credits include blockbusters such as ‘Gravity’ and ‘Everest’. It looks great but again, – perhaps more so because everything was white, thereby highlighting every pixel in detail.

And with that, my Everest experience was over. Did Everest VR convince me that virtual reality is going to be the next big thing? Not entirely. It was the other demos I witnessed, about which our games editor Sam Loveridge has written in our HTC Vive preview, that did that.

It wasn’t that my mountain excursion wasn’t impressive, it was simply that gaming is where the real fun is to be had. And once I’d been thrown into space battles, taken out zombies with shotguns, and drawn 3D pictures in the desert, the appeal of my amble around Everest was somewhat diminished.

My experience of Valve’s gaming demos really did bring home how immersive the HTC Vive and Steam VR can be, to the point where, after blowing the faces off two zombies at the same time with my dual wield weapons in a moment of supreme awesomeness, it struck me that in years to come we will look back and laugh at the idea of gathering around a 40-inch screen to get our entertainment fix. Why watch it when we can be in it? 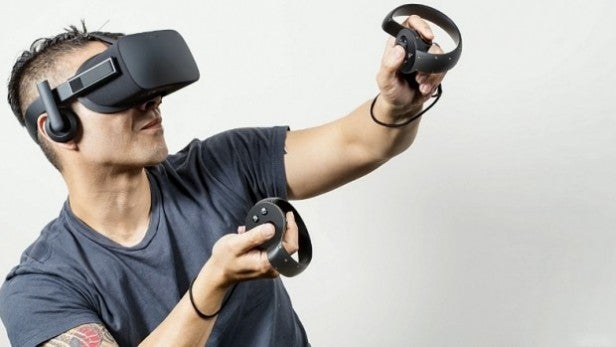 After trying VR for the first time then, I can say that it is the real deal. This isn’t some rushed version of a long-anticipated technology being hurried to the market. It really does feel just as incredible as you would imagine to inhabit the various game roles we’ve previously only been able to command with a controller and a screen. Gaming is unequivocally the best part of the VR experience.

But Everest VR was by no means a waste of time. It certainly hints at some exciting non-gaming possibilities.The programme will be made available in 2016 and Nvidia says it is working with Sólfar to integrate GameWorks VR, including VR SLI and multi-resolution shading, into the final production. That basically means that there will be a load more stuff you can do in Everest VR when it finally releases.So if it’s released along with the HTC Vive in April 2016 I definitely recommend checking it out. Just don’t look down.

Let us know your thoughts on VR in the comments below.