To customise or not to customise? That is the question. As an official “Google” phone, the Samsung Galaxy Nexus has bog-standard Ice Cream Sandwich, with no frilly extras added to the OS. The HTC One X has Ice Cream Sandwich, embroidered with HTC Sense 4.0. This is HTC’s custom user interface – and while it has caused headaches in the past, it offers a neat selection of extra bits. 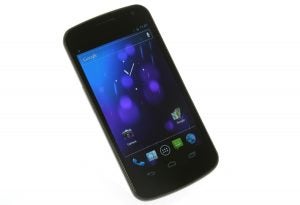 A large scoop of vanilla ICS on the Nexus

You get the iconic HTC clock widgets, neat integration of social networking and the contacts section. The lock screen has also been redesigned, letting you launch apps straight from this part of the phone. HTC Sense looks nice – but it could lead to software headaches down the road. It makes getting Android updates trickier, as HTC has to re-work Sense each time a new version of Android comes out, and can lead to more crashes. It’s a bit too early to tell whether Sense 4.0 on the HTC One X is going to be crash-happy. 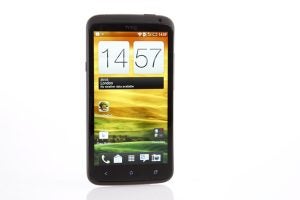 Perhaps the most important way these phones differ in how you use them is their approach to nav keys. Android Ice Cream Sandwich is all about using virtual soft keys rather than the real thing – and consequently the Galaxy Nexus’s home and menu buttons are actually part of the main touchscreen.

Not keen to play this particular ball game, HTC uses discrete touch sensitive nav keys in the One X. The benefit is that these keys don’t eat into the screen space – and yet the HTC One X is actually a little less long than the Galaxy Nexus. Nice one, HTC.

In an adept feat of spec box-ticking, the HTC One X and Samsung Galaxy Nexus have just about every type of wireless connectivity we could ask for in the UK. All we’re missing is 4G, and that wouldn’t be much use in the UK for now anyway.

All the basics are here, the most interesting being the relative newcomers to the smartphone scene – NFC and MHL. A catchy-sounding pair, eh?

NFC stands for Near Field Communication, and is what will one day – in theory – let us buy stuff with our mobile phones. Working like an Oyster card, it lets your phone communicate with a sensor over short distances. It’s not a great deal of use yet, as few places have taken to using it. But when the iPhone 5 comes out sporting an NFC chip, you can bet everyone will start taking the tech a lot more seriously… with a dozen marketing tie-ins a month.

MHL requires much less of a leap of faith. It’s a tech built into the microUSB slot of these phones that lets the data transfer socket work just like an HDMI port. It’ll output surround sound and high bit-rate 1080p video. You will need an MHL-compliant cable, and neither phone ships with one, but shop around and you’ll find one for well under £20. It’ll turn these phones into much more reliable media player boxes than a wireless streaming app would. But are they any good at playing video?

Out of the top smartphone marker, Samsung is the best as packing advanced video support into its handsets. We had hoped it would do the same for the Samsung Galaxy Nexus, but its video skills aren’t all that hot. Popular formats like MKV aren’t supported, and Divx and XviD support is also pretty ropey. Why? It’s because this is an “official” Google handset, limiting what Samsung could do to it.

It’s still a bit better than the HTC One X, though, which only officially supports the basics plugged-into Android – H.264 and WMV.

As both phones have plenty of power to-hand, third-party media players will let you play just about anything, though. 720p videos, which should look fantastic on the 720p screens of these little beauties, will pose no problem as long as you have the right media player downloaded.

Spec-wise, the HTC One X claims the clear victory here. With eight megapixels over the Samsung Galaxy Nexus’s five, it should be able to capture more detail. 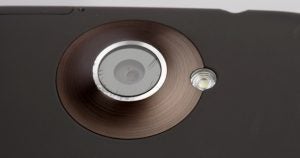 The HTC One X’s sticky-out sensor is all-too easy to scratch. Sad smiley.

The performance isn’t quite so clear cut, though. Neither is a class-leading camera – the iPhone 4S doesn’t need to worry too much. However, if you’re upgrading from an Android 2.x phone, it will seem like a big leap. Ice Cream Sandwich improves the camera software hugely, with advanced features not commonly seen in phone cameras.

The Samsung Galaxy Nexus gives you a boatload of fun active effects to apply to video clips – ones that distort people’s faces for comedy value. The results can be hi-larious. 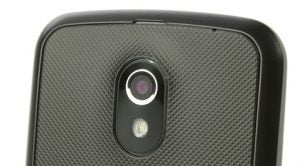 The camera of the Samsung Galaxy Nexus

The HTC One X is a bit more serious, with a burst mode called Best Shot that captures four images a second and then lets you pick the best one of the lot. It also has a built-in HDR function, which is missing from the Samsung.

Both phones have a panorama mode, which is missing from earlier versions of Android, can capture 1080p video and are backed-up by a single-LED flash.

With greater additional features and a higher megapixel count, the HTC One X wins out for photo fans.

Conclusions
Now that HTC and Samsung are so used to making top-end Android smartphones, it’s no surprise that it’s hard to pick between them. However, the HTC One X edges ahead. It’s not because the quad-core processor gives it oodles more power – it seemingly doesn’t – or because we adore the Sense UI. Its Super IPS screen looks that bit better than the Samsung Galaxy Nexus’s Super AMOLED display, it feels that bit more solid thanks to the use of a non-removable battery (which some will no-doubt hate) and HTC has packed-in more thoughtful and useful features into the camera app.

This isn’t Samsung’s only competitor for the HTC One X, though. The long-awaited Samsung Galaxy S3 may well wipe the floor with it. We’ll be back with more on that rivalry once the S3’s specs are officially outed.