The HTC One X is the first HTC-made phone to feature a quad-core processor. It’s the Tegra 3 model, seen in several Android tablets including the excellent Asus Transformer Prime.

It’s very powerful, easily capable of playing 1080p video and blasting out polygons galore. If Tegra 3 gets the same developer treatment as Tegra 2 did in 2011, a few handfuls of games will be optimised for the processor. However, for the most part it doesn’t offer that many noticeable day-to-day benefits over the dual-core chip of the HTC One S. With two cores clocked at 1.5GHz, it has more than enough grunt to take on pretty much all apps and games you could find on the Google Play app store.

The only one of the three that might be seen as limited by its processor is the single-core 1GHz One V. Navigation through the OS is swift and lag-free for the most part, but it struggles with some top-end 3D games like Dead Space and Shadowgun.

All three phones run the latest version of the Android OS – Ice Cream Sandwich or version 4.0 – and use the HTC Sense UI. This is what gives Android phones a distinct HTC flavour, packaged with a few HTC apps and a selection of HTC-made widgets. 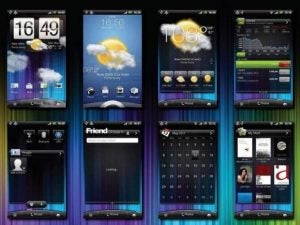 HTC Sense is now at version 4.0. Its tops features include the new lock screen, which can show you notifications and lets you head straight to a specific phone feature following unlock. There’s also Face Unlock. This recognises your face using the user-facing camera, removing the need to swipe.

Yes, it’s a total gimmick but it is kinda fun. However, this feature is missing from the HTC One V.

Like most mid-range-and-up Android phones, the HTC One mobile pack-in just about everything in terms of wireless connectivity. They have HSPA mobile internet, Wi-Fi n, Bluetooth 4.0, DLNA media streaming and MHL – which lets you pipe video through the microUSB port with the right cable.

Only the top-end HTC One X has NFC, though. This is Near Field Communication, and is a rapidly-developing tech that lets devices communicate wirelessly over short distances without any painful setup process (a la Bluetooth). The top use for it is in mobile payments – although we expect it won’t really blow up until the tech is incorporated into the iPhone series.
Physical connectivity is pretty limited in all these phones. Each has a microUSB slot and 3.5mm headphone jack – but that’s it, aside from the microSD slot of the HTC One V.

Although a top-end phone, the HTC One X camera is not quite class-leading. We’re not just talking about specs here – although the Sony Xperia S pulverises it there with 12 megapixels to the HTC One X’s eight.

The One X lens sticks out a bit, which can lead to scratching

One step down the range, the HTC One S actually uses the same megapixel count. Neither phone quite matches the performance of the iPhone 4S or Samsung Galaxy S3, though, with loss of shadow detail and struggling with low-light. Unless you want to replace a compact camera, though, all three phones are fairly capable. Their camera apps feature neat effects like HDR, mosaic and depth of field, and the autofocus is pretty good.

There’s one serious hole in the range, though. The HTC One V does not have a user-facing camera, ruling-out being able to make video calls easily, or use those delightful apps that make you fat/old/bald – or at least fatter/older/balder.

With the HTC One range, HTC has tried to cater for just about everyone – aside from those after super-budget phones. The HTC One S is a very powerful phone that could have been a reasonable flagship mobile were it not for the big daddy One X – and the HTC One V is quite simply delightful. It may be smaller and less impressive-sounding than its series stable mates, but its metal body feels great in a way many will prefer to the plastic of the One X – and let’s not forget that its screen is actually bigger than the iPhone 4S’s.

There can be no true victor here – as it’s all about what you can afford – but we will admit to falling in love with the HTC One V a bit at review.