The One range is HTC’s main Android line-up for 2012. It features the
high-end HTC One X, the slightly-less high-end HTC One S and the
mid-range HTC One V. To clear up any confusion about what you get for
the extra £250-odd from the cheapest to most expensive, we’ve broken
down all three. Specs, cameras, power and design all matter when buying a
phone, and here’s what each of the HTC bad boys offers.

The
HTC One range spreads wide across smartphone price bands. Its top-end
HTC One X competes with the iPhone 4S and Samsung Galaxy S3 at the
expensive end, while the HTC One V is affordable enough to be considered
a pay as you go option.

Want a contract? An HTC One X will set
you back at least £30 a month unless you’re willing to pay a significant
chunk of the cost up front. The HTC One S is still a high-end phone,
and will still cost you a bit unless you get yourself a £27 a month or
higher deal.

The only one of the trio available on “cheapy”
contracts is the HTC One V. Direct from the main carriers, you’re
looking at around a £20 a month outlay. However, shop around with the
smaller third-party deal providers and you can find deals around the
£15-a-month mark. The difference may not seem all that grand, but be
sure to consider how much it racks up to be over a 24-month contract.

Just
like the prices, the HTC One X is home to a trio of really quite
different designs. Each body is constructed of different materials, and
perhaps not those you might expect. The top-end HTC One X has a unibody
polycarbonate frame. An, yes, that’s a fancy way of saying it’s made of
plastic.

Unlike the Samsung Galaxy S3, the One X does not give
you access to the phone’s battery, preferring to keep it tightly under
wraps. Its sides have a spot of glossy trim, but otherwise its finish is
pure and simple-looking. Black and white versions are available.

Stepping
down the series a rung we have the HTC One S. The most unusual of the
three in build terms, it’s cased in a microarc oxidised ceramic layer
that HTC claims is four times stronger than aluminium. Impressive, eh?

There
have, however, been reports of this tough layer chipping off, leaving
your £370 phone looking a bit tatty. In April, HTC claimed it had
implemented some “small changes” in the production process to stop this
from happening. News of the chipping finish hasn’t flared-up since,
leading us to believe it has indeed been made a bit tougher. It comes in
black and blue-grey finishes.

The HTC One X follows in the
design trend of the HTC Legend and HTC Salsa, with an aluminium bod that
has a slight ergonomic lip at the bottom – first seen in the HTC Hero
way back in 2008. Unfortunately, this phone doesn’t give you battery
access

The Specs and Cameras 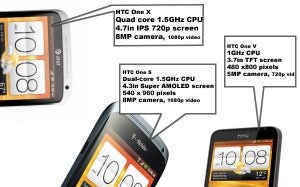 Upsetting
the hierarchy a bit, the HTC One S is the slimmest of these phones, and
by a significant margin. At 7.8mm thick, it’s one of the very thinnest
models on the market. The 8.9mm HTC One X is certainly no chunkster, but
it’s simply not thin enough to be headline-grabbing anymore.

The
HTC One V largely trades away its slim potential by using the
lipped-design, which naturally skews its figure a bit. Very large phones
also tend to be able to get slimmer than those with smaller screens,
being able to spread their internals over a wider area.

Use of
materials is also important in the weight factor. Although the HTC One X
is naturally much larger than its two brothers, it’s only 15g heavier
than the One V. We doubt whether it’d be able to stay so light if it
were to use an aluminium body.

Once
again, the One series trio sports a wide array of differences, this
time in display type. The HTC One X marks a significant upgrade over
2011’s top models, with a superb Super IPS screen, rather than a
largely-unremarkable S-LCD model.

However, what’s just as
notable is that it doesn’t use a Super AMOLED display, as seen in the
Samsung Galaxy S3 and the HTC One S. Each display type has its pros and
cons. Super IPS images tend to look a little more natural but the use of
local lighting rather than a universal backlight means AMOLEDs offer
better (and pretty much perfect) black levels.

However, OLEDs
also tend to look blue-ish when tilted and make colours look
oversaturated. The One X screen wins out in our opinion, and is also
much higher-res, with a 720p “Retina display-like” display where you
can’t pick out pixels.

Much closer to earth, the HTC One V has a
much less remarkable screen. It’s smaller, a full inch smaller than the
One X’s, and it uses less dazzling screen technology. As with so many
other aspects of the phone, though, while it’s not all that impressive
in its figures, performance is actually very good.

Storage
is the one place where the HTC One V can claim a small but definite
victory. It’s the only phone of the One trio to feature a memory card
slot. Granted, it’s in part because the internal memory’s so tiny at
just 4GB – much of which is sucked-up by pre-installed software – but
it’s something we like to see.

The HTC One S and X make you rely
on the internal memory, with 16GB and 32GB a piece. It’s enough for most
people, but becomes a drawback if you’re into watching movies on your
phone, or want to use your phone as your main music player.

Leaving
out microSD slots in top-end phones is becoming a popular trend that
would have been virtually unthinkable just a couple of years ago. Are
you bothered?