TrustedReviews sat down with Daniel Hundt, HTC’s passionate Creative Director and now Lead Designer, to ask him about the design of HTC’s latest flagship – the HTC One M9. He explains honest design, how materials affect the process and why the world isn’t yet ready for modular phones.

What’s changed on the One M9 and why?

A common question we get is: “Why does it look similar to the One M8 and M7?” It’s really important for us that we keep the lineage. We’ve built a strong brand with the One and we want to continue that strong DNA. I tell my team all the time that we need discipline – we can’t get bored of what we’re doing, we have to stay true to who we are what we feel is HTC. We have to keep what’s good and improve on what’s not working.

What we did with the M8 was shrink down the size to make it more pocketable and feel better in your hand. We made the M8 rounder than the M7 to attract more female customers, but also to make it more ergonomic. One interesting thing that we learned from making it round was that, as you use it, the texture changes, so it becomes more slippery. People said, “Hey, it’s really hard to hold, can you guys go back to something that has a little more of an edge feel?”. We ended up with something in between the M7 and M8 because that’s what people want.

How do you decide what materials to make a phone out of?

Craftsmanship is really important to us. When we talk about our products, we talk about our inspiration. We think of ourselves as makers – like shoemakers, watchmakers, instrument makers – and get inspired by attention to detail. That’s the level of perfection that we try to apply.

. We invested heavily in making a phone with a metal unibody and bringing that to life, and over the last three years we’ve been looking to improve that.

On the M7 we had a metal unibody with some plastic on the sides. We improved the design on the M8 where we had 95% metal content. As competitors started to catch up it was important that we push ourselves again and bring the metal finish, and the way we work with metal, to another level. That’s why we introduced not just the dual tone, but also the dual finish – two processes in one phone. 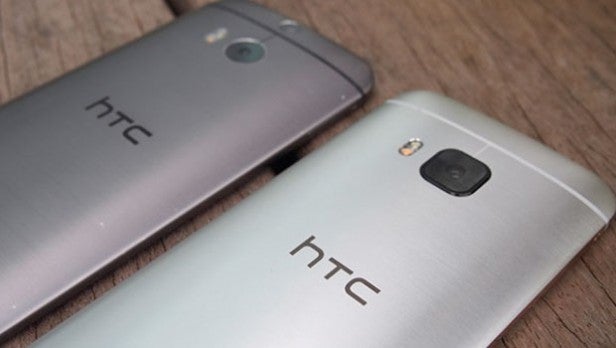 First we machine the back from one block of aluminium – 95% of the aluminium gets machined away, but of course we recycle that into new blocks. Then we anodise it and then machine it again, treat the edge and put another really fine hairline and anodise it again. It’s a pretty crazy process and one of the reasons I love working for HTC is that we’re doing those things.

We sit down with our CEO and present ideas we feel have a consumer benefit and people really love. If we present an opportunity that can make a real emotional connection with the user, then we go for it, and I really think as a company we have our heart in the right place. We think about the consumer before the bottom line.

You use metal for the One M9, but do other materials provide more design benefits?

Whenever you deal with a conductive material like metal, you have to deal with the antennas so the phone almost designs itself. There’s a beauty in that. As a designer you sort of guide the process rather than trying to shape it into what you want. You’re almost not designing it . You have to let go of control and let the material and technology do its thing, and you just make sure it stays on track. It’s a fascinating process.

Can a flagship phone made of plastic ever compete with the likes of the metal One M9?

No. You’ve seen other brands play in that space before [with phones] that were completely made out of plastic and tricked people into thinking they had a metal frame. Obviously the market has shown that you can be successful if you put enough marketing knowledge behind it, but I fundamentally believe that’s the wrong thing to do. When we use a material, we want to be honest about it. We try not to fake things; we’re totally against that.

Yes. That’s bottom-line thinking. You take the cheapest available material and then you try to make it look like something else. . When you show a person a product in a picture you’re giving them a promise, and I think you have to be true to yourself. If you tell them that you’re going to give them metal, you give them metal. If you want to give them a different material then you have to be honest about that as well. Plastic can be beautiful, it’s a matter of how you use a moulding technology to bring it to a new level, like we’ve done with the Desire Eye and Desire 820.

Do you think some manufacturers compromise battery life too much in the pursuit of thinness?

Yes, but we don’t look at what other people do and how they make trade-offs. For us it’s about finding the right balance. We study that a lot. You wouldn’t believe how many mock-ups of the HTC One M9 we have with different batteries in. We put everything on the table and think about battery life and see what effect it will have on the form factor and make those smart tradeoffs. We don’t just say “this is the battery it has to have.” We do tons of mockups and put ourselves in the role of the consumer and decide what will really benefit them.

What about modular phones then? Will they ever be as successful or be as good as a well-designed all-in-one phone?

It might be as technology advances. It’s about tradeoffs. If you have something modular you have wall thicknesses to consider. Once technology reaches a certain size why wouldn’t it be successful?

, though. I think the tradeoffs on an everyday level for a product like that, because of its size, mean it’s not justifiable yet. It’s more for novelty’s sake. It’s very interesting and it will happen, but technology has to adapt.

[Making a modular phone] is similar to choosing a material for a phone. You will have to guide the process. Technology will set the rules, the outline, and our job as designers is to create a function by which those rules are applied. It’s going to be interesting to see what happens in that space. I’m not clawing onto the fact that this [One M9] has to be in this package or sit in this form. If there’s a consumer benefit then we’ll look at it.

How are bezel-free designs and curved and flexible screens going to change the design of phones going forward?

Well, the bezel-free design we’re all driving for has a clear consumer benefit, which is size. You have maximum screen-to-form ratio and that’s something I’m really excited about.

Curved displays always take me back to the question of consumer benefit. Is it just for novelty’s sake, is it to be interesting, have something to talk about, or does it have a long-lasting benefit to the user?

At the moment where do you think curved displays sit?

I haven’t seen an application yet where it’s for true user benefit. .

What makes a design stand the test of time and can another truly iconic phone ever be made with annual refresh cycles?

I don’t see this as a limit. It’s important for us to have discipline. We felt like we had something special when we were working on the HTC One M7 three years ago, the first completely unibody phone with the strong iconic look. As a design team we felt we’d found something. .

It’s important for us to have the discipline and not react to the marketing team saying, “Hey, we need something new, we need to be the thinnest.” We want to keep what’s good and what’s recognisable for us and work on the elements that don’t work so well for us.

If you have an icon and create something good, you should hone it and refine it rather than doing something revolutionary.