HTC talks big about the camera of its new HTC One M8 phone. It uses two rear lenses and two rear sensors in order to let the phone tell between objects that are close and far away.

The main use for this feature is to create a fake ‘bokeh’ effect. Bokeh is the nature of the blurriness in backgrounds seen in photos with a shallow depth of field. Normally phones can’t successfully replicate this sort of effect – not compared with a ‘proper’ camera – as their sensors and lenses are just too small and basic.

To see whether the HTC One M8’s fake bokeh can really compete with the real deal, we took the phone and the FujiFilm X-M1 compact system camera out for a spin. We equipped the Fuji with the Fujinon 35mm f1.4 lens, which is renowned for its all-round bokeh-licious-ness. Here’s what we found.

The way to get the most marked shallow depth of field effect is to shoot with a fairly close-by subject. When the in-focus plane is quite near, the background has plenty of room to get that creamy out-of-focus look that is what the HTC One M8 camera is all about.

Unlike a true optical effect, though, the HTC One M8 is a bit limited in what it can shoot. You can’t use the uFocus bokeh mode if you’re out of the standard mode. If you use HDR, you’re out of luck. And if the phone reverts to night mode due to low-light conditions, it’s also game over for uFocus.

To work within these limitations, we first went for a classic outdoors portrait shot – with the help of a furry friend. 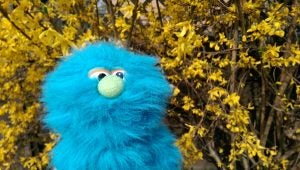 Original HTC One M8 shot
Without the Duo camera working its magic, the HTC One 8 can only produce a slight shallow depth of field effect. The flowers behind the blue monster are only a tad out of focus. But is it enough to give the subject an extra half-ounce of pop. The colour contrast helps too, though. 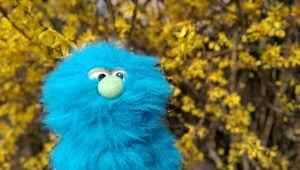 Processed HTC One M8
With the uFocus mode engaged, we see a distinct defocussing of the background. However, there are several weird inconsistencies. There’s a flower to the left of the monster’s head that has been judged by the camera’s algorithm as being in the foreground (it wasn’t), and there’s a halo of ‘crispiness’ around the subject. This is where the M8 hasn’t been able to judge the edges of the monster accurately. 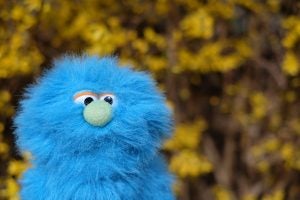 The first Fuji shot immediately shows the benefits of natural, purely optical bokeh effects. Diffraction causes the background twigs to appear expanded, not only blurred. And there are no issues separating the furry edges of the monster from the background.

For our second test we’re going to try something a little trickier. It’s a close-up of a flower with much less colour contrast than the first test, and with a less well-defined subject – a flower head is pretty small. 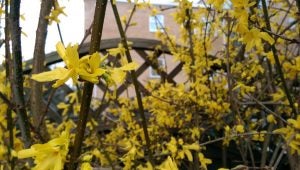 Original HTC One M8 shot
The fairly wide-angle of the HTC One M8 lens and (like most phones) limited close-up focusing abilities make it tricky to get good macro-style photos with the M8. The natural depth of field properties of the f/2.0 lens are not really enough to make the yellow flower stand out in this shot. 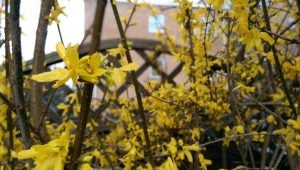 Processed HTC One M8
The HTC One M8’s handling of this shot is quite bizarre. Note how the uFocus mode has de-focused the stem above the ‘main’ yellow flower even while it is in practical terms at the same depth as the flower and the stem below it. There is a marginal increase in the blurring effect of the far background, but it doesn’t really compensate enough for the ways uFocus has essentially broken this shot. 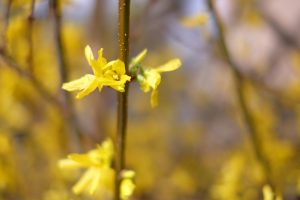 As with the processed HTC shot, we see some of the flower stem going out of focus, but here it’s consistent with the depth of field and the object’s position in the field. Fake bokeh simply can’t reliably create truly narrow depth of field effects without making the wrong decisions – even with a second lens, apparently.

Here we’re going to see how well the HTC One M8 can separate subjects when they’re not all that far apart, in terms of depth. Once again we’re calling on a few furry friends. We’ve lined up four in a row and are going to try and focus on each consecutively to see how the HTC One M8 deals with the task.

It’s here that we come up against another limitation of the camera, though. uFocus can only de-focus items, not re-focus them. So to help out, the HTC One M8’s photos here are made using two ‘source’ shots – one focused on the nearest toy, the other on the furthest. 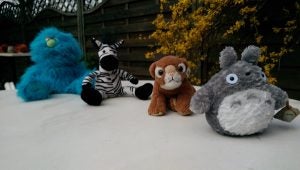 HTC One M8 on Totoro (nearest) 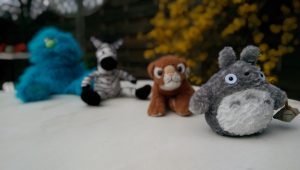 This is perhaps the most successful HTC One M8 shot yet. Aside from some errant in-focus bits just to the right of the subject, the other toys are clearly blown out of focus. There is also some gradation in the effect — the toys at the back are more strongly affected than the tiger cub next to the subject. This would definitely do for Instagram (‘likes’ not guaranteed, mind). 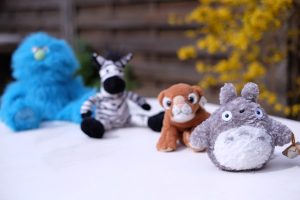 Look closely between this photo and its HTC alternative and you’ll see the subtle difference between being ‘out of focus’ and the simpler blurring effect used by the HTC One M8’s uFocus mode.

HTC One M8 on tiger 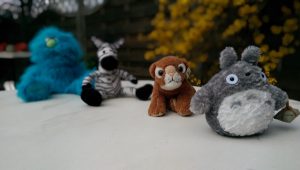 This second separation test if less successful. The tiger has been brought into focus, but it hasn’t been separated from the front Totoro toy. This seems odd when the two were successfully separated in the last photo. HTC’s blurring algorithm is not very consistent. Also note the in-focus (ish) flowers just to the right of the subject. 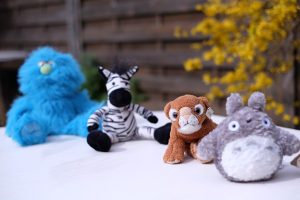 Here the Fuji has done what the HTC could not – bring the tiger into focus while blurring out the nearby Totoro toy, our first subject. It’s tests like this (and the flower test) that show that while hardware is involved, the HTC One M8 still relies hugely on software.

HTC One M8 on zebra 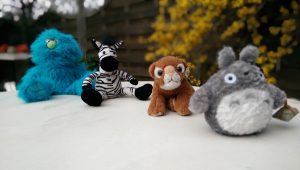 Selecting the zebra has brought it into focus and taken the front toy out of focus. But the Tiger is still pretty sharp, as is the back toy. Oh well. 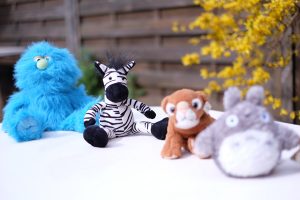 FujiFilm X-M1 on zebra
Here the depth of field is enough to keep the rear blue monster largely sharp, but the Totoro toy and tiger are clearly blurred out, letting the zebra become the clear focal point of the shot.

HTC One M8 on blue monster 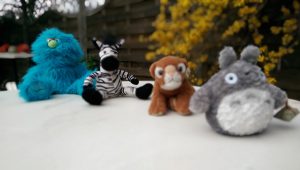 This photo is an interesting one. The front two toys have been successfully blurred-out, and there’s a difference in blur between those toys and the flowers behind them. It’s more evidence that uFocus doesn’t apply a single-level blur to its photos. However, there are some weird aberrations again.

Part of the zebra is out of focus, but there are still in-focus parts on its arms. This may be the patterning of the stripes confusing the uFocus algorithm, Hopefully, HTC will be able fix these sorts of issues with a software update. 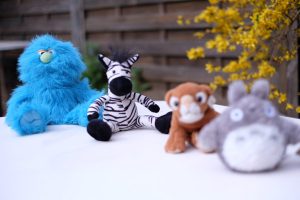 As with the zebra shot, there’s not a hugely marked difference in focus between the zebra and monster. But it is ‘correct’ optically.

Test 4: Messing with the Foreground

For our final test we’re looking at how the HTC One M8 is at blurring out the foreground when it interferes with the background – which is in this case where the photo will be focused. This is probably the M8’s trickiest challenge yet. Unfortunately, the actual scene has to be a little different between the two cameras because of their different focal lengths. Let’s have a look. 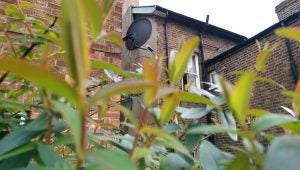 The HTC One M8 actually produces enough of a ‘bokeh’ effect to get the effect we’re after here. The difference in field positions is so great that you can get pretty good effects without any processing. Granted, it’s not the most interesting of scenes. Pretend it’s a giant wasp instead of a Sky dish, or something. 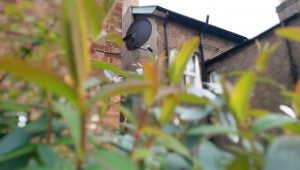 On first glance, this shot might appear to be successful. However, it’s deeply problematic and doesn’t stand up to any closer scrutiny. There’s really no separation between the leaves and the wall directly behind it, and there’s actually little depth-related focusing nearby the dish. Also note the inexplicably in-focus row of bricks by the roof to the right of the photo.

This shot would actually be better off with the sort of zone focusing you get with one of Nokia’s Lumia phones. 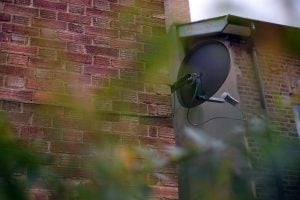 It’s another easy success for the Fuji. No surprise there. However, this shot also exposes another bokeh feature the HTC One M8 is incapable of creating. The extreme blurring of the leaves has actually caused some of them to become translucent in this shot. To call bokeh effects blurring is really an oversimplification – it’s all about how light is diffracted through a lens. And that’s not easy to fake.

Verdict: Is the HTC One M8 uFocus feature any good?

These tests have proved, sadly, that in a lot of conditions the HTC One M8’s uFocus Duo camera feature is not much use. It often spoils what would be a decent shot using the ‘natural bokeh’ of the phone’s lens, and its algorithm needs work.

However, for simple portraits it can be a great extra, making people’s faces pop more than they otherwise would. You need to manage your expectations and learn how to use it, but it is worthwhile. We just wish it was a bit better.

Next, read our guide to Android 4.4 tips, tricks and secrets