One of the phones we’re likely to see announced at the MWC 2014 tech show in February – or around that time – is the HTC One 2, also known as the “M8”. It’ll be HTC’s lead Android phone for the year, and is likely its one chance at competing with the Samsung Galaxy S5.

HTC has not yet revealed a single thing about the next HTC One, but leaks and reports from people who claim to be in the know mean we already know a bunch of features the HTC One 2 is likely to have.

Leaked parts that appear to be components of the HTC One 2 suggest it will look and feel a lot like the HTC One. That means a mostly aluminium body with white plastic accents – in the initial silver version at least.

Unlike the HTC One Max, it doesn’t look like the phone will have a removable back. That means no access to the battery and – possibly – no microSD memory card slot. However, having used both the HTC One and HTC One Max for a good while, we’d happily take the hit for a phone that feels more-or-less like the original HTC One. It feels and looks more expensive, better-made, than the HTC One Mini or One Max.

We also expect to see a larger screen crammed into a similar-size body as the first HTC One. As with other phones like the LG G2, this will be achieved by reducing the amount of screen bezel – the space between the end of the display and the very edge of the phone. This should not be too hard to do, as the HTC One has a fairly chunky bezel.

The first HTC One had a screen of 4.7 inches – it was already a little small for a top-end phone. In the next model, we think HTC is likely to use a 5-inch to 5.2-inch screen because the flagship trend is still for bigger screens. We wouldn’t be surprised if HTC stays a little smaller than the competition from Sony and Samsung, but there’s little chance it’ll stick at 4.7 inches.

The one other big hardware rumour about the HTC One 2 is that it will not have hardware soft keys – used to provide the ‘back’ and ‘home’ buttons in an Android phone. There are two of these on the original HTC One, separated by the HTC logo below the screen.

If this turns out to be true, the HTC One 2 will use software buttons for the same purpose. This is nothing new – the Nexus 5 and LG G2 both reject dedicated soft keys in favour of the software kind.

This is a smart move if HTC wants to make the front of the HTC One 2 as display-filled as it can. 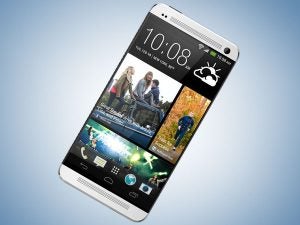 Leaked hardware components of the HTC One 2 suggest it will have two cut-outs on the back. At first people believed this might be for two separate camera sensor/lens arrays, but the second spot is now thought to be for a fingerprint sensor.

The HTC One does not have a fingerprint sensor. But its brother, the HTC One Max, does so this is one rumour that makes a lot of sense.

However, it’s not one that fills us with confidence about the HTC One 2. We found the One Max’s fingerprint sensor difficult to use and unreliable. It’s nowhere near as intuitive as the sensor on the iPhone 5S.

We shouldn’t dismiss it this early, though. HTC may have recognised the shortcomings in the HTC One Max’s fingerprint sensor and solved them – either with new hardware or more clever software.

In the HTC One Max, the problem arises from having to slide a finger down the centre of the back of the phone, over a recessed square where the sensor lives. You can’t do so particularly casually as you need to get the right part of your finger on the right part of the sensor. 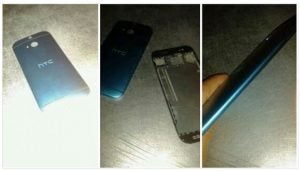 A flash next to a fingerprint sensor? We have doubts about some of these leaks

Many of the year’s most important phones are revealed each February, at a technology show called Mobile World Congress. And even if they’re not directly shown-off at the show, others are launched in separate events around that time.

It is strongly believed that HTC will announce the HTC One 2 at – or around – MWC 2014. This would mean the phone arrives almost exactly a year after its predecessor.

There has been plenty of speculation about the HTC One 2’s specs, but it revolves mostly around the idea that there are only a few current components to pick from – unless HTC has really lost the plot.

Every HTC One series phone has used a Qualcomm Snapdragon-series CPU, and it seems likely that the HTC One 2 will do the same. It won’t be hard to out-do the first HTC One, either.

The HTC One uses the Snapdragon 600 CPU, which was surpassed fairly swiftly after the phone’s release by the Snapdragon 800 chipset. It seems highly unlikely the new phone will use anything less capable than this CPU.

The Snapdragon 805 offers a claimed 40 per cent increase in graphics power, and new central processor cores that are a bit more efficient, and can be clocked higher, than the Snapdragon 800’s. It seems to be the GPU that has been given the big upgrade this time around.

RAM is also expected to be increased from 2GB to 3GB in the move from HTC One to One 2.

What we don’t know

These leaks suggest HTC isn’t going to radically mess with the winning formula it established with the HTC one back in February 2013. But there are still some crucial things we don’t yet know.

One of the most shouted-about elements of the HTC One was its UltraPixel camera. Its aim was to increase all-round photo performance by decreasing the number of megapixels.

This sounds counterintuitive, but it does make some sense. By packing fewer pixels into a camera sensor, those pixels can each be larger. Larger pixels mean each pixel is able to retrieve more light, resulting in in more accurate photos.

However, the trade-off in the first-generation HTC One was huge. Dynamic range in photos was solid, but detail was rubbish compared with rivals like the Samsung Galaxy S4. Really rubbish.

We don’t yet know what HTC has planned for the HTC One 2 camera. There was some suggestion that it would have two camera sensors – an UltraPixel one for low-light conditions and a normal sensor for better lighting. However, this rumour has been largely quashed in favour of the idea that the phone will have a fingerprint sensor instead.

What would we like to see? An 8-megapixel UltraPixel camera could be a real winner. (Relatively) Large sensor pixels and respectable resolution should result in a great mobile phone camera. However, it would mean that the camera sensor would have to be much, much larger than the HTC One’s 1/3-inch sensor.

There’s also significant confusion about the name. For simplicity’s sake we’ve been calling the new HTC phone the HTC One 2. It’s hardly the easiest name for newcomers to work their brain around, but seems one of the most likely candidates.

The phone is also commonly referred to as the HTC M8. It’s the phone’s codename – perhaps what they call it over in HTC’s labs. However, the HTC One’s codename was the M7, and that phone is never, ever referred to with that title at this point.

Some believe the HTC One 2 will simply be referred to as the ‘HTC One’, in the manner of Apple’s MacBook laptops. However, we think HTC needs a way to separate the new phone from the old. Perhaps, a bit like the iPad mini with Retina display, the ‘HTC One with slightly rubbish fingerprint sensor’ will be just the ticket.

Next, read our Galaxy S5 vs Galaxy S4 comparison