Pac-Man, the Samsung Galaxy S6 Edge and the odd teddy bear or two have all been sent into space recently. Not by the boffins at NASA, but average Joes with a GPS unit, a weather balloon and enough helium to make Barry White sound like Orvil the Duck.

This got me thinking, can it really be that simple to take the ultimate Instagram snap? This is space we’re talking about, after all. Well, amazingly, it is. It turns out that the final frontier stopped being just that a long time ago – people just forgot to shout about it.

Now, anyone with the desire can send something up into the edge of space for around £200. What’s more, thanks to increasingly compact action cams, we can capture footage of the trip, with the curvature of the earth and the glow of our planet’s atmosphere as a backdrop.

“It’s quite straightforward really,” Chris Rose, co-founder and director of space-snaps experts Sent into Space told us. “This really is something that anyone can do. Your eight-year-old son might struggle a little bit, but the premise of the project and the execution of it is really pretty simple.”

SEE ALSO: The best games you never knew were made in the UK 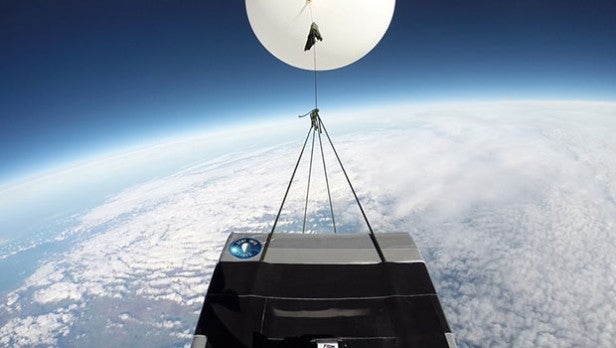 What you’ll need
Firstly, get those notions of rockets and jet-fuelled propulsion systems out of your head. What you’ll need to get your space snap is something with far more finesse and fewer explosions: a balloon. Not just any old balloon, though – that spare ‘Happy 21st’ inflatable you’ve got is no use here; you’ll need a specialist meteorological balloon.

These high-capacity ruggedised units have the capability to lift your payload to heights anywhere up to 39km. That’s almost four times higher than the cruising altitude of your average transatlantic flight. Filled with helium, these lift your luggage to the edge of space at an average rate of 5 metres per second (around 11mph).

Attached to this is a payload box – think a polystyrene shoebox that will hold all of the necessary electronics. If you so desired you could simply send up a balloon and box and be done with it, but that doesn’t make for the Instagram snaps to end all Instagram snaps. It also wouldn’t be very easy to find. 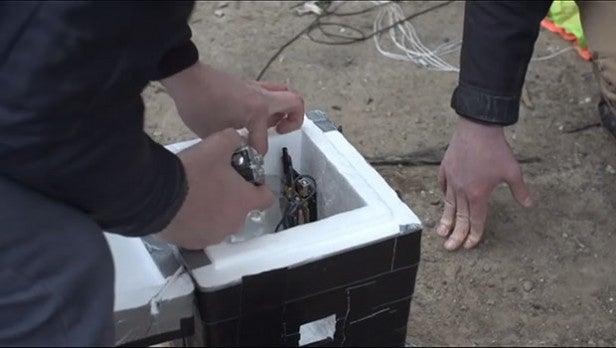 You’re also going to want something that lets you keep an eye on your payload. Rose suggests bunging a GPS tracker – or preferably two – into the box alongside your camera to make the thing a little easier to find when it’s returning to terra firma.

“Tracking systems are a must,” he told us. “We have cellular-based trackers that give you a fix when it has landed on the ground. You ring it up and it gives you an active position – that’s the simplest way. You can also get live telemetry systems that will tell you exactly where the system is at any point throughout the flight.”

Explaining the need for a back-up system, he added: “, you’re going to struggle to get a message back from it. We provide two tracking systems and you can put these on different networks, so if this happens, you’re covered.”

Simply chucking a camera and GPS unit into a box isn’t going to cut it, though. It gets pretty chilly in near space; too chilly for your tech’s battery to survive. The answer is nice and simple – a hearty amount of foam padding and insulation.

On the outside, if you want a picture of something in space, you’re going to need a small bit of framework – think a fancy selfie stick – attached to the payload box which can hold your desired goods in shot. You might also want an “If found, please call…” note on the outside too, just in case.

Finally, of course, you’re going to want to bung a parachute in there. When that helium balloon goes pop 30km up, you need something with at least a 5.5ft span to bring everything back down nice and safely. 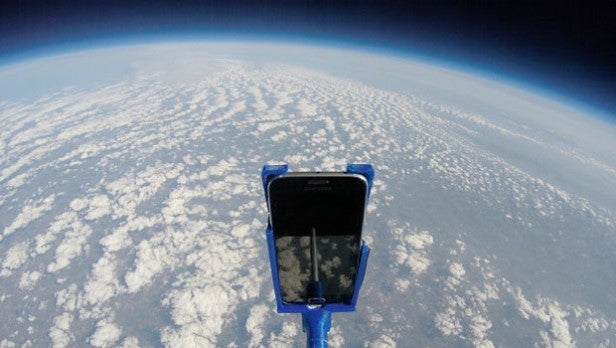 What you need to know
While the mission might be as simple as pumping a good tank’s worth of helium into a balloon and letting it go, the success of the trip can lie in the prep. If you’re looking to snap something special, with a bit of video thrills thrown in, Rose has suggested a GoPro and a bit of tinkering will do the trick.

“We use GoPros and we program them – which anyone can do quite easily – to take HD video and periodic stills which are higher quality throughout the flight,” he explained. “You can program this to do stills ever 5 seconds, every 10 seconds, whatever you like really.

“When you get this back, you’ve got your whole flight footage, but you’ve also got these really high-quality stills all the way through the flight that you can blow up to massive sizes.”

As part of your space-flight prep, you’ll also need to make sure you’ve got permission. Not from your mum, but the Civil Aviation Authority. This, again, is surprisingly easy – and free.

“There are a few restrictions about launching these balloons and it is something that everyone should take seriously,” Rose warned. “You apply for a NOTA, which is a notice to airment. This is basically an exemption from unmanned flights. It sounds very complicated, but it’s not. It is a formality really.

“You usually have to give a month’s notice and you apply for a few days. Within those few days, we’ve got permission to launch in that location.”

This deployment timeframe is key, as the weather plays a big part in how successful your flight will be. 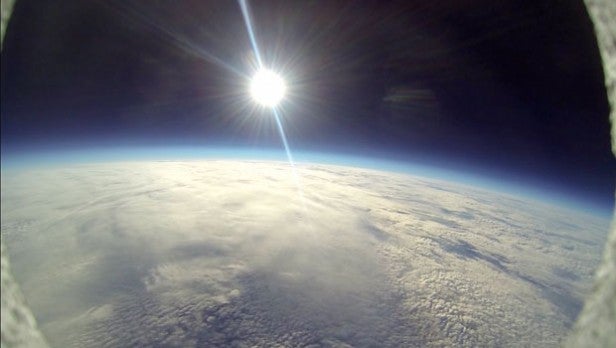 How easy is it?
According to Rose: “You’ve only got to look at the equipment needed to know that it’s not too daunting. It’s more about the execution of it and knowing what to do.”

Unfortunately, these balloons don’t just do up and down; wind plays a massive role in where your payload ends up, so you might have a bit of time to kill and quite a drive ahead in order to retrieve your package.

“In total you’re going to be looking at about 2.5 hours for your balloon to go up, and 35 minutes to come down,” he explained. “It is very weather dependant where your payload will come back down, but the British weather system is quite predictable.

“. The weather can be very still down low for the filling process, but the higher winds can be quite aggressive. Further to that, the winds can be in different directions at different levels, so we’ve had flights travel over 100 miles but still land just a couple of miles down the road.”

The answer? Map your flight before you do it. SentIntoSpace offers free flight simulation software on their website. This lets you input your start location and time, target altitude and ascent rate, and – based on the latest weather forecasts – will predict when your payload should descend. It makes avoiding a sea-landing a bit easier. 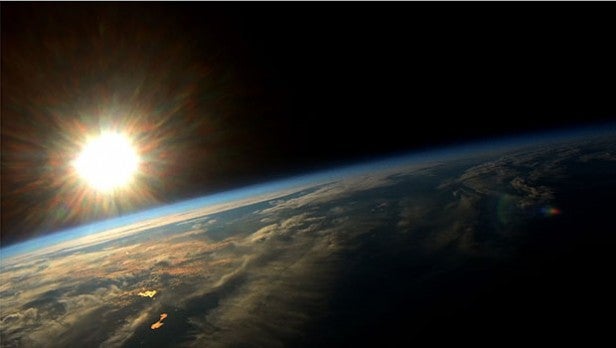 How much will it cost?
Sending something into space isn’t exactly cheap. Neither, though, will it break the bank. Sent into Space offers starter kits that contain many of the essentials required for a mission (balloon, parachute, payload container) for as little £135. Yes, you’ll need to add helium costs and an old camera to this, but that’s still relatively affordable. Adding GPS to the kit bumps the fees a little further, but this is still low cost for space.

What’s more, apart from the balloon (and the helium used to fill it), all of the equipment needed for these trainee space trips can be used again. And again and again. Assuming you’ve safely insulated your camera and its delicate batteries against the cold of space, the snapper should still work once its descended back to earth. Same with the SD card and GPS tracker.

“We would love for all of the kit to be reusable, but the way that this works is that the balloon bursts at the peak of the flight, so the balloon itself isn’t reusable,” Rose explained.

He added: “Everything else is, as the parachute will bring everything nice and safely down to earth. The GPS systems, the black box, everything else is reusable. You can just grab another balloon, fill it with helium and go again.” 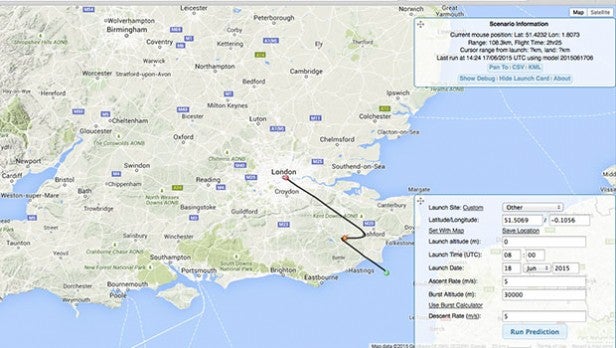 What are the risks?
Now, our lawyers have warned us to state that if you’re of an idiotic or moronic nature, don’t try this at home. Get a responsible adult to supervise your flight efforts and only inhale funny, not life-threatening levels of helium.

“You’ve always got to bear in mind when you do this sort of project that there is an element of risk,” Rose warned. “We can take steps to minimise this sort of risk, but you are submitting this equipment to very adverse conditions, so things can go wrong.”

From corrupt storage cards and drained camera batteries to more simple concerns like high winds, there is much that can scupper your space flight. “You have to think about health and safety, you don’t want this to be coming down in the centre of London for instance,” he said.

That’s it really. It might not be as exciting as years of sci-fi films and futurescape cartoons would have had is believe, but getting to space – at least in some small way – is now a damn lot more accessible.