Whether it’s your Nikon camera or ramping up the storage for a Raspberry Pi, here’s our handy guide on how to pick out the perfect SD card

Most of us, if not all, will have an SD card inserted in our phones, tablets, cameras, action cams, audio players, Raspberry Pi and pretty much any other equipment where gigabytes of storage are required. But do we have the right SD card for the kit?

It’s one thing to make sure that there’s enough capacity for our needs, however, how often do most users take time to consider the Speed Class of the card, or the manufacturer of the card? What about other features, such as WiFi support? It’s an interesting topic, as it’s one that’s never really discussed. After all, we buy the equipment followed by a sizeable SD card, and away we go.

That being the case, we thought we’d have a little delve into different types of SD cards, to see if we actually are using the right card for the right job. 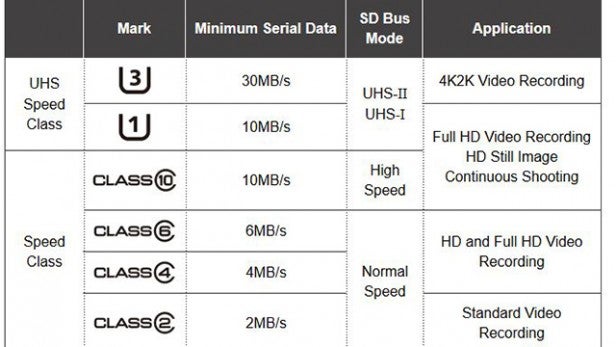 How often have you stopped and actually looked at the many wonderful, and often cryptic symbols on the face of an SD card? The enthusiasts will undoubtedly have, but what about the average consumer?

The majority of the time it’s the large 16GB, 32GB and other high capacities that draw the eye, but if you look a little closer you’ll notice one of two different symbols. One will be a number, ranging from 2, 4, 6 and 10 inside a broken circle – or a large ‘C’ if you prefer. The other will be either a 1 or a 3 inside a wide ‘U’. What these are referring to is the Speed Class, in other words the minimum writing performance to ensure smooth writing of video. The Speed Classes are defined by SD Association as Class 2, 4, 6 and 10 – hence the ‘C’ with the number inside. What this translates to is:

Classes 2 through to 6 are the normal speed cards, whereas class 10 is the high speed mode. The other Speed Classes, the numbers within the ‘U’, refer to UHS, or Ultra High Speed. What these translated mean, is:

However, despite those rather impressive numbers the rate at which a card will write data depends on a few other details.

The SD bus speed of the equipment will affect the overall performance of the card. For example, if you insert a Class 10 SD card in to an old digital camera, if it fits obviously, then there’s a good chance the device won’t be able to write at the stated 10MB/s due to the age of the technology inside the camera.

Just as in networking and building a PC, the components will only operate at the fastest speed of the slowest element. A modern camera though, will most likely be able to take the best UHS 3 cards and communicate with them at the maximum bandwidth.

The trick of course is to buy the card Class that’s right for you. There’s no point going for the best UHS 3 card if you only plan on taking a few selfies and holiday snaps. If you’re planning on using a thousand pound DSLR, and you’ve been hired to shoot a friend’s wedding then yes, get a UHS 3 card, as you’ll probably need to shoot some high speed pictures, videos and so on.

Storage is usually the most common factor that consumers go for when viewing a range of SD cards. Most of the time, and we’re all guilty of it, we just opt for the highest possible and affordable capacity. After all, space is cheap these days.

Generally, the most popular SD cards sold range from 4GB up to 64GB, but can go much further up to 2TB – although by the time we write this it’ll probably increase to three or four terabytes, such is the world of technology.

Based on cards up to 64GB then, used with a 12-megapixel phone or camera, we can expect (roughly speaking with an individual file size of 3.4MB per image) the following:

If it’s video you’re shooting, then a HD 1080p video at the same capacities will offer:

These are numbers we’ve quoted from Lexar.com to make it a little easier to visualise, so it’s not just our wild guesses; if you have a problem with them, take it up with Lexar.

As you can expect, the higher the megapixels or definition of the video being recorded, the more megabytes will be used. 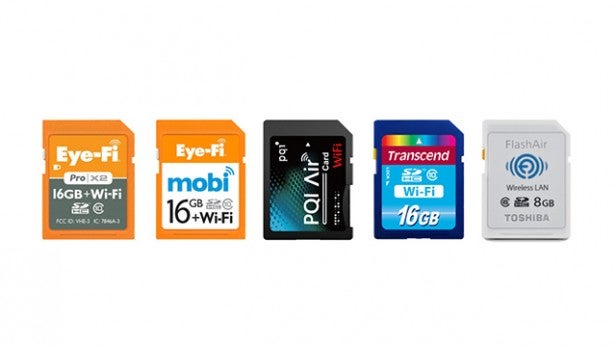 WiFi supported SD cards have been around for a while now, and are popular with many consumers and professionals alike.

The obvious benefit here is that you’re able to connect to a phone or a cloud service with a device that’s non-WiFi enabled. Thus you can improve your workflow by uploading your images remotely while on the go without the need for cables, a separate computer, or without having to swap out SD cards when one gets full; you’ll just connect via your phone or tablet.

However, while that sounds like a perfect world solution there are a couple of issues you need to consider before taking the plunge and buying a WiFi enabled SD card.

The range of the connection needs to be taken into consideration. For example, while in the middle of London you’ll no doubt have a 4G+ connection and an unlimited supply of WiFi connections to hook up to. Whereas that aforementioned wedding, which is now being conducted on a mountain in the middle of Cumbria, may not have quite the same signal – if any at all. Which means you’ll either need a big capacity, or lots of SD cards on hand to swap out.

Another consideration is battery life of the device in which the WiFi card is inserted. As well as having to drive the device, the battery is also now having the extra load of fuelling a WiFi card and the transmission of data. We don’t have any exact figures as to how much of an exact toll a WiFi card takes on a battery, but common sense dictates that it’s going to be more than usual. 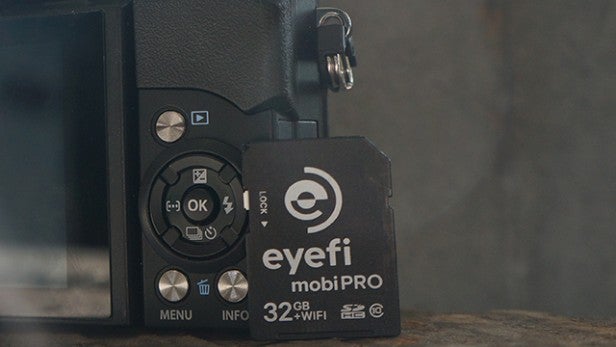 SD cards to look out for

SD cards flood the pages of eBay on a regular basis, with prices that are significantly cheaper than the high street electrical store and pretty hard to resist. But are they any good?

It’s a difficult one to answer. On the one hand, many of you will have bought and used an unbranded SD card from the likes of eBay and had many years of unproblematic service from it.

On the other hand, there are some who have had nothing but trouble from an unbranded SD card, and consider them as not worth the plastic they’re coated in.

It’s a personal thing based on your experiences, and as such it can be a bit of a gamble. In the end, it comes down to whether you’ll trust an unbranded model over a named card, and if you don’t mind that the card may (or may not) go pop mid-use. Taking into consideration the imaginary wedding we’re shooting, is it worth being hunted down by the bride and groom for losing their wedding pictures?

Also consider the device that the card will be inserted in to. If it’s the tablet that sits next to your arm chair and is used only for Facebook, a bit of gaming and checking IMDB when you recognise an actor on TV, then you could get away with the gamble and go for an unbranded card.

And again, if the device in question is your main phone, where you’ll store all your contacts, images and other content, you may want to opt for a named brand card, for that extra piece of mind. Likewise for an expensive DLSR when your taking important pictures of a day out.

On a separate note, it’s worth mentioning that even named brand cards can fail from time to time, just probably not as much as an unnamed card. That said, here are a few examples that we’ve used in the past and found to be of excellent quality and reliability.

Kingston 64GB UHS 3 (£25) –  As above, another speedy card with plenty of storage capacity for those 4K2K videos and HD images, as well as fast access to stored apps.

Eyefi 8GB Class 10 WiFi (£27) – If you’re after a WiFi supported card, then this example from Eyefi is considered to be one of the best around.

Transcend 32GB Class 10 WiFi (£38) Another worthy example of a WiFi supported SD card that’s fast and with plenty of storage.

Have any more questions about buying an SD card? Let us know in the comments section below