Think you’re safe on Whisper? We take a closer look at how anonymous apps actually work and what they really hide.

If you’re over the age of eighteen, you probably have little interest in anonymous apps and have no concept of their appeal. They’ve risen dramatically in popularity over the past year or so, preying on our human nature to nose into everyone’s thoughts and read the minds of complete strangers. Either that, or they target our lonely self-doubting side that just wants to find someone else who agrees that National Treasure: Book of Secrets is the best Nicholas Cage film (please, it’s obviously Face/Off).

Anonymous apps have come under fire for not delivering on their promise of providing a space where anyone can say anything without consequences, but is this something we really need on our smartphones? Alongside the banking, dating, travel, photography and games, is there really room for an app which gives you licence to think what you want? More importantly, is this really something we need? Let’s delve deeper into anonymous apps, what they are and, most importantly, why they are.

Related: Six things to try first on the iPhone 6S 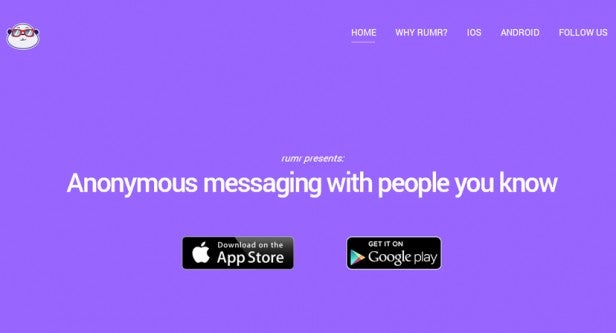 The general template of an anonymous app is a stream of posts from users, sharing simple or not-so-simple statements, with absolutely no information about the person who posted them. They range from the banal, ‘Why fall in love when you can fall asleep’, to the philosophical ‘what if tattoos just randomly appeared on our skin at key points in our live and we had to figure out what they meant for ourselves’, to plain oversharing: ‘time for another diaper change for my beautiful smelly daughter’. Nice.

You don’t enter a username, you don’t even link the app to your Facebook – rare for an app these days – you just download, agree to the app using your location, and off you go. Names like Whisper, Shush and Thoughts Around Me lure you in with their promise of juicy confessions from people you’ve never met and wouldn’t recognise if ran into them outside the corner shop. They appeal to our morbid and frankly nosy curiosity of what complete strangers are thinking and doing, similar to a glossy magazine or reality TV show but with a fraction of the time commitment, effort and cost.

While anonymity is nothing new in the dark depths of the internet, the combination of a simple user interface, a scrollable stream of posts in the palm of your hand, and the alluring promise of secrecy has made apps such as Whisper and Shush an international hit. Some apps, predominately Whisper, encourage you to contribute as well as consume, by sticking a huge purple plus sign in the middle of the app for you to post your own ‘confessions’, like a big red launch button for your feelings. No wonder that almost half of Whisper users post something every day. If that sounds like a lot, think about how much you would post if you shared every unexpressed thought you had every day. Yeah, that much. 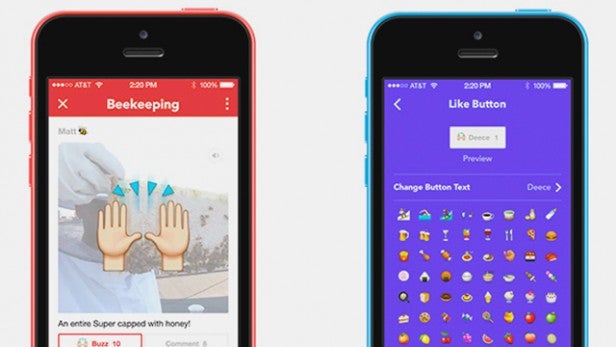 Facebook recently introduced Room, an app where you can conduct group chats anonymously

A quick scan of the leading anonymous apps – Whisper, Shush, Thoughts Around Me (TAM) and Yik Yak – shows a worryingly high percentage of young people moaning about school, dating pressures and troubles with friends. Whisper even has a ‘school’ tab for kids to find out what their classmates are thinking without knowing who’s saying it.

Juxtaposed next to this harmless teenage fun are creepier comments like ‘girls in school uniforms blow my mind’ and ‘any young girls want to talk?’ While some apps ask you to agree to a set of conditions before opening up, nowhere does it say that harmful comments will be policed and users evicted. The most worrying aspect of the app is that you have no idea who your comments are reaching and what they’re doing with them.

Not even the developers know: Kassem Younis, co-founder of TAM, says they estimate their average user is aged 18-35, and their gender balance is pretty even…and that’s all a big guess. Other apps can geotag your location, but knowing where someone is when they post something usually tells you very little about who they are. 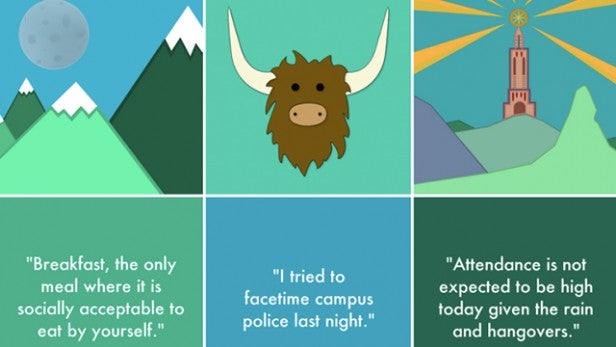 These apps provide a ‘safe haven’ where you can say whatever you like. You get to lift a weight off your shoulders with no consequences, there’s no guilt that can follow burdening someone else with your worries, and in some cases the network of users can provide reassurance and validation.

For many, they can be a secret escape to unleash your innermost thoughts, or just say something silly you know would go down like a lead balloon in front of friends. Sure, you can understand the appeal of letting loose occasionally and venting on an app where whatever you say can’t be traced back to you.

Younis argues social media has turned into “modern digital PR”, a kind of self-promotion which, when considering how much time you spend thinking about how to phrase your latest tweet, is a pretty good observation. “Giving people a free platform where they can talk about whatever is on their mind in an environment free of any social barriers or ‘social graph’ is a very liberating experience.” Younis claims the disconnection between our ‘official’ online personas on Facebook and Twitter and our real selves is exposed on apps like TAM.

However the fact that you can say anything is the main issue with these apps: the amount of bullying and insulting comments on anonymous apps has been well-documented, and it follows the same principles as cyber-bullying, but there’s not even a Twitter username to track who’s dishing out nasty comments. Younis states that their moderation team is all in-house and uses “multiple escalation procedures” and “constant monitoring and feedback” to eradicate bullying from Thoughts Around Me. Given that some posts on the app receive well over a thousand comments, moderating every single comment is practically impossible.

Private messaging features on some apps encourage like-minded users to chat, but you know even less about someone else on this app than any other kind of app. Some users go in for the kill and ask for Facebook or Instagram details straight away, and they’re given out in the public message thread. Yik Yak even encourages you to earn Yakarma points by posting, interacting and inviting friends to the app. You know, just in case Candy Crush points aren’t enough.

Related: 9 gadgets that could save your life 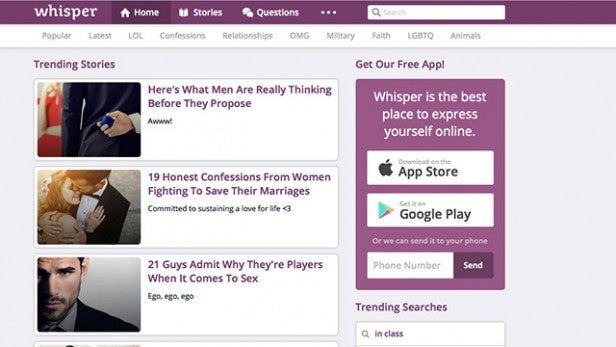 Your parents told you never to judge a book by its cover, and that’s true of these so-called ‘anonymous’ apps too. The thing is, they’re not guaranteed to be anonymous at all. Whisper suffered an embarrassing episode last year when a Guardian investigation showed they were working with the US Department of Defence and were able to track posts to within 500 metres of where they were posted. Since the app has proven popular with military personnel, this makes for a very worrying statistic for some users.

Sub-sections of these apps, such as the ‘schools’ tab on Whisper, aren’t that anonymous to begin with, so finding out who’s posting what can only take a bit of detective work in some areas. I logged into the thread of my alma mater and found odd posts about slugs, sex swings, and amusing replies to them all. What’s more, every single post was tagged with how long ago and where it was posted. I’m no Inspector Gadget, but were I still at school, I could make some pretty good guesses.

Stating the obvious, everything you post and view on a smartphone can be screengrabbed, as evidenced by the images in this post. Nothing is secret on the internet, even if your name and profile picture aren’t above the post.

Hold on to your identities, anonymous apps are here to stay

As of 2014, Whisper allegedly had ‘many millions’ of users, and Yik Yak is incredibly popular on US college campuses, leading to a proliferation of cyber-bullying causing the app to be banned in several schools and campuses in the US. Their popularity about young people who, frankly, love to talk about themselves, isn’t surprising.

Having a space where your thoughts and feelings can roam free seems more than a little indulgent, when the very same space can be used to bully the apparently innocent views of other users completely anonymously and without backlash. No one ever asked for an anonymous app and there’s a reason for that – we have our own heads to think in, we don’t need yet another app. However if their recent popularity is anything to go by, these apps are here to stay – for the time being, at least.