Spotify wants to help you run harder and further. Here’s how the music streaming giant is hoping it can eek more miles out of your running shoes

Music and running pretty much go hand in hand for most people. So as part of Spotify’s revamped service, which introduces non-music content for the first time, it’s also adding a new Running feature.

We’ve had a little demo of Spotify Running, so here’s the ins and outs of how it could change the way you head out for that big weekend run or lunchtime treadmill session.

How does Spotify Running work?

It’s pretty simple really. Once you’ve downloaded the new Spotify app, you should now find a dedicated Running section within the dropdown menu on the app’s main homescreen.

The first thing you’ll need to do is work out your running tempo. In the Start Running mode, the app will prompt you to run at a steady pace. It’ll then use the accelerometer built into your phone to track the motion. The running tempo is then turned into beats per minute, which then helps build playlists based on that data.

Tracks used are taken out of Spotify’s existing catalogue and is a mixture of human and computer curation. To make sure you don’t end up with a playlist full of music you hate running to, it’ll base selections on previous listening history.

Additionally, Spotify is introducing something called Running Originals. These are songs that dynamically adapt to your running tempo. There’ll be six Running Originals tracks at launch and house DJ Tiesto is one of the first to contribute a tempo-changing track. 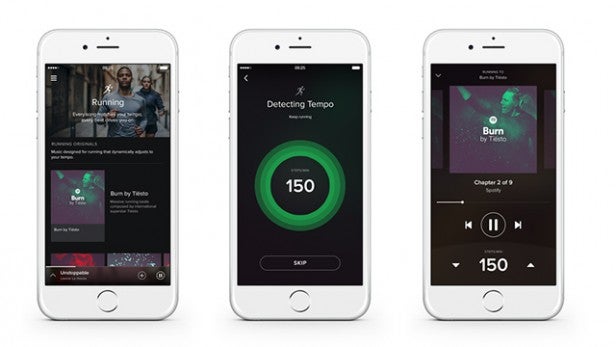 What phones does Spotify Running work on?

Unfortunately for Android and prospective Windows 10 Mobile users, this is a feature just for iPhone users right now. Currently, there’s no news when we can expect it to land on other platforms.

As for Apple Watch and Android Wear support, we asked Spotify about this and they told us that it hopes to bring the new features to multiple platforms. But for now, it’s focusing on the iPhone.

How can I get it?

If you’ve got an iPhone, you can download the Spotify app or update the existing one and you should now have access to all the new Spotify features including the Running mode.

For Nike+ Running users, Spotify will be integrating its Running features into the fitness app in the Summer. It’s also planning to add the same integration to Runkeeper later this year. 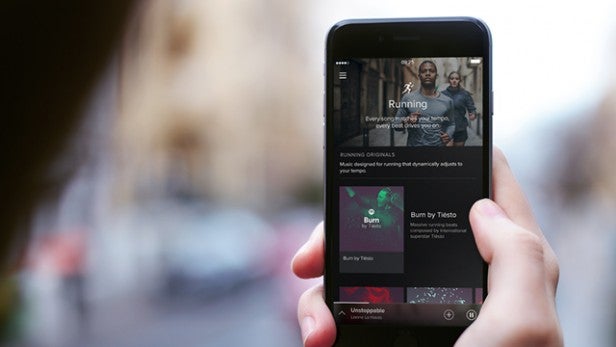 Yes, it’s not the first app to try and match music to your running tempo. RockMyRun and the Android based PaceDJ also works in a similar way. While PaceDJ relies on using your own music archives to create the running playlists, RockMyRun provides music and mixes from its own application.

What’s more interesting is that Spotify has already recently partnered with Adidas for its Adidas Go app, which matches stride data to Spotify playlists. The Go app also lets you save favourite tracks along with recording your MiCoach RunScore data.

Have you downloaded and tried out Spotify Running? Let us know in the comments section below.