After the disaster that was the F1 2014 game, how has Codemasters made F1 2015 the definitive Formula One game? Steve Boxer speaks to Game Designer Lee Mather to find out.

Formula One fans have a rare bonus this year: Codemasters has managed to get the videogame F1 2015 into the shops while the season is still unfolding, whereas previous F1 games have come out when the real-life racing has been all but over. We caught up with Principal Game Designer Lee Mather at Codemasters’ headquarters at Southam in Warwickshire. F1 2015 – Codemasters’ first Formula One game specifically designed for the current-gen consoles – is very much Mather’s baby, and he was able to give us a deep insight into several key areas of the game.

Perhaps the most striking aspect of F1 2015 is its mid-season arrival. In order to do that, Codemasters has created a bit of confusion, by including the 2014 season – with different cars, drivers, teams and circuits than the current one – on the disk. Yet you can play a full 2015 season, thanks to a day one software update, which is already up and running. 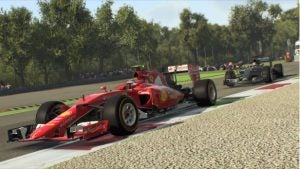 Mather, happily, was able to explain everything:

“The content on the disk will be all the 2014 season, plus the 2015 season as it would have been at the pre-season tests. So, Manor Motorsport wouldn’t have been present, McLaren would have been in their original livery, and all the minor changes that have occurred since would not have been present. However, the day one content update adds in the new livery for McLaren, the Manor Marussia team, and any minor changes to the cars and the circuits since pre-season. The cars it brings are the full, signed-off Melbourne-spec ones. So the full 2015 season will be in the content update.”

But, Mather adds, another key factor in F1 2015’s mid-season arrival is the way in which Codemasters’ relationship with the Formula One authorities and individual teams has developed in the seven years since the developer acquired the licence to make Formula One games. 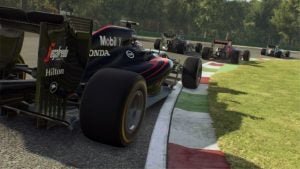 Codemasters’ relationship with the real F1

Mather is happy to provide some insight into the company’s dealings with the F1 firmament, and argues that both sides benefit the other:

“I know that the relationship we’ve got with Formula One Management has got stronger and stronger every year. I think they’ve learned a hell of a lot from us, and I think we’ve learned a hell of a lot from them. Obviously, Formula One is moving quite quickly now into this generation in which everybody is online, and it is getting a younger audience, which it probably didn’t traditionally have.”

“It’s getting the exposure via social media which it didn’t traditionally get, and it is really starting to learn from the way that we do things [in that world]. We’re having to learn a lot from them as well, such as how to manage a strong brand like Formula One, which is so global and high-profile.”

Early access to the teams’ new cars really helped, too, he adds: “We do get really good access these days. Yesterday, the guys were down at Force India, and they had Sergio Perez playing the game. It’s nice to have the drivers sitting and playing the game, and giving us some feedback. Perez was playing it on the hardest setting, and it took him a few laps before he was lapping cleanly. It’s good to see that he couldn’t just jump in and play.” 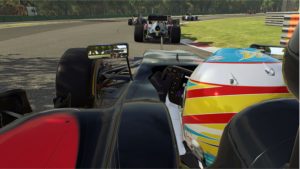 So what, in Mather’s estimation, did the leap to the PlayStation 4 and Xbox One bring to the game?

“Sometimes in a racing game, because there’s a detachment since you’re not in a physical moving object, you need to be able to relate what you do on the controls to what the car is doing on the screen. That’s what we’ve been able to do far better this time around, because the inputs that you make give the expected result with the car. So, the throttle is incredibly sensitive, the brakes are really strong, the steering is incredibly direct – and all those things come across far better. With less input lag, you can really dance the car around.”

“And with the better feedback that you get these days through the controllers – even with a pad – we’ve got the rumble that you start to get at peak-slip. So if you push too hard through a corner, you start to feel that you’re overheating the tyres and putting too much loading into them. And the same applies with the braking and the throttle – it all comes back through the pad. And also with the visuals – you get the tyre smoke. Plus you get the little audio chirps when you’re on the edge of adhesion, and then the full-on scream as you lock them up. So, that’s something we can really get across now.”

“Plus it allows us to have cars that have more depth to the handling. At first, you can get the car around, but then you can start to push harder and harder, and you start to feel those little nuances. That’s where the crucial tenths of a second come from – when you start to really learn how to adjust the car at the apex on the throttle a little, to get it to rotate a bit more, but you obviously don’t give it too much so that it spins.” 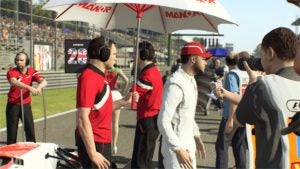 Making sure it appeals to different driver levels

Mather is proud of how, despite making F1 2015 accessible to those whose driving skills don’t exactly scream “Lewis Hamilton,” Codemasters has added much to the game which should appeal to the racing hardcore, who typical own steering wheel/pedal combos and like to play online.

In particular, the company has added the ability for keen online players to enact full practice sessions at each track:

“That’s something we’ve had a lot of people call for in previous games: the ability to practice amongst themselves online before their league races. So now we’ve got the ability to do that, and it’s especially nice when people race in teams, because then they can share their setups and talk about what they are doing.”

Then there’s the Pro Season mode, which sees F1 2015 at its most sim-like:

“Pro Season is the ultimate challenge: it’s hard, and it requires the utmost concentration. The cars are delicate and the AI is very racey; the camera is in cockpit mode, so you do get that slightly claustrophobic feeling, and you don’t have the awareness of everything that goes on around you.”

“ So, Pro Season puts you in the driving seat with no assists, 100 per cent race-distance, all the practice and qualifying sessions.”

“What I’ve really been enjoying is, say, driving around Mexico, a track which is new and I’m not really familiar with. I’ve been using the practice sessions to learn it, and seen my times gradually come down. It gives you that real sensation of what it must be like to arrive at a circuit, and work your way up to a point at which you feel confident enough to push and drive the car hard.”

See also: Xbox One backwards compatibility – Can you play Xbox 360 games on Xbox One 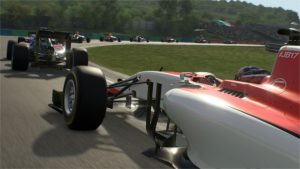 What about the hardcore F1 fans?

But the key factor for attracting the hardcore, who in the past haven’t always committed to F1 games as the franchise has to have true mass appeal, is the handling subtlety, according to Mather.

“The thing that will attract them the most is definitely the depth of the handling that we’ve got. It’s a far more accessible title, I think, than we’ve made previously, and the assists make it easy for people to play. But when you reach the high end of the scale, where people are playing without assists, the tenths are found by the guys who are the best drivers. If you are that good, you will be that good in the game.” 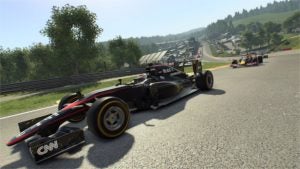 Where did KERS go?

Finally, Mather clears up one seemingly obvious omission in this year’s game. Last year’s game had a KERS system which used reclaimed energy to give you a speed-boost, and you could trigger it at strategic points around each track.

But this year’s cars use a different system, now designated ERS, and there’s no way of triggering it manually.

“We haven’t got manual control over the ERS. Predominantly because, when we originally implemented the systems, there was always talk that it was an integrated unit, so it was a case of having an internal combustion engine with the various electronic systems, and they were all managed through the mapping. And then it came about through the conversations that you heard with the race engineers [last year] that there was a push-to-overtake button, and things like that.”

“With ERS, it’s not in the sport in the same way that it used to be, where you have a button like that, but it’s done through the engine-mapping. We give you the ability to change your throttle map between three different settings, which again adjusts all those parameters within the engine, so we include it as part of that.”