The terrorist attack on the Boston Marathon is the latest news bandwagon to be jumped on by social media and so-called ‘citizen journalism’, but did all the furious activity online actually help and what does the online reaction to the bombing say about how news is made?

The Event and The Fallout
On Monday 15 April, two home-made bombs went off at the finish line of the Boston Marathon. Three people were killed, one of whom was an eight year-old boy. Almost two hundred others were wounded with many suffering horrific injuries.

Barely after the explosions had subsided, and certainly before emergency services had responded, the news spread quickly via Twitter and other social media. The first burst of tweets and posts concerned the explosion, then the casualties and then the conspiracy theories. Was this another 9/11? Was it a foreign attack or domestic extremists?

It wasn’t just news and rumour. Almost every significant event now comes with an honour guard of parody Twitter accounts, memes and fakers. After the first suspect was killed in a police shootout, a fake account for his brother and co-conspirator, Dzhokhar Tsarnaev, appeared on Twitter. The newly-minted account tweeted a handful of threats against the police and citizens of Boston, as if Tsarnaev had found time during the manhunt to hole up in an internet cafe and set up an online presence for himself. 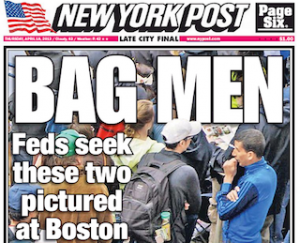 At the absolute bottom of the Twitter barrel, someone thought they would try their luck at scamming people into following them by pretending to represent a charity. The account was quickly suspended.

On the other hand, Twitter in particular proved very useful in communicating emergency messages to remain indoors, calls to donate blood and provide help and to spread contact numbers for anyone trying to find missing friends or relatives.

This kind of reaction is becoming almost routine, but in the case of the Boston bombing things went a little further. People began to pore over photographs and footage of the bomb scene, trying to spot anyone who looked suspicious or any clue that could identify the killers.

Posters to the Reddit forum http://www.reddit.com/r/findbostonbombers ‘identified‘ several possible suspects from their amateur analysis of photographs and footage of the bombing and the aftermath. Eagle-eyed Redditors spied people carrying backpacks supposedly similar to ones found, bomb-damaged at the scene.

Stills were blown up and multiple angles were offered from different sources. Several likely suspects were singled out, whom forum posters speculated could be the bombers. As the manhunt intensified, people listened to Police radio scanners and reported what they heard as though it was verified news. 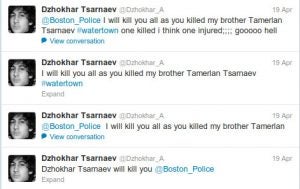 As it turned out, these speculations were wrong. Police radio chatter is notoriously unreliable and prone to a ‘fog of war’ effect where people on the ground don’t have the full picture. None of the people ‘identified’ by forum posters has proven to be connected with the bombing and at least one has been forced to lock his Facebook account and seek legal advice about possible defamation.

This mass of misinformation is now being held up as a reason why we should be sceptical of citizen journalism and using social media to spread news. In reality, though, there was little that took place online that did not have an equivalent in the offline world.

The internet got it wrong, but so did the press.

Loose Lips Sink Ships
Supposedly reputable news sources were also reporting rumours and often wild speculation. The bombers were Saudi terrorists. There were multiple devices being found across the city of Boston. Arrests had been made. Arrests hadn’t been made.

The New York Post splashed photographs of two men, identified as possible suspects by Reddit or 4Chan users with the headline “BAG MEN.” Both were entirely innocent. On TV, CNN anchors frantically backpedaled from its reports of a Saudi man being arrested when it emerged that no such suspect existed and that pictures of the ‘arrest’ were from an unrelated incident.

Far from offering sober, well-sourced journalism in the face of internet speculation, several media outlets found themselves relying on that speculation to fuel their own bulletins. At one point, CNN viewers were faced with the unedifying sight of a news anchor simply holding his iPad up to camera to show the latest suspects.

The reason the media made these errors is partly down to the same thing that drives people on social media to spread rumour – the desire for a scoop. An exclusive is valuable to newspapers and TV or news wires because it attracts readers and viewers. At the most basic level, being first is worth money.

The Race to the Bottom
People might not get paid cash for tweeting the news, but on the internet, attention is a form of currency. Being first to post a scoop is a surefire way to new followers, retweets and the chance to go viral. This is not to say that there are no good reasons to tweet about current events, just that there is an often unacknowledged motivation for doing so quickly and without checking sources.

That is why people retweet news reports or post to their Wall as ‘witnesses’ to events they have just seen on TV. They are getting the residual attention from someone else’s exclusive like some kind of contact-high. You might not have the exclusive, but you can report the news that there is news. This is undoubtedly a failing in the way social media responds to a crisis, but the failure is common to ‘old’ media too.

The are two key differences between traditional news media and the unofficial news network of the internet. One is, as often pointed out by actual journalists, that news media can give proper analysis and context to news and serve as a filter to separate wheat from chaff.

Old vs. New
But the other is equally important. There may be no editorial hand guiding the mass of tweeters and forum posters but what it lacks in direction it makes up for in speed and flexibility. Reddit may have pointed the finger at two innocent people and led to the New York Post splashing their faces under a lurid headline but the truth, that neither man was connected with the bombing, was also discovered by Reddit posters. The site self-corrected and took steps to put right its error. The subreddit in question is now closed.

This kind of self-correction should be how traditional news operates, but we have only to look at the case of Chris Jeffries to see that it doesn’t always work like that. Jeffries was awarded substantial damages in 2011 for “seriously defamatory” articles published about him in eight newspapers following the murder of his tenant, Joanna Yeates. Had the same defamatory comments come from somewhere like Reddit, it seems likely that the eventual climbdown would have happened sooner.

Like it or not, the speed and convenience of social media is irresistible in the event of a crisis. People use it as a way to find out, right now, what is happening, and that immediacy is incredibly useful in the first few hours after a tragedy or emergency. As the clock ticks on, the amount of noise will build up and drown out anything resembling facts, and this is where it is sensible to seek more contextualised news sources rather than relying on the rumour mill. But this is true of any news, whether it exists as a group of tweets or a breathlessly anchored TV news bulletin.

This isn’t a fight between old and new media. Both are have their strengths and flaws and both are trying to do essentially the same thing – get to the truth. It is unfair to say that news from the internet should be taken with a pinch of salt. In reality, that applies to all news, whatever the source.