After pwning the European champ, Google’s AlphaGo learning computer, dubbed ‘the Apollo program for AI,’ has now conquered the planet by taking an unassailable 3-0 lead in the best of 5 series against reigning Go world champion Lee Sedol.

Although the machines have been whooping their human masters at board games for decades, this is much more significant. This ancient game of moving black and white pebbles around a board to occupy territory was thought to be the last vestige of human intelligence superiority when it comes to board games.

Why? Because, unlike solvable games like Draughts and Connect 4, Go requires human-like thought and strategy, not just crunching possible moves to come up with the best.

In mourning of what could be the final defeat before the Cylons show up, here’s a reminder of the other times humanity’s superiority have been unceremoniously usurped.

Humanity is in Jeopardy!…

In 2011, IBM’s supercomputer Watson, (you know, the guy who Bob Dylan talks to in the IBM commercials?) earned a stunning victory over two champions in the timeless US game show Jeopardy!.

Initially it struggled as all-time great players beat it to the buzzer and thought of the answer on the spot. However, after three games of play Watson racked up $77k, while the nearest challenger Ken Jennings earned $24,000. “I for one welcome our new computer overlords,” Jennings wrote in his final answer.

Humans losing at chess against computers is not remarkable, really. I’ve never beaten the built-in app in Mac OS X. But, then again, I suck. I’m not the most famous grandmaster in the history of the sport.

In 1996 Garry Kasparov struck a transitory victory for humanity as it took down IBM’s ominously named Deep Blue; a program designed explicitly to beat him.

He famously claimed he did it to “help defend our dignity.” Good on you, Gazza!

However the series wasn’t without incident. The grand master lost the first game after being flummoxed by an un-computer-like move.

“It was a wonderful and extremely human move,” Kasparov noted, and this apparent humanness threw him for a loop. “I had played a lot of computers but had never experienced anything like this. I could feel – I could smell – a new kind of intelligence across the table,” Kasparov told TIME at the time.

In later years it emerged the move may have been a bug in the programming caused by Deep Blue having too many options, so picking one at random.

Kasparov recovered to easily win the six-game series, but the next year was a different story. A vastly improved machine struck back. DeepBlue emerged victorious 3½–2½ in a 6 game series against the great Russian.

These days there are chess championships humans aren’t even allowed to enter.

Back to the draughts-ing board

It’s now impossible to beat a computer at draughts and has been for almost a decade. Back in 2007, Canadian computer scientists devised a program that ‘solved’ draughts. A human playing a perfect game can only muster a draw against it.

“This was a huge computational problem to solve – more than a million times bigger than anything that had ever been solved before,” said Professor Jonathan Schaeffer (via BBC News).

The professor behind the Chinook program claimed to be awful at draughts, but his platform had won the World Checkers Championship as early as 1994. However, it only became unassailable in 2007 when Chinook worked out the best moves to play in every single possible situation.

Thankfully, we’re still a ways away from solving Chess.

Researcher Claud Shannon reckons a computer would need to analyse 10120 possibilities to play a perfect game (via Wired).

Get two competent Connect 4 players together and, invariably, the games will end in a full board and a frustrating draw. However, in the US they have limitless overtime where competitors stare each other out until someone wins (just kidding).

However, way back in 1986, researchers found that if the first player drops into the centre slot first they can always win. Only with one imperfect move can the second player triumph.

In the 30 years that have followed, there are now ‘solvers’ available online telling you the perfect move to play at any given time during the game. Where’s the fun in that? 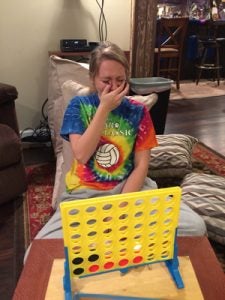 There are three parts of the IQ test. The maths and logic parts are right up a computer’s alley. In the third part, verbal reasoning, we’ve always had the advantage. After all, what separates us from computers is our ability to use reason. It flummoxes the machines, you see.

However, last year researchers from the University of Science and Technology of China teamed up with Microsoft Research in Beijing to best average human performance in these questions (via Technology Review).

They built a learning algorithm that made it possible to discern between multiple meanings of the same word, the absence of which had undone previous efforts. They also developed a method of discerning between categories asking for analogies, word classifications and opposites.

“To our surprise, the average performance of human beings is a little lower than that of our proposed method,” the researchers said last year.

“With appropriate uses of the deep learning technologies, we could be a further step closer to the true human intelligence.”

Pretty soon they’ll be able to reason with us. But will they even bother by that point?

He is The One…

One man stands alone against the machines; one man offers hope for all of humanity. That man’s name is… erm… Nigel and he’s from New Zealand.

Not content with being the best English language player in the world, multi-time world and US Scrabble champ Nigel Richards (who doesn’t speak French) decided to memorise the entire French Scrabble dictionary in order to best their champion. He did it in 9 weeks too. 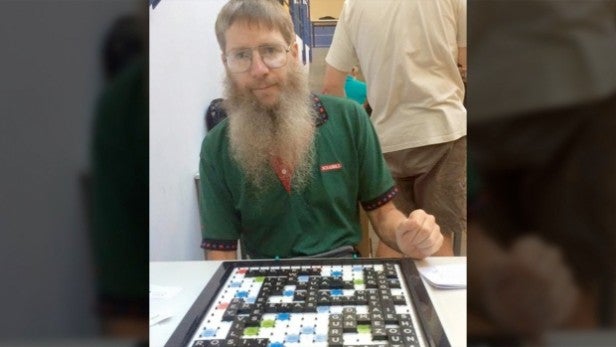 Our Nige’s mother has high praise, stating: “I don’t think he’s ever read a book apart from the dictionary,” while a fellow competitor once described him as “a computer with a big ginger beard.” (via Guardian)

Is he a Cylon? Or, in 20 years time will be travelling back in time to make sure this man lives.