Google has announced a new Android tablet called Pixel C. It’s not a Nexus device, but a stable-mate to the premium line of Chromebook Pixel notebooks.

The Pixel C, available before the holidays from $499 offers a smart keyboard accessory and a high-end spec sheet a la the Apple iPad Pro and the Microsoft Surface Pro, but can it compete with Apple and Microsoft’s top offerings?

Here’s everything you need to know about the new premium tablet, made by entirely by Google.

What’s the difference between the Nexus and Pixel ranges?

It’s quite simple really. Google says Nexus devices are always made in conjunction with a partner manufacturer. For example, the new Nexus phones are made by LG and Huawei and will be marketed as such.

The new Pixel C is made by Google “end to end” like the high-end Chromebook Pixel namesake. Google says the Pixel range is designed to “push the boundaries of hardware while showcasing the best Android and Chrome OS experience possible.” 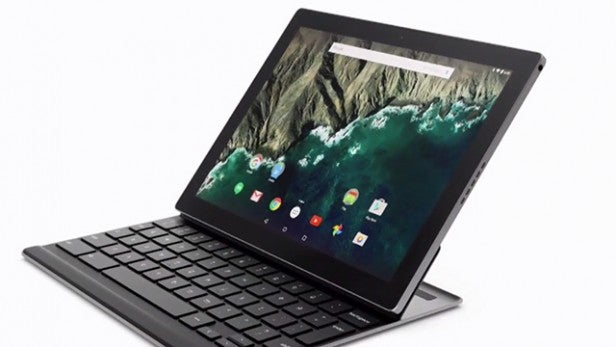 So does it run Chrome OS or Android?

Unlike the Chromebook Pixel notebook range, it will not run the Chrome OS web-based operating system. It arrives with the new Android 6.0 Marshmallow operating system out of the box. Google says it is “excited to be expanding our Pixel line across both Chromebooks and Android tablets.”

Google says the software will be updated every six weeks or so to refine the experience, but didn’t talk a lot about specific features during the event.

Perhaps the neatest software feature previewed during the keynote was the ability to tap the light-bar on the back of the Pixel C in order to get a quick indication.

Google didn’t get specific about battery life, other than to say it was “great.” Gee thanks. 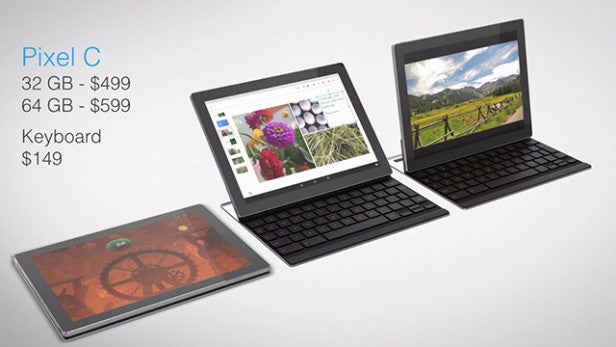 Is this a premium hardware experience too?

Hell yeah, it is. The Pixel C has a  4:3,10.2-inch display with a 308ppi pixel density and 500nits of brightness. The company didn’t go into specifics about the resolution, but explained the screen size had been chosen to reflect the size of a piece of A4 paper in portrait and landscape mode.

It also follows the design language showcased by the Chromebook Pixel notebooks, with the “clean lines and anodized aluminium design” and sturdy and solid feel.

In terms of audio, there are 4 far-field microphones included on the device to enable reliable voice communications. Like the Amazon Echo speaker, this has been designed with the view that a tablet generally stays in one place in the room, rather than being carried around like a smartphone.

There are also stereo speakers on either side of the device.

What’s so smart about this keyboard?

We’ve heard a lot about tablet keyboards lately, following the launch of the iPad Pro and the success of the Surface Pro range. Google says the full-size keyboard was “built in tandem with the Pixel C in order to complement each other.”

Google says it is rethinking the keyboard accessory from the ground up. It has fully-adjustable display angles (100 and 135 degrees) for easier use at your desk or on the lap.

It’ll also automatically charged inductively whenever the Pixel C is closed. Google says just a few minutes a day closed will keep the battery charged, while it’ll last for two months if it remains open.

When you’re ready to go back to full touch controls, the keyboard can be attached to the back of the Pixel C tablet magnetically.

Unfortunately and unsurprisingly, it isn’t bundled in with the tablet. The keyboard will set you back an extra $149 (about £98) and will come in a choice of leather or aluminium. That’s still cheaper than Apple’s new proprietary Smart Keyboard, which is $169. 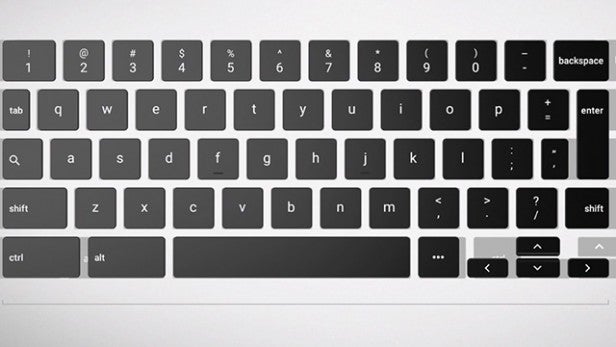 Yep, each of the new mobile devices announced by Google today opt for the new, faster, reversible solution for charging and data transfer. This will mean you can use the same charger for the new Nexus phones and Pixel tablet. Google also added USB Type-C is coming to Chromebooks in the future.

So, when can I get the Pixel C and how much will it cost?

Google was pretty vague on this front. The slate will arrive ‘in time for the holidays’ and will cost $499 for the 32GB and $599 for the 64GB model. That’s about £329 and £395 respectively. However, Google has advised us to stay tuned for UK pricing and availability details.

That’s much cheaper than both the iPad Pro and the Microsoft Surface Pro range, which both start at $799. However, both are higher-end options in terms of tech specs. 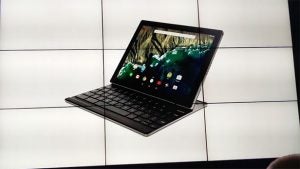 Can it tackle the iPad Pro and Microsoft Surface?

However, beyond the keyboard, Google is yet to really explain how this will really benefit users hoping to work and be productive on their tablet.

Both the iPad Pro and the Surface Pro are geared towards replacing the traditional laptop experience, the latter has been especially successful in that respect with its full desktop apps. Meanwhile the iPad Pro pledges to revolutionise how creative professionals’ work thanks to powerful new iOS apps and a new Pencil tool.

It remains to be seen whether the Pixel C running what appears to be a largely generic version of Android Marshmallow can make a similar promise, or whether this is just another high-end tablet with a focus on entertainment and a great keyboard that makes word processing and emails easier.

Google has promised more info in the coming months, so stay tuned.