The Google Nexus 7 is on our doorstep, and while the Amazon Kindle Fire still hasn’t been released here in the UK, Google’s tablet is a clear reaction to that 7in wonder. But how do their specs compare?

Both the Amazon and Google tablet contenders have plastic backs. One has dots, the other does not, giving the dotted Nexus 7 a more immediately tactile feel. The Google is also significantly lighter than the Kindle Fire – 73g may not sound like a lot, but it means a great deal in tablet town. Both will be comfortable enough to hold one-handed on the bus, but we’d much rather palm the Nexus 7.

The Nexus 7 is also a little slimmer than the Kindle Fire, at 10.5mm thick to the Fire’s 11.4mm. Why such a difference? The Kindle Fire was manufactured by Quanta, the company behind the BlackBerry PlayBook tablet, while the Nexus 7 is made by Asus, which has a great deal of experience slimming down tablets in its Transformer series. 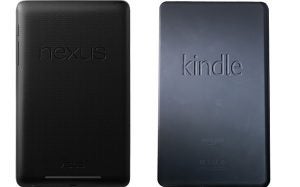 The Nexus 7 uses a textured finish

The numbers speak for themselves – the Google Nexus 7 screen is categorically better than the Kindle Fire’s, although both offer top-quality displays. At the 7in size, 1,024 x 600 pixel resolution equates to 169dpi, and the Nexus’s 1,280 x 800 pixels 215dpi. That’s a huge difference, one that will make the Google tablet’s text and images appear much sharper.

Both tablets use IPS (in-plane switching) screen technology, best-known for its inclusion in many of Apple’s devices. This provides excellent viewing angles – perfect for crowding people around a display. Although, would you really want to get your friends around to watch a movie on a 7in screen? 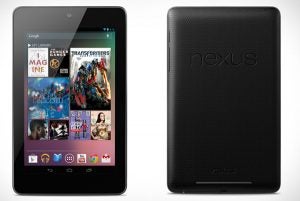 The Google Nexus 7 front and rear

These tablets are designed in part to make use of the online services its manufacturers offer. Amazon has its bookstore and Google has its roster of music, video and apps stores (in the US at least).

Once again the Nexus 7 has the upper hand here, though. The Kindle Fire software is based on an old version of Android and – for a while at least – the Google Nexus 7 will get Android updates as and when they happen. Android Jelly Bean brings significant speed optimisations to the platform, and the Nexus will probably make the Kindle Fire look like a bit of an old dog. That said, some may prefer the simplicity of the Kindle Fire UI. 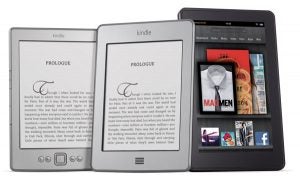 Kindle Fire – definitely the black sheep of the family

They use different app stores too. The Kindle Fire has the Amazon Appstore and the Google Nexus 7 – obviously – uses the official Google Play store. We have plenty of lingering quibbles about Google Play, but it’s hard to argue that it’s not the victor here, with a far larger library.

These hot pieces of plastic are on lockdown. Connectivity on offer is minimal, and – most importantly – you can’t expand upon the internal memory. The Google Nexus 7 comes in two flavours, 8GB and 16GB, while the Amazon Kindle Fire only comes with 8GB.

Neither has a dedicated video output, although you can plug each into a computer and drag ‘n’ drop files easily enough. We understand the choices that went into limiting connectivity – it lets the 16GB Nexus 7 sell for £40 more than the 8GB version and nudges people towards the respective online services. But we don’t have to like ’em.

At the release of the Amazon Kindle Fire in November 2011, we applauded its chopping-out of cameras. It seemed the most sensible way to get the price down to a suitably friendly level. But now the Nexus 7 has come along and proved that nowadays one can be squeezed in too.

The Google Nexus 7 uses a single user-facing 1.2MP camera, to let you video chat. It’s something not everyone will use, but is a worthwhile feature and another little stabby knife the tablet can jam into the back of Amazon’s effort.

Aggressive pricing just reached down to a whole new level. In the US, the Nexus 7 is priced identically to the Kindle Fire – $199.99 for the 8GB edition. And for once we’re not getting done over in the UK, either – it’ll cost £159 here.

Both remain good value, but the extra features, power and resolution of the Nexus 7 make it seem like the much better deal. Sorry, Kindle. 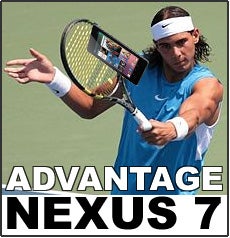 What a difference six months can make. The Google Nexus 7 has a better screen, better software, more power and a sleeker body than the Amazon Kindle Fire. What was once a bargain is now looking a bit “past it”. However, with rumours of a Kindle Fire 2 constantly bobbing to the surface, you can expect a new Amazon tablet with some of the Nexus 7’s benefits to appear before too long.