“Is it really that good?” a friend of mine asked me earlier this week. He was, of course, referring to the Google Nexus 4, a revolutionarily-priced new smartphone.

I confirmed to him that for the asking price (£239 8GB edition; £279 16GB edition) it most certainly was. Later that evening, unable to buy a Nexus 4 from Google’s site, my friend went onto eBay and bought two Nexus 4s for a total of nearly $1,200 – the second for a friend, forgetting all about the UK’s alarmingly expensive import duty and taxes. Several frantic emails later he is now dutifully waiting for the Nexus 4 to come back into stock in the UK. 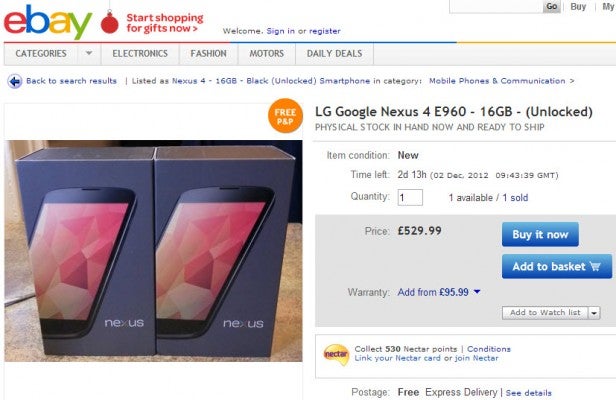 Search the web and you’ll see this type of story isn’t uncommon. In launching a handset with truly cutting edge specifications in the price bracket of a low-end smartphone Google has caused a sensation. Sadly, however, the botched launch has caused equal frustration and hysteria.

It went wrong from the outset. The Google Nexus 4 went on sale on 13 November at 8.45am, 15 minutes earlier than expected, and caused a virtual stampede. The Google Play store ground to a halt and within 30 minutes all Nexus 4 stock was sold. It took about the same amount of time for the recriminations to start. Some users complained of having successfully placed orders only for Play not to register it, others found they had inadvertently bought two, their anger subsiding when they realised the aforementioned eBay potential.

Google said more stock would be “coming soon”, but in the two weeks since there was no communication, no option to pre-order, no restock dates – nothing. On 26 November, Google finally told US customers sales would finally restart the following day. At the time of writing, outside the US the silence continues. 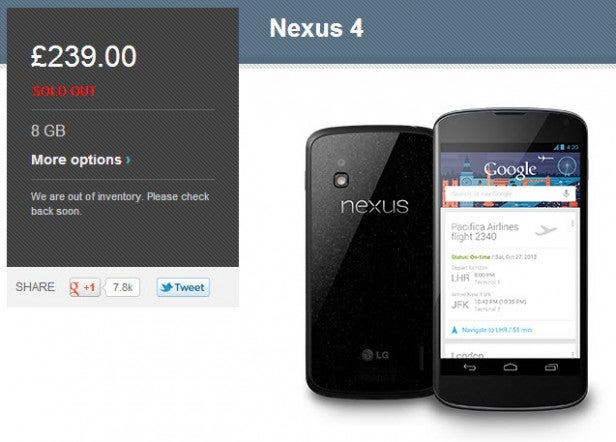 Had this been Apple by now we would have had a smug, self congratulatory press release detailing the millions of units sold in the opening week. Selling out in less than 30 minutes, however, suggests Google is far from shifting millions and it is also far from implementing the same slick supply chain as its Cupertino-based rival. Making a device people want is hard enough, getting the stock in place to meet the demand it generates is in some cases even harder.

What makes this worse is the opportunity being missed because the Google Nexus 4 has the potential to change not just the smartphone sector, but the entire telecommunications industry. The pricing makes purchasing a flagship handset more or less incidental (by comparison a 16GB iPhone 5 costs £529) and it reduces the need for long term contracts, putting the consumer in a position to choose better value SIM-free monthly deals and taking the power away from greedy networks.

And they are greedy. Since the contract-free Nexus 4 sold out on Google Play networks have been quite simply exploiting their customers. O2 has come in for most abuse demanding a two year £36pm deal to get a free Nexus 4 which adds up to nearly £900. It is also selling the 16GB edition for £399 on pre-pay, a £120 hike on Google’s official RRP. Three and the Carphone Warehouse have similarly joined in demanding £35pm and £31pm two-year deals respectively for the handset and Three, usually the champion of good deals, will also charge £399 for the 16GB-er contract-free. 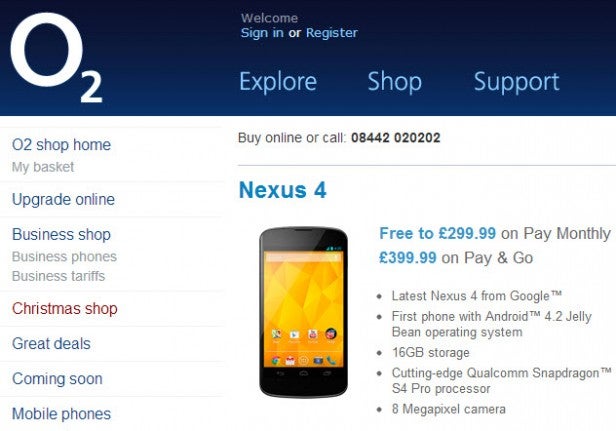 The irony is not lost on us that networks are exploiting customers most with a handset that was designed to set them free, but Google’s proposition will not be taken seriously until it can supply enough handsets direct to make networks take notice. That may not come until a Google Nexus 5.

Until then Google is playing a dangerous game. Instead of being a hammer blow the Nexus 4 has instead acted as a shot across the bows, warning partners, networks and platform rivals of its plans. Admittedly some foresight was gained from the Google Nexus 7’s ruthless tablet partner cull, but Google’s stuttering declaration that it intends to do the same to smartphone makers gives them valuable time to react.

How they do will be fascinating. Apple has never competed on price, but the iPad Mini has shown it is prepared to drop new products into more affordable segments where threat lies. Meanwhile Android partners – particularly smaller ones – must now be questioning whether their only option is to shift allegiance to Microsoft and the lower volume but potentially larger profit margins of Windows Phone 8. It will also be intriguing to see whether Microsoft realigns the pricing strategy for its widely expected Surface phone.

All of which means Google has indeed started a phone revolution with the Nexus 4, but in badly mishandling the launch it may no longer be in control of it…