Last month, the first Google Glass units rolled out to the “bold, creative individuals who qualified for Google’s Glass Explorer program. The enty fee? A mere $1500. Before its launch, Glass was dogged with scare stories about how it would be an invasion of privacy for anyone around one of its users. But should we all be worried?

Starting the backlash against Google Glass, a few lapdancing clubs in Silicon Valley noisily declared that they would ban the device to prevent punters capturing the moment using their hi-tech specs. A pressure group was set up to campaign for controls and concerns were raised that Glass could be a stalker’s dream.

The reaction to the device itself has been fairly mixed. There have been gripes about the feeble battery life, and some users find the Glass experience a bit empty and of minimal use beyond the initial wow factor. In part, this is due to the lack of apps.

Just as iPhone version 1.0 was little more than a novelty touchscreen phone with a good web browser, Glass 1.0 seems like a novel but ultimately very limited heads-up display. What turned the iPhone’s fortunes around was the app store and the huge numbers of inventive and innovative apps that quickly flooded it.

So it is likely to be with Glass. Once developers get a feel for the hardware we could soon see a killer app. It’ll likely to be something nobody has thought of before that could only exist on Glass.

As the first apps begin to trickle out however, one in particular has brought the controversy about Glass’s privacy implications to the fore once again. Winky is a simple app – an applet, really – that adds the ability to take photographs of whatever you are looking at simply by winking.

The standard way to take photos using glass is to tap the thin touchpad strip at the side of your head or just to say out loud “Ok, Glass take a picture”. Both methods make it obvious that you are doing something – the latter also underlining the point that you are a massive dork. Switching this to just a wink is more convenient and as the developer says “lets you lifelog with little to no effort” but it also makes it much easier to take a photo without the subject noticing.

Unsurprisingly, this has many people concerned that Glass – and other tech like it – may lead to a spate of ‘creep shots’, men taking surreptitious photographs of women without their knowledge and uploading them to forums like Reddit or even Twitter.

An outright ban on wearable computing seems like an overreaction and would anyway be unlikely – there is too much of a cross-over with smartphones and there is no way we are going to give those up – so could there be other ways for people to protect themselves?

There are already, and devices that try to combat surveillance systems and protect privacy. These range from subtle gadgets to detect cameras to enormous installations of systems designed to thwart paparazzi.

Make some noise
That ‘camera shutter’ sound effect on your smartphone may seem like a quaint bit of audio skeuomorphism but it actually performs two rather useful functions. First, it lets you know when you have taken a picture – handy in bright sunlight if your phone screen is very reflective – and second, it lets other people know that you have taken one.

Manufacturers in Japan joined forces a few years ago to ensure that all camera phones and digital cameras emitted an audible cue when taking a picture – a deliberate move to discourage stealthy photo sneaks on public transport or in other crowded places. In South Korea, it is actually illegal to use a digital camera or phone without an accompanying shutter sound, which must be a minimum of 64 decibels.

Sniffing out trouble
One tool that could prove useful if you are worried about Glass or other networked devices is a packet sniffer. These apps scan networks – including Wi-Fi networks – by probing the range of possible IP addresses and looking for anything that responds. It would be fairly simple to create a specialised sniffer that alerts you if a particular device was on the same Wi-Fi router as you so you could take the appropriate steps.

Hope you like jammin’ too.
A mobile phone jammer won’t stop a device that records to a memory card, but it will stop any uploads to the cloud or live broadcasts over the web. Jammers are illegal to use in the UK, but if there is enough public concern it is not inconceivable that this could change.

One thing to consider if you run a mobile jammer is that it isn’t just going to block the devices you don’t want. Everyone’s mobile phone will have no signal while they are in the “Cone of Silence” and this might well discourage people from being there. A complete lack of mobile coverage might be a selling point in some venues but being unable to talk, text or tweet isn’t going to appeal to everyone. 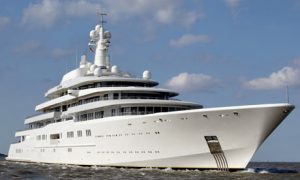 The Russian billionaire and Chelsea FC owner Roman Abramovich got so fed up of paparazzi ruining his holidays that he had his new yacht fitted with some serious countermeasures. The 557 foot long Eclipse set him back a cool $1.2 billion (some of its more modest features include twin helipads two swimming pools and a mini submarine) so adding an array of lasers down each side of the hull must have seemed like small potatoes.

The laser array is used to help detect the presence of camera CCDs, which reflect light differently than their surroundings. When one is spotted, an intense beam of light is fired at it to ruin any shot it was trying to take.

Light ’em up
You may not be able to afford a multi-million pound laser array for your yacht – most of us can’t even afford a yacht – but you could still use the same principle providing you don’t mind looking a little silly. Wearing very bright LEDs near your face can make it very difficult to take a photo of you using a standard digital camera or phone.

This guide will show you how to fit the right LEDs into a cap but you could just as easily put some in the rim of a pair of glasses. If the camera you are trying to block is sensitive to infrared light, as many mobile phone cameras are, then an IR emitter is much less obtrusive and the beams it emits are invisible to the naked eye. Perhaps future Glass versions will come with some as a built-in countermeasure for the more hypocritical user.

Social pressure and corporate agreement
Technology may not be the best way to prevent the misuse of Google Glass or whatever wearable gadgets it inspires. For the most effective way to protect our privacy we are going to need a social solution.

The Stop The Cyborgs campaign is a group of activists keen to discourage the use of Glass and similar technologies due to concerns about privacy and the way such technology may affect human behaviour.

StC may have an extreme view of how Google Glass will affect society but some of their recommendations are quite sensible. Google, the StC campaign suggests, should agree to ban Glass from running any kind of facial recognition software by blocking such apps in the Play store.

It should also implement an ‘opt out’ system that will ensure that Glass does not capture information about them. Any such information or pictures captured could remain the copyright of the subject rather than the photographer, so that they may decide how they can be used.

Rather than relying on technology companies or even governments to police intrusive technologies for us, however, by educating people about what wearable computing is capable of, society can develop its own rules and etiquette that will discourage inappropriate use.

Until that happens, we’ll be the ones wearing the hat with the infrared LED array on top.