One of the best aspects of the 21st century is that there’s no longer any shame in being a geek. And what’s great for geeks like us is the Japanese RPG (universally abbreviated to JRPG) is undergoing a renaissance. If you seek proof of that (beyond the general anticipation of Final Fantasy XV), consider this: Bandai Namco is readying three JRPGs for UK release within the next year or so: God Eater, Sword Art Online: Hollow Realization and Tales Of Berseria. Having enjoyed hands-on with the first two, I can testify that they have what it takes to get JRPG fans, at least, salivating in anticipation.

If you aren’t overly acquainted with JRPGs, a certain amount of qualification is required. They aren’t especially mainstream, and in the past, their gameplay has often seemed antiquated – although all three of Bandai Namco’s forthcoming JRPGs have mercifully abandoned the turn-based battle systems their predecessors were often saddled.

They usually cast you as one of a group of characters sharing a quest, with anime-influenced visuals – as do God Eater, Sword Art Online and Tales of Berseria – and generally appeal to those who are also into anime films and comic-books, plus Japanese Kawai culture in general. Which is why many past JRPGs were seen as too niche, and rarely released in the UK. Bandai Namco has a track record for bringing such titles to the UK, and deserves plenty of credit for doing so.

Of the three games that Bandai Namco showcased, God Eater is arguably the most interesting, and the one with the most mainstream potential. “God Eater is set in a post-apocalyptic universe,” Producer Yusuke Tomizawa explains, “in which huge monsters called Aragami are threatening humanity with extinction. So people have started wearing bracelets to hold big weapons called God Arcs, in order to fight the Aragami – those people have become known as God Eaters. 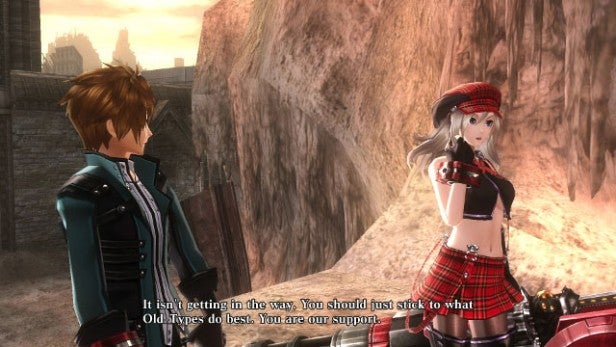 “The two main aspects of God Eater are high-speed action and a deep and dramatic storyline. You play in a four-player team. You have a great sword, which transforms to a gun or shield, and you can trigger a Devour action, which eats Aragami, mainly to extract extra resources from them.”

No JRPG would be complete without a rather arcane mechanism and, sure enough, God Eater has one, entitled Blood Rage. Tomizawa explained: “With Blood Rage, you’re making a promise, for example to cause a certain amount of damage within a certain time, which brings more stamina and extra powers. So the timing of when you launch Blood Rage is important, as it moves very fast.”

The first God Eater, subtitled Resurrection, has already come out in Japan, where it sold an impressive 3 million copies. And there’s good news for us Brits: when God Eater 2: Rage Burst goes on sale on 30 August, it will come with a free copy of God Eater: Resurrection.

Both games will be on PlayStation 4, PS Vita and PC. “Adding together the story mode of both games brings over 100 hours of gameplay, and that is without the side-missions,” Tomizawa added.

I spent ran hour playing a demo version of God Eater on PlayStation 4, which provided a pretty decent insight into the game’s battle system. Unusually for a JRPG, it’s heavily action-oriented and pretty easy to understand.

Your God Arc weapon will be your main form of attack, dishing out melee damage to foes. It’s easy to transform it into a gun – handy when you have to stand back to avoid bigger enemies with devastating attacks, and watching it morph into a dinosaur-like pair of jaws when you trigger its Devour mode is cool. The gun can also be transformed into a shield. 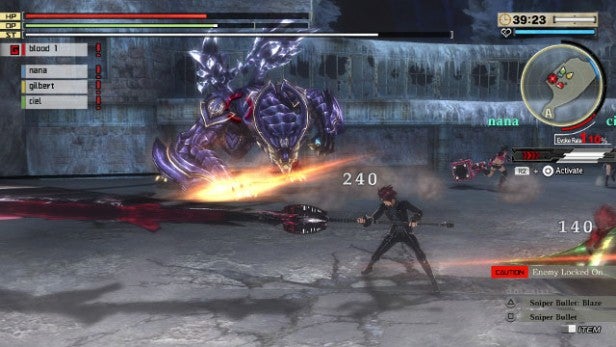 In practice I tended to employ the melee attack – bullets for the gun proved pretty scarce. Gratifyingly, my character was pretty manoeuvrable, although I had to keep an eye on the stamina gauge, with a decent jump for evading incoming attacks. The demo gave little hint of what God Eater 2: Rage Burst’s story might be like, but did confirm that, as one would hope, taking down mini-bosses requires plenty of concentration (it was also easy to pull back from the fray to heal) and patience.

As a franchise, Sword Art Online is a pretty big deal in Japan – arising from a series of novels written by popular author Reki Kawahara and spawning a number of manga comics, an anime TV series and three videogames.

Sword Art Online: Hollow Realization has a somewhat wacky game-within-a-game plot – the main premise of the whole Sword Art Online franchise is that it follows various protagonists as they progress through various massively multiplayer online games.

Producer Yosuke Futami explains: “In Hollow Realization, existing characters from Sword Art Online are jumping into a new virtual reality MMO, called Sword Art Origin. It is set in 2026, and the story starts from where Kirito, the main character, jumps into a new virtual world and meets a mysterious non-player character called Premiere, who disappears. Artificial intelligence is a major theme in the game: the characters you meet are real people in a VR world.” 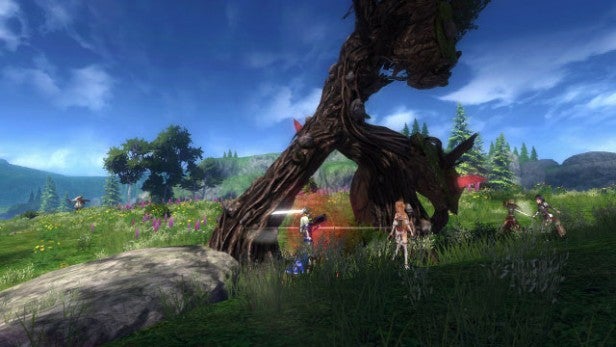 You can customise Kirito, even to the extent of changing gender and name. Hollow Realization – like its game-within-a-game – is an online RPG: you can play co-operatively with up to three others, augmented with four AI players to make an eight-player squad.

“Hollow Realization looks like an MMO, but it is action-oriented,” Futami continues. “At the bottom of the screen, you have many skill icons and buffs. If you use those skills wisely, you can get a huge advantage against all enemies. And if you ally skills together with those of other characters in your party, you can achieve damaging combos.”

While Sword Art Online: Hollow Realization has a properly action-oriented battle system, it will provide a hint of nostalgia for long-time JRPG fans. That’s because, as I discovered with an hour or so of play, its battle system doesn’t lack complexity.

The bottom of the screen hosts two ribbons of icons that represent different skills, and the idea is to combine those skills so that they initiate huge combos. Not surprisingly, going into the game with no knowledge of what those skills brought, the process of picking various ones, although easy to perform, was somewhat random. 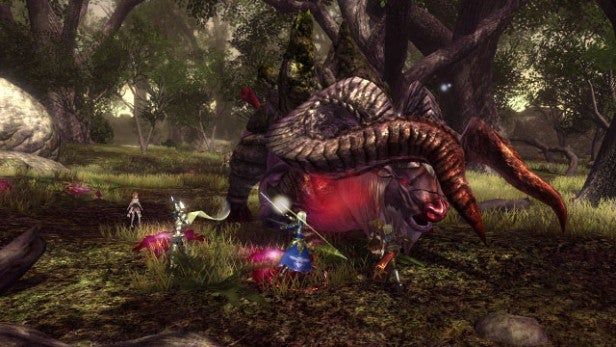 That’s the sort of complexity that JRPG fans love, though, and with luck I was able to pull off some impressive-looking combos and take down the monsters in my path. Hollow Realization’s contrast between the highly stylised anime characters and some really lush environments was pretty impressive, too.

Sword Art Online: Hollow Realization is scheduled to reach the UK in autumn 2016, on PlayStation 4 and PS Vita.

The “Tales of” series (each game has a different suffix) may be the longest-running videogame franchise you’ve never heard of. Its debut entry, Tales of Phantasia, arrived way back in 1995. Most of the Tales of games have made it to the UK, albeit a while after their Japanese launches, and in a pretty low-key way. But Bandai Namco seems keen to give Tales of Berseria more of a push than its predecessors.

“It’s the first Tales of game with a solo female protagonist, called Velvet Crowe,” Producer Yasuhiro Fukaya explained. “The theme of the storyline is emotion versus reason – it examines the strife between those, like Velvet, who are driven by emotion, and those who remove emotion and stick to reason.” 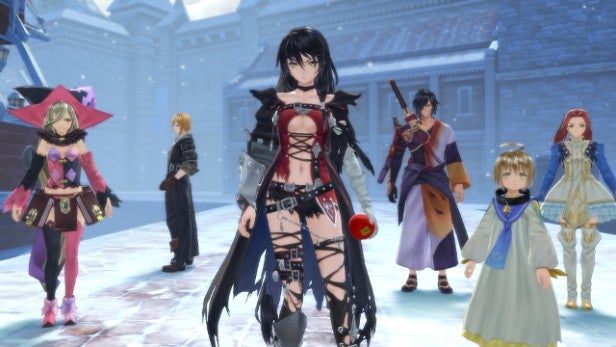 Like God Eater, it has a post-apocalyptic storyline, said Fukaya: “Three years before the game’s storyline, a scarlet moon rose, bringing Daemonblight, a weird disease that turns people into monsters.

“Velvet emerges, with a power in her left hand: it’s the key to the story, but it’s also very important in the battle system. Velvet experiences intense emotion against the person who deprived her of everything, which is what makes her run through the world. Her party has a ship and visits various locations in the game-world.”

Related: Star Citizen – Everything you need to know

Fukaya gave a live demo of Tales of Berseria, showing its lush visuals – something the Tales of franchise is known for. The characters are very stylised, while the environments are varied and impressive – including a city, housing a building called the Abbey, home to the Institution of Exorcists, Velvet’s main enemy.

Fukaya also explained the game’s main mechanic, which luxuriates in the very Japanese name of Enhanced Linear Motion Battle System. “It gives players greater freedom to generate combos, and it has an improved camera compared to previous Tales games. 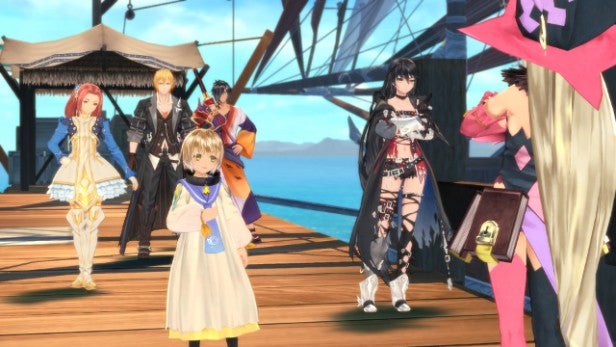 “There is a new system called Break Soul – each character has a special Break Soul effect; some are supporting effects, while others cause damage. A soul gauge lets you steal souls, and when you have more than three souls, you can execute Break Souls.”

We’ll have to wait a while for Tales of Berseria – it isn’t due to reach the UK until early 2017, on PlayStation 4 and PC. But the Tales of games have developed something of a cult following in the UK, and as Berseria is the first in the franchise built from the ground-up for current-gen consoles (2015’s Tales of Zestiria came out on the PS3 as well as the PS4), it will be eagerly awaited by JRPG enthusiasts.