Which is the Best Android in Town?

Samsung’s latest flagship smartphone is now available in shops, with all the bells and whistles that you’d expect from the South Korean manufacturer. But how does the Galaxy S5 stack up to the Android platform’s official poster boy, the Nexus 5?

With a £250 price disparity, it might seem like they’re in a different class altogether, but you might be surprised to learn how closely fought this battle is.

While few would argue that the Nexus 5 is one of the best-looking phones in a market that includes the HTC One M8 and the iPhone 5S, its simple, minimalist design is undoubtedly easier on the eye than the Galaxy S5.

There’s a certain elegance and a commendable level of restraint to LG’s and Google’s all-plastic effort. It might be low-cost, but it certainly doesn’t feel cheap.

Samsung, meanwhile, has continued with its own somewhat heavy-handed use of plastic and questionable design choices. The Galaxy S5’s dimpled soft-touch rear cover looks like something you might find on the handle of a cheap old badminton racquet. We’re astounded, too, that the company is still pushing its faux-metal surround mid-way through 2014. 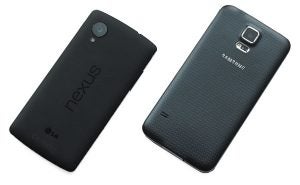 On the plus side, it feels a lot better than it looks, with a grippy and solid build. Also positive is the Samsung Galaxy S5’s IP67 certification, which means that it’s both water and dust resistant.

It’s also slimmer than the Nexus 5 by half a millimetre, though it’s a not-inconsiderable 15 grams heavier.

Ultimately, while the Nexus 5 continues to be a perfectly pleasant phone to look at and hold, the Galaxy S5 shows that we’re still waiting for Samsung’s aesthetic efforts to match the excellent work it puts in elsewhere. 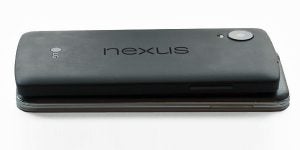 The Nexus 5 really grabbed our attention upon release for offering a top-notch 4.95-inch display for a mid-range price. It continues to impress today, thanks to its 1920 x 1080 resolution and fine colour reproduction.

It also uses an IPS panel, much like the iPhone 5S, which makes for a clear picture even when viewed at an angle.

Over in the other corner, the Samsung Galaxy S5’s display is ever so slightly larger. This serves to produce a slightly less pixel-dense picture, but not to any noticeable degree. 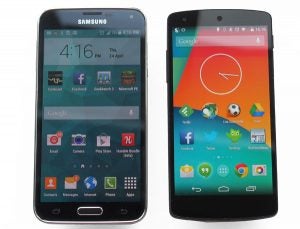 The biggest difference here is that the Galaxy S5 uses Super AMOLED technology rather than LCD. This results in considerably more vibrant colours and deeper blacks.

We’ve often criticised AMOLED technology in the past for offering unnaturally deep – and thus inaccurate – colours, but Samsung has taken huge strides forward with this in recent times. As a result, the Galaxy S5’s screen is an absolute treat.

Yes, it still uses the inferior PenTile array for arranging its sub-pixels, but the screen is so sharp and clear that you probably won’t notice.

In darker conditions in particular, the Galaxy S5’s display wipes the floor with the Nexus 5’s. 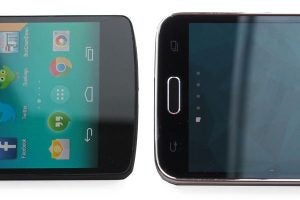 The Nexus 5 has software soft keys, the Galaxy S5 ‘real’ ones

Both phones run on Android 4.4.2 KitKat, the very latest version of Google’s mobile OS. However, the Nexus 5 still has the major advantage here.

That’s because while Google has its excellent stock Android OS, Samsung has once again layered on its intrusively busy custom TouchWiz UI. It’s an improvement over previous versions in terms of visual appeal and clarity, but it’s still well below stock Android in terms of day-to-day usability.

Samsung’s main mistake is that it seems to think choice and customisation are everything. Witness the dizzying number of toggles available in the expanded settings menu – so many that it actually negates the concept of such a ‘shortcut’ menu. 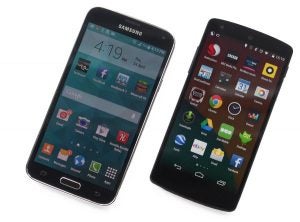 Then there’s Samsung’s habit of doubling up on apps. Again, it’s better than it was, but the Galaxy S5 still has its own app store, its own music app, and its own chat app when Google’s own versions are superior.

TouchWiz is also a bit of a resource drain, slowing down homescreen navigation in spite of the zippy hardware (more on that in a bit).

Additional features like Air View and Multi Window are neat little gimmicks, but they fail to fundamentally enhance the user experience.

While the Galaxy S5 can arguably do everything the Nexus 5 can do and more, it somehow comes out as the loser in the software round thanks to its lack of restraint and cohesion.

While the Nexus 5 is powered by the trusty Snapdragon 800 CPU, the Samsung Galaxy S5 packs the newer, faster Snapdragon 801.

But really, there’s not an awful lot in it. In fact, the 801 is very similar indeed to the 800, with the main difference being that it can be clocked a little higher. Sure enough, the Galaxy S5 is clocked at 2.5GHz to the Nexus 5’s 2.26GHz.

It’s certainly an advantage, but hardly a resounding one. 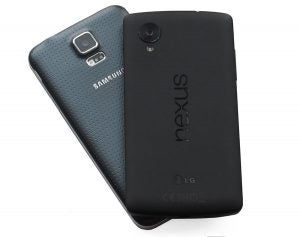 Elsewhere, the Galaxy S5’s Snapdragon 801 processor has a superior Image Signal Processor, which is one of the reasons its camera takes quicker pictures and the autofocus is snappier.

Both phones have 2GB of RAM, which is pretty much par for the course when it comes to modern high-end smartphones.

All in all, neither phone is going to be found wanting with the upcoming genertion of mobile games, 1080p video playback, or multitasking. They’re both strong performers, with the Galaxy S5 taking a slight edge.

For
the first time in this comparison, well, there really is no comparison.
The Samsung Galaxy S5’s camera is better than the Nexus 5’s in almost
every way.

On paper, the Galaxy S5 wins easily. It packs
double the number of megapixels (16 versus 8) into a larger 1/2.6-inch
image sensor, while it also features a larger f/2.2 aperture lens,
allowing it to let more light in. 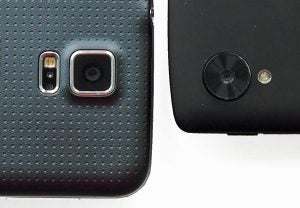 Of
course, megapixels and F-stops don’t necessarily a superior camera
make, but in the Samsung Galaxy S5’s case it happens to translate into
far superior images with a greater degree of sharpness – provided you
give them enough light, of course.

The Galaxy S5 is also extremely fast at loosing off its shots – as fast as an iPhone 5S, in our experience.

The
Nexus 5’s camera isn’t bad by any means, and it offers real hardware stabilsiation. But it’s not the top-end
component that we see elsewhere on the phone. For once, the part fits
the price.

Here’s how their photos compare: 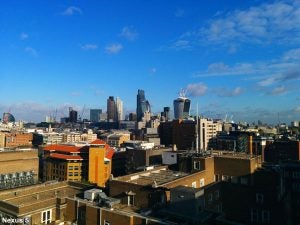 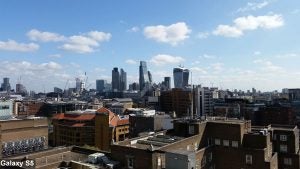 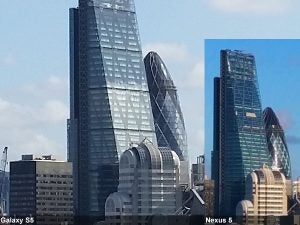 The Galaxy S5 produces much more natural-looking colours, although detail on the Nexus 5 compares pretty well despite the much lower-res sensor.

While the Samsung Galaxy S5 might have the faster processor, a larger display, and a busier UI, its battery life stretches much further.

That’s because it comes packed with a much bigger battery unit. Its 2,800 mAh capacity dwarfs that of the Nexus 5 and its 2,300 mAh equivalent.

The listed stamina figures suggest that Samsung has put this extra capacity to good use. It should last 90 hours longer in stand-by, while it should achieve around four hours more 3G talk time.

Our real life tests appear to bear this superiority out. With regular use, we struggled to get the Nexus 5 to last through a full day, whilst the Galaxy S5 could keep going for a day and a half before we needed to plug it in.

It’s also worth noting that the Samsung Galaxy S5 is one of the few modern high-end phones that allows you to access and exchange the battery. This should be of great interest to those who travel a lot with little to no access to a charge point, as well as to those who game or watch videos a lot whilst out and about.

In some technical respects, the Galaxy S5 seriously outclasses the Nexus 5. Its camera is a lot better, its processor is a little more advanced and the new Samsung OLED screen is a corker. However, the Nexus 5 is better in some less techy ways. We love the restraint of its plain design and its unadorned software, making it a better choice if you fancy saving some money.