Samsung’s Galaxy Note 10.1-inch tablet with S Pen has just come out, but it’s based on the success of a phone/tablet hybrid that came before, the original 5.3-inch Galaxy Note.

Read the original Samsung Galaxy Note phone/tablet review or check out our take on the Galaxy Note 10.1 tablet 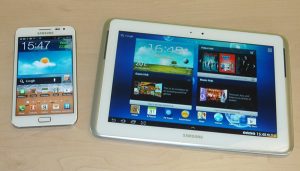 Samsung S Pen is Mightier Than your Average Stylus
“So what’s that all about, I can get a stylus for the iPad for £15” you might say. Yes you can, that’s what’s known as a capacitive stylus, and it will work on pretty much any tablet out there. What it will not generally give you is a fine tip, pressure sensitivity, or palm rejection, making it about as useful as a thinner finger for detailed photo editing, design and art.

The S Pen, on the other hand, is based on Wacom’s digitizer technology, as found in many professional Windows slates and convertible laptops, like the Lenovo ThinkPad X220 Tablet (X220T) and Samsung Series 7 Slate 700T.

The Note family is the first to introduce this on mainstream Android devices, where the only alternative was previously the inferior N-Trig solution, as found on the Lenovo ThinkPad Tablet.

Samsung S Pen is Better on the Note 10.1
While it’s true that both the Galaxy Note and Galaxy Note 10.1 use the same Wacom tech in their S Pens, the Note 10.1 is definitely the superior drawing tool, and not just for the obvious size reason either.

Since reviewing the original Note, the offset issue that many were experiencing and which we came across still hasn’t been resolved, even with the latest ICS update. This makes drawing a bit of a nightmare, especially if you’re left-handed. 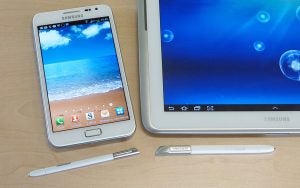 Unfortunately, Samsung still doesn’t let you calibrate the S Pen, which would immediately resolve this issue – so here’s hoping we’ll see it in an update for both stylus-carrying devices soon. The good news is that on the 10.1 there is no such offset, or rather, it’s so minimal as to be negligible.

The other reason the bigger, newer tablet offers a better experience is because Samsung has upped the 256 pressure levels on the updated Note to the maximum 1,024 the tech allows on its Note 10.1. So you can add more nuance and gradation to lines.

Then there’s the pen itself. The 10.1’s stylus itself is bigger and fatter, making it more comfy to hold. This is hardly surprising, considering the original Note’s stylus needed to fit in a sub-10mm thick, smartphone-sized device.

The Galaxy Note has the better Screen, Sometimes
The Galaxy Note ‘phone’ uses an AMOLED screen, while the Galaxy Note 10.1 tablet uses PLS, Samsung’s IPS-equivalent. In practice, the Note offers better contrast and a much higher brightness level, making it easier to use in the sunny outdoors.

Squeezing the same 1,280 x 800 resolution as its bigger brother into a 5.3in display also means it looks far sharper – or in Apple parlance, more Retina-like. The 10.1’s only quality advantage is that its colours don’t suffer the oversaturated effect AMOLED often falls prey to, and of course it gives you a larger surface for pen and touch. 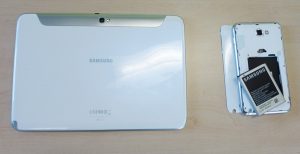 More Cores is Better, the Galaxy Note 10.1 Goes for Gold
The original Note sports a dual-core 1.4GHz processor, which was impressive for its time. However, the tablet version ramps that up significantly, not only doubling the cores with its quad-core 1.4GHz Exynos chip, but also doubling the memory to 2GB.

The Galaxy Note is Less Apple Flavoured, Uses Standard Connectivity
While both Notes give you a microSD card slot and of course headphone jack, the Note 10.1 uses a proprietary Samsung port for everything else – much like the iPad. In other words, if you want to hook it up to your telly or plug in a memory stick, you’ll need to buy a specific Samsung adapter.

The original Note, on the other hand, uses the same microUSB charging port as every other smartphone. This means the full-size USB adapter that you might have bought for your HTC or LG will work without issue. It also offers video output through the same port using MHL, which again is a common standard.

This and the fact you can swap out its battery give the pahblet a definite edge.

Samsung Galaxy Note 10.1 Is Multi-tasking Master
All this power and its bigger screen let the Note 10.1 implement a pretty significant feature: split-screen multi-tasking. Samsung calls it Multiscreen and it lets you, for example, watch a video on one half of the screen while checking mails on the other. However, it’s limited to a small number of custom apps.

Samsung’s Note 10.1 Simply Sounds Superior with Stereo Speakers
This one wasn’t hard to guess in advance as the Note is a phone-sized device while the 10.1 is more than twice as large. However, the new Note doesn’t just sound like your average tablet but is by far the best-sounding one we’ve heard, thanks to its distinct stereo speakers.

Of course, the Samsung Galaxy Note 2 is on the horizon and will probably nullify the power/performance arguments in favour of the larger tablet.

However, at around £380 right now, either Galaxy Note is a great buy. Just keep in mind that to get 3G on the 10.1 – which incidentally will also let you send texts and make calls just like the phone – you’re looking at £499, and it’s also worth keeping in mind that Jelly Bean updates for the existing devices may well change the offset issue with the Note and further integrate multi-tasking on the Note 10.1.