Recent internet murmurs have suggested we might not have to wait until ‘Holiday 2020’ to get the Surface Duo (aka the Surface Phone) in our hands, and that it might even hit shelves around the same time as the Samsung Galaxy Z Fold 2.

Considering it was announced way back in 2019 (remember 2019? that was a good year, wasn’t it) the Surface Duo – the first Surface-branded Microsoft phone – might have slipped out of many people’s thoughts. That would be completely understandable as it’s very rare an Android phone is announced a year before it’s expected release. So, let’s have a little refresher.

The Duo is a ‘foldable’ device, though unlike the Fold it doesn’t have a flexible OLED panel. Instead, it’s two separate 5.6-inch displays attached together; when you’re done you can close it up like a book, or a really tiny Surface Laptop. I’ve loved this approach and unique design since I first saw it and even the reports of, shall we say, disappointing internal specs haven’t dampened my anticipation.

See, the Duo still seems to be a 2019 phone at heart. Windows Central reports that it’ll have a Snapdragon 855 chipset, rather than the newer Snapdragon 865, completely lack NFC and 5G and come with a battery that’s far smaller than just about every Android phone I have used this year. Missing 5G didn’t seem like much in late 2019, however with 5G phones like the Moto G 5G Plus offering the tech for less than £300 it’s going to feel like an odd omission. 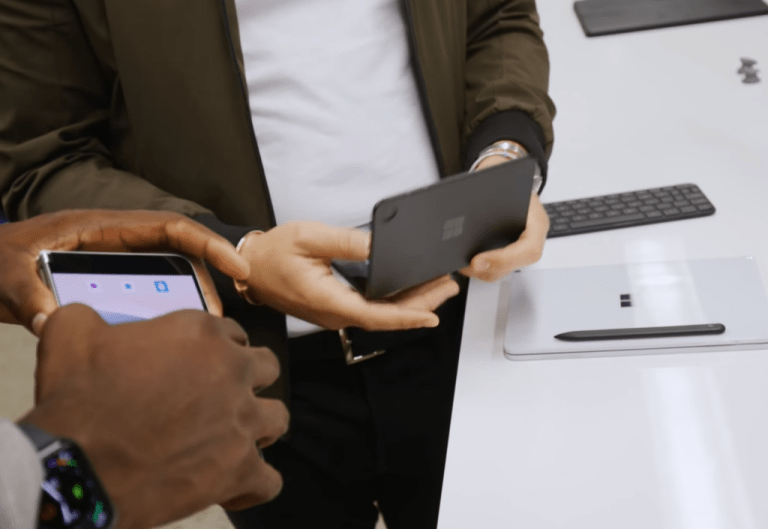 I did have hopes there might be some rethinking going on and we’d end up with a more modern Duo when it actually comes to release, however due to the way the phone was originally designed that seems unlikely now.

Yet, with all that being said, I am still eager to pick up a Surface Duo, put my SIM inside and use it every day. The unique form-factor feels like it packs the best bits of a foldable (more room, smaller overall footprint) without the issues the Galaxy Fold suffered with an ugly crease. It’s also a nice alternative to the sea of rounded slabs that make up the current smartphone offering.

My excitement for the Duo has only increased after reviewing a couple of LG’s most recent phones, which come with a snap-on secondary screen accessory. This turns the LG Velvet into what I feel is the closest currently available representation of the Duo. With the Dual Screen add-on you can use the second panel as a large keyboard, game controller and to make multitasking easier. The idea is clever, and I hope Microsoft will nail it.

The biggest issue I have with the Dual Screen is that it feels like an extra. It’s not built-in like the Duo, and is a bit bulky as a result. With it connected, the LG Velvet turns from being a thin, svelte phone to one that’s plasticky and overly thick.

It also struggles with software support, another area I hope Microsoft goes a step further with. Apps that feel like they should be built for a foldable device, like the Kindle app, are unsupported and the large keyboard is downright terrible. If Microsoft has managed to get enough developers to properly build apps to take advantage of what’s on offer then the Duo will be off to a good start.

Microsoft will have a big job selling this device to the masses, especially with the internals being plucked straight from 2019 and a price that I can’t imagine being affordable, but if they manage it then this could be the phone that finally changes the increasingly dull mobile landscape.