Firefox 29: What’s New and should you try it?

Mozilla has just released Firefox 29, which ushers in a radical redesign of its interface as well as a number of under the bonnet changes that Mozilla hopes will make the browser simpler yet more customisable. We take a closer look at what’s new and whether it’s worth trying out.

The most obvious change to the latest release of Firefox is its revamped design. Codenamed Australis, this new look has three main changes from previous versions of Firefox.

Gone is the orange menu in the top left to be replaced by a three-bar button menu on the right. Meanwhile tabs now have rounded edges and non-active tabs are made more translucent so they disappear into the background

There’s no getting passed it, the whole look is now very much akin to Google Chrome, which you can either see as a good or a bad thing. In defence of the new look, Mozilla’s VP of Firefox, Jonathan Nightingale, said “Google didn’t invent simplicity… We do lots of things differently.” Seems a fair argument to us, even if we’re not sure about the harder-to-see tabs.

Firefox designs staples that do remain are the presence of separate boxes for URLs and search – all the other major browsers have now combined these. Likewise, core navigation buttons like Back, Forward and Refresh remain in their tried and trusted positions – long-term Firefox users shouldn’t be too thrown.

As well as moving the main menu, Mozilla has also completely revamped it. Tap the new menu button and, instead of a list of word-heavy menu items with hover-activated sub menus, you get a clean and clear grid of commonly used items with big icons above them. 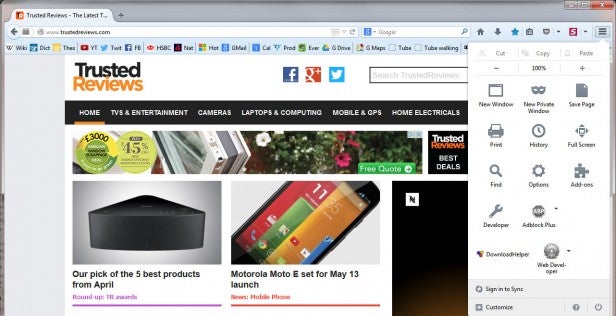 The default selection are all items you could otherwise find in the main menu of the old system, but here they’re much more prominent. Crucially they’re also much more touchscreen friendly, making Firefox 29 the most touchscreen friendly Windows browser around. Even Cut, Copy, Paste and Zoom have been given nice big prominent buttons on the menu.

Another key feature of the new menu system is its customisability. Although Firefox always had a fairly powerful set of customisation tools for tweaking the layout of features on its toolbars, Firefox 29 now brings this to the menu too.

Tap the customisation button and you can start dragging and dropping tools to and from the menu as well as the toolbars. Don’t Print much? Drag it out of the main menu. Often find yourself emailing links? Drag it into the main toolbar. 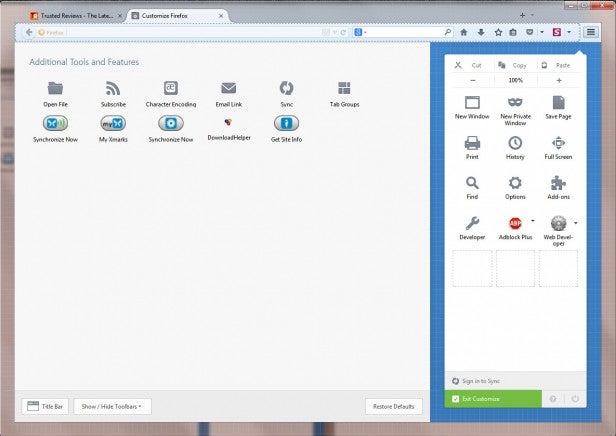 The new menu system is also compatible with other add-ons, allowing you to add buttons for your favourites right on the toolbar while putting your less used ones in the menu. The likes of Pinterest, Send to Kindle, AdBlock, FireShot and more are fully compatible.

If there’s a downside to all this it’s that if a tool isn’t in the menu you can’t access it without going into the customisation screen and dragging the button into view. Instead, you’ll either have to find the keyboard shortcut or tap Alt to bring up the old school menu.

One simple little tweak to Firefox 29 is the streamlined bookmarking tool. Tap the new star button and a page is instantly bookmarked, and there’s even a little animation to show where the bookmark has gone: into the bookmarks button next door.

It’s a small change but one that will doubtless make bookmarking pages a much speedier process for many users. 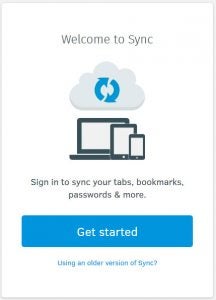 The final major addition to Firefox 29 is its new syncing system for matching up settings and bookmarks between machines.

While Firefox has had a system in place for a while it has always been rather clunky, requiring random codes instead of a username and password.

Data is synced via Mozilla’s cloud systems and Mozilla has plans to use the service for other parts of the application too.

Firefox Accounts is also coming to Firefox on Android, making for even easier cross-platform syncing.

Mozilla claims this is the fastest version of Firefox yet, with graphs to prove it, and so far it does indeed feel very nippy. Whether its tendency to clog up and crash over time has been fixed is another matter, but so far it’s doing well.

Should you give Firefox 29 a try?

All told, we think Firefox 29 is a marked improvement over previous versions. The interface is definitely cleaner and more tablet friendly, it’s easier to customise and it seems nippier too. The only thing we’re not sure about is the new tab style, but we can live with it. What’s for certain, if you haven’t tried Firefox in a little while it’s definitely worth giving this latest version a go.