Apple has just launched a new iPhone by surprise – but has the brand also fundamentally changed the smartphone market at the same stroke?

The iPhone SE 2 arrived without the usual flurry of publicity that accompanies Apple’s tech launches, which usually take the form of keynote speeches that are almost as iconic as its products. But despite the initial lack of hoopla, this certainly is not a device that will slip under the radar.

Although failing to capture the imagination at first glance (it looks near-identical to the iPhone 8), the iPhone SE 2 nonetheless has three key selling points that could seriously disrupt the smartphone market: its price, its processor, and its camera.

Firstly, its low price immediately makes it the cheapest iPhone in the range and offers an entry point to the Apple ecosystem for a far greater number of people. Apple products are notorious for being pricey; its top-spec smartphone, the iPhone 11 Pro Max, costs a sickening £1,449. In contrast. £419 is eminently reasonable for a phone of such impressive specifications, and most people will be able to afford the outlay, especially if spread over the course of a contract. Naturally, being an Apple product that price also includes goodies that don’t come in the box, including customer support and long-term software support. 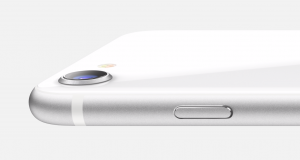 Secondly, it has a camera that’s undoubtedly going to be blessed with Apple’s expertise. We’ve always been impressed by the quality of mobile photography from Apple, naming the iPhone 11 Pro as the best camera phone, and given that the brand boasts of its new entry as “the best single-camera system ever in an iPhone”, we’re expecting great things.

Usually, photographic ability is an area where such mid-range phones fall down, unable to match the results of flagships; but encouragingly, this could well become the second phone from the past year that’s managed to pull off the trick (the Google Pixel 3a being the first). Given the centrality of photography to so many people’s lives, this has become perhaps the most crucial consideration when purchasing a smartphone. When combined with the first point this is a potential killer blow to the flagship market – but the iPhone SE 2 still has one more trick up its sleeve.

Thirdly, and most importantly, there are no compromises on the processing power. The iPhone SE 2 boasts the same chipset as the brand’s top-spec iPhone 11 Pro Max, namely the A13 Bionic. After putting it through our rigorous testing, we described it in the following glowing terms: “This is a seriously fast piece of silicone that outperforms every Android phone we’ve reviewed in benchmarks, and it feels equally as snappy in general day-to-day use.”

Just imagine that – a smartphone for able to outperform any Android phone you could care to mention, available for half or even a third of the price. This is the specification that makes the iPhone SE 2 a potentially revolutionary phone; but has it truly removed the need for flagship smartphones?

Two main factors distinguish a flagship from this new device: the photographic versatility, and the screen.

To take on the first part; the rear panels of many modern smartphones resemble a pack of paparazzi, with as many as five different cameras squeezed in. That gives a versatility that one sensor can never truly rival. Software can make up some of the shortfalls; rather than employing a depth sensor, the iPhone SE 2 will use post-processing for portrait snaps with a bokeh effect. But if you to take in more of your surroundings, there’s no replacement for an ultrawide lens. Nonetheless, it’s doubtful that this will be a complete dealbreaker for most people, given the astonishing sales success of the single-camera iPhone XR.

The display is a more complicated issue, with two sides to the story. In some ways, the iPhone SE 2’s smaller stature (with just a 4.7-inch screen) is a strength. It allows people to upgrade more naturally from older iPhone models while, crucially, being far more comfortable to use with one hand – filling a popular niche in the market that’s been neglected in recent years. Apple itself has described these dimensions as the most popular ever released for an iPhone. It’s undoubtedly good news that there’s finally a kick-ass smaller handset on the market.

On the other hand, there’s nothing that beats a big, immersive display when you’re watching videos or playing games. The experience on, say, a 6.5-inch screen with Full HD+ resolution and HDR support draws you in like nothing else; the iPhone SE 2’s diddy display with a measly 720p resolution will never be able to compete on these terms. 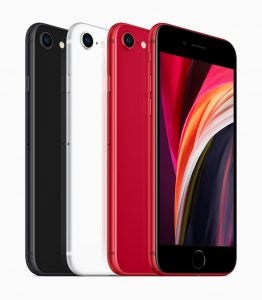 The iPhone SE 2 is available in three colours

The iPhone SE 2 is undoubtedly going to be a sales smash-hit, and it deserves to be: it has significantly raised the game for mid-range smartphones in one fell swoop. But to truly kill off the overpriced flagship market, there needs to be an option with a larger, and ideally higher resolution screen too.

Fortunately, there’s another device soon to arrive which might just do that; keep your eyes open for the upcoming Google Pixel 4a XL, which might deliver that final killer blow to the overpriced, overhyped flagship market.