Against the wishes of esteemed directors like Martin Scorsese, could smartphones soon be the default cinematic experience?

Having been in development for over a decade, and featuring Oscar-winners including Al Pacino, Robert De Niro, and Joe Pesci, the release of the gangster epic The Irishman was a highly anticipated event in most movie-goers calendars this year.

Critical reception has been unanimously positive, with reviewers seeing it as a sublime swan song for the genre, in which Martin Scorsese made his name. But before the launch, an unusual debate had taken hold; the director didn’t just ask people to watch his film, he specifically told them how to.

The reason for this is that ‘The Irishman’ was made by and for Netflix, and it had only a very limited traditional cinema release in selected countries, rather than the wide release rolled out for most films. With viewers left to their own devices (literally), Scorsese worried that they would choose the wrong one to watch it on: “I would suggest if you ever want to see one of my pictures, or most films – please, please don’t look at it on a phone, please. An iPad, a big iPad, maybe.” It didn’t take long for this request to be satirised on Twitter:

David Lynch, director of Eraserhead and The Elephant Man, has been even less diplomatic in his opinions on the matter:

But as smartphones and streaming services both become ubiquitous, are these auteurs fighting a losing battle against the tide of technology?

I’d actually argue there is room for optimism on both sides of this debate: the traditionalists can take heart from the rapturous reception of the film and the fact that most people chose to watch it on a big screen, while the smartphone-streamers can enjoy the added convenience, and look forward to evermore impressive technology on which to enjoy their movies.

To start with, it’s worth emphasising the fantastic success of The Irishman. It has earned a Certified Fresh 96% score on Rotten Tomatoes, garnered five nominations for the Golden Globes and attracted plenty of Oscar buzz, but most encouragingly of all, Netflix revealed that it’s been streamed by 26.4 million different user accounts. That doesn’t just mean that couch surfers clumsily clicked on the title by accident while looking for the next series of Orange Is The New Black: that’s the number of accounts that have watched at least 70% of the 210-minute film.

If Scorsese was worried that his movie would go unappreciated without a cinema release, left at the bottom of the Netflix Originals bargain bucket with the likes of Adam Sandler’s or Kevin James’ latest creations, that fear was unfounded. Whether released via a streaming service to a smartphone or at a prestigious picture palace, critics and audiences alike will still appreciate a good film.

But you may be wondering how many of those 26.4 million watched the film on their smartphone. Again, if Scorsese thought the majority would be watching his film on a six-inch screen, he was mistaken – and in fact, he may be pleasantly surprised with the viewership data. According to Vox, Netflix users start out watching the service on a mix of devices: 25% on TV, 40% on a laptop, 30% on a smartphone, and 5% on a tablet. Yet after six months’ experience, just 10% of Netflix users watch the content of their smartphone, with an overwhelming 70% majority choosing to watch it on the big screen. 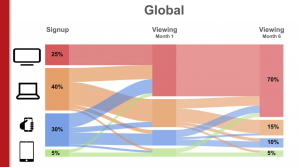 This indicates that the more people are accustomed to watching content, the more they want to watch it on a TV; in other words, Netflix might act as an evangelist for the big-screen experience rather than its nemesis. And given that more and more people own large-screen TVs, with the average screen size expected to reach 48.5-inches in 2021 according to Statista, it seems likelier that the home cinema experience will become evermore popular, rather than ceding ground to the smartphone.

But let me also lend my defence to the 10% — that minority who need to “get real”, according to Mr Lynch.

Convenience is the strongest argument in favour of using streaming services on your smartphone. Busy people who perhaps don’t have the time to sit behind a bucket of popcorn for three and a half hours can watch the film at their own pace and at a location of their choosing without having to shell out for a ticket on top of their monthly subscription. This makes films more accessible than ever before, and not only is this surely preferable to that audience not seeing the film at all, but it’s thanks to users such as these that such a prohibitively expensive film (on a $159 million budget) was ever able to financed, as established movie studios has turned it down. 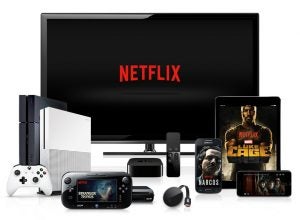 The argument of accessibility also runs deeper, to audience demographics. According to YouGov, 49% of Netflix users are below the age of 34; or in other words, they weren’t yet born when ‘Taxi Driver’ and ‘Raging Bull’ were first shown at the multiplex. If new generations, more likely to use their smartphone than older ones, is awakened to a new appreciation for film through this release, then that also seems like a victory for cinema, rather than a blow to it.

Yet as a tech website, one of the most exciting things about more people using their smartphones to watch video content is the advances in technology that such a trend could usher in. 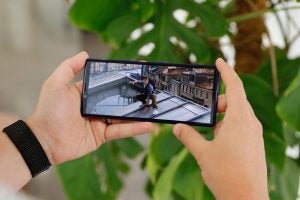 Spiderman: Far From Home trailer playing in 4K on the Sony Xperia 1

A recent phone which was distinctly marketed towards movie-watchers was the Sony Xperia 1. This device boasted a high 1644 x 3840 resolution with HDR support, on a 6.5-inch OLED screen in an unusual 21:9 aspect ratio, which was chosen for its parity with Hollywood blockbusters. Other features likely to be well-received by cinephiles include Dolby Atmos sound and the lack of an intrusive notch in the top of the screen.

Naming it Sony’s “best phone in years” in our review, we were very impressed with the vibrancy and contrast of the 4K screen etc (though admittedly the aspect ratio wasn’t ideal for all activities). If the trend for watching films on phones encourages other manufacturers to implement such impressive screen and audio specifications — which of course have spin-off benefits for gamers, music lovers, and more — then it looks like another positive trend for the market.

It would be easy to simply dismiss the evident concerns of Martin Scorsese with one of Joe Pesci’s most memorable lines from his latest film: “It is what it is”. But that would be unfair; as one of the most revered film makers of recent times, his opinions deserve our attention.

To answer the titular question, smartphones will undoubtedly have an influence on cinema over the years to come thank to their convenience, despite the fact that a majority of people clearly still prefer watching films on the big screen. But where smartphones are influential, they can still be a force for good, by attracting more people towards good films through their accessibility, and spurring greater advances in technology that have knock-on benefits.