Can Huawei’s App Gallery compete against its rivals, the App Store and the Play Store? Here we compare the three biggest app providers head-to-head.

“There’s an app for that”. Ten years since Apple’s catchy slogan made it’s way onto the airwaves, the philosophy could hardly better encapsulate the smartphone age in which we live. When you start a new hobby, learn a new skill, or find a new passion, there’s almost always a relevant app that you can quickly download to make your life that bit easier. Facing the day without your favourite everyday apps, from WhatsApp to Google Maps, might seem impossible or at least highly inconvenient – but at least in part, it’s a reality that it seems Huawei will have to overcome if it’s to succeed.

In 2019 the US government introduced legislation that came to be known as the “Huawei Android Ban“; Google was proscribed from cooperating with Huawei on the grounds of cybersecurity. Despite the misleading popular name, Huawei devices can still use an open-source version the Android operating system, but this diluted solution means that any new Huawei phone will lack Google Mobile Services (GMS), including the Play Store and all its associated apps – a crushing reality that first dawned with the launch of the Huawei Mate 30 Pro flagship phablet.

Huawei hasn’t simply given up; the brand’s answer to the problem has been to expand its own app store, named the App Gallery, by through heavy investment (to the tune of £20 million / $26 million) in order to attract prestigious developers.  Furthermore, Huawei recently announced that it would crack down on malicious apps through a strong system of checks, and that it would introduce a handy new “Quick Apps” tool that will let you interact with app without fully downloading them.

On top of that, ever since the news first broke there have been rumours that Huawei will release its own operating system altogether, currently referred to as “Harmony OS”, in what would be an even more radical departure from the mainstream Apple/Google duopoly.

But will these ambitious plans actually make any difference? With US companies primarily blocked from working with the brand, access to your favourite apps is still likely to be the major problem. On February 25 and 26, we checked and compared the twenty most popular free-to-download apps (excluding games) from the major app stores, and discovered the following results:

As you can see, while the Google Play Store and the Apple App Store share many familiar apps in common, the Huawei App Gallery has a roster that looks strikingly different (despite some favourites, like TikTok and Snapchat, making an appearance).

If you search to download some of the most popular social media apps (WhatsApp, Instagram, Facebook, Twitter), you’ll find reams of unofficial apps claiming to install, browse, or read the apps (and you can spot two of these in the App Gallery’s overall top twenty, for YouTube and Facebook). The only official app listed is Twitter; when I clicked on the icon, I was promptly redirected to the Google Play Store to download it. 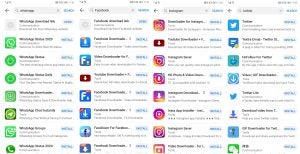 It’s been clear from when the legislation was first announced that Huawei will have a major fight on its hands just to remain relevant; and that’s a difficult position to be in, especially with the flagship Huawei P40 Pro set to be launched on March 24.

One promising sign for Huawei is that its sales have not plummeted in markets such as Russia and the Far East, where consumers are less wedded to Google’s suite of apps than in the West. Another is that there will undoubtedly be hidden backdoors and sideloading options to access your favourite apps again – a method that will appeal to the more tech savvy consumers but is still likely to remain a mystery to the mainstream user who simply wants to “get up and go” with their new smartphone.

Nevertheless, despite Huawei’s recent investment and innovations for its App Gallery, the lack of Google Mobile Services is likely to be a compromising flaw to the average consumer in the West, as demonstrated by the lack of popular crossover apps. Unless the ban is reversed, it’s likely that the brand will struggle to find network carriers and stockists, let alone a large customer base – its best hope, however faint, would appear to be seeking the reversal of the ban.