Dolby, master of home and cinema sound, introduced the Atmos sound format in 2012. While still not widely available, it has been gathering pace ever since. There are now 10 Dolby Atmos cinemas in the UK.

Godzilla is the latest film to benefit from Dolby Atmos, which provides directors with much more creative freedom in the medium that truly drives emotion – sound.

Here’s why I think you should care.

Great sound is easy to miss

The search for ever thinner and higher resolution TVs has led many of us to neglect sound. We shouldn’t. My chunky old 26-inch CRT TV was streets ahead of my current LCD in terms of sound quality so I resorted to buying a 5.1 surround sound system that cost more than the TV itself. I’ve never regretted the decision.

The tenor of a voice, the bass of a film’s score or the tension provided by a well-timed creak are all aspects that immerse us in a movie. While 3D has been force-fed to us as something that adds another dimension, in reality it is more often a distraction.

There’s another reason why many of us don’t pay as much attention to sound as we do to visual clarity. It is a lot easier to notice that a screen isn’t very sharp or that colours are off than it is to spot something slightly amiss with the sound. But great filmmakers spend as much time getting audio right as the visuals.

Many of us miss out on this. The best tablets may be great for consuming media on the go, but just consider how much is lost by those tiny speakers.

Sam Raimi, director of the Evil Dead and Spider-Man movies, explains “If we can basically hear the dialogue we think that that is all there is. There are so many more levels to the sound of a great Atmos mix. The dimensionality is incredible and so is the full experience you get with that system. You are completely immersed in the experience. It’s a great tool.”

This is why, as a film lover, I was so excited to experience Dolby’s Atmos cinema sound system. I got to watch some short demos and a full feature, Godzilla. Over the past decades Dolby brought 2.1, then 5.1, then 7.1 and eventually 9.1 to cinema audiences, but with Atmos it has totally revolutionised the way audio in film is created and produced and we’re seeing more and more films start to use the Atmos format.

As it turns out this is a very good thing.

If you have a 5.1 system at home, you’re listening to six discrete channels when watching a surround track. Channels allow sound engineers to take “sections” of audio and feed them
to a specific set of speakers. The conversation of two on-screen
characters will likely come largely from the central channel, leaving the other four non-subwoofer channels for the sound of passing cars, the rustling of leaves and other such sounds that get you immersed in the film’s environment.

Atmos differs from traditional channel systems by offering 128 audio
channels for sound engineers to tinker with. So the usual 10 channels go
to the front speaker, front right speaker, back right speaker etc. That
leaves a whopping 118 channels, known as “sound objects”, for engineers
to provide pin-point positional sound.

In an Atmos cinema speakers are arranged in a hemisphere. They not only shoot sound from the front, sides and back of the auditorium, but also from the ceiling.

Atmos allows sound engineers to position sound like never before. A demonstration of a buzzing bee had me believe it was circling my head, while a scene of a heavy shower in a rainforest provided such positional clarity that you could hear drops hitting specific leaves all around you. It’s the sort of demo that leaves you looking left and right for the location of sounds you’d swear were happening next to you. 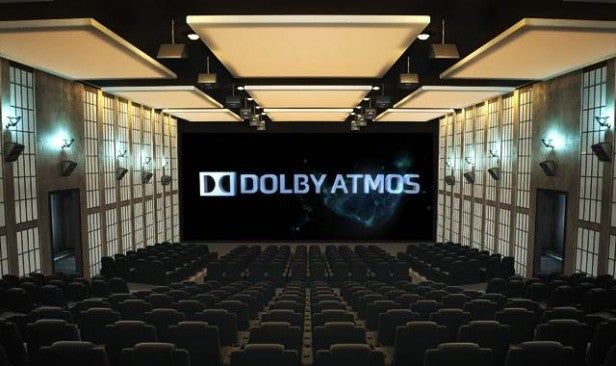 Speakers in a Dolby Atmos cinema cover the sides, front, back and ceiling

Never has the Dolby Atmos effect been more impressive than in Gareth Edwards’s Godzilla. While some viewers, particularly in Japan, are unhappy with the look of the monster there have been no complaints about its mighty roar. Hear it in Atmos and you will be blown away – you get more of a sense of the enormous scale of the beast from the roar than you do from its huge visual on-screen presence.

Eric Aadahl, the sound designer for Godzilla believes that “Dolby Atmos creates a whole new level of resolution it’s a much more immersive environment. What you hear is every bit as important as what you see.”

The amazing thing is that the immersion has little to do with the volume. Loudness is easy – clarity, precision, pitch perfect bass and detail are hard. And that’s the great thing about Godzilla’s roar in Atmos, you don’t want to cover your ears, you are just pushed back into your seat by the force of it and then you savour every morsel of one of the most iconic sounds in cinema’s history.

With more and more films using the Dolby Atmos format it is just a shame that only a handful of cinemas are set up with the ability to show them off to their full effect. If you are lucky enough to have one near you check it out, just make sure you’re watching an Atmos format movie, like the upcoming X-Men: Days of Future Past, to get the full experience.

If you want to find out where you can experience it for yourself you can check out the Dolby Atmos Locator.