Dark Souls 3 begins in the Cemetary of Ash graveyard. This is essentially a tutorial area, but don’t expect your hand to be held. Keep an eye for the red scratches on the floor, as these snippets of explanation for the game’s controls are all you’ll get.

Proceed forward and you’ll soon stumble upon your first enemy. Lock on by clicking the right thumbstick and take them out, they’re pretty easy. The best tactic it to be aggressive with your light attacks, as these enemies unleash a flurry of strikes given the chance. If you raise your shield, you might prematurely drop your guard due to zapped stamina and end up eating a frenzied attack. Once it’s dealt with, pillage the corpse for a Fading Soul – an item that rewards a small number of souls upon consumption.

Now turn right and sprint through the waterlogged chasm. It’s a dead end, but you’ll find a Soul of a Deserted Corpse – worth slightly more than a Fading Soul. Next, turn around and head back to where you came and turn right. In front of you, you will see a cracked fountain and an enticing shiny thing. Slumped against the fountain is a corpse, but it will get up and rush you when you near. Raise your shield or prepare to roll, and counter attack as soon as you avoid its lunge. That shiny thing you saw is an Ashen Estus Flask, which is used to recover FP – Dark Souls 3’s twist on mana, or magical energy. 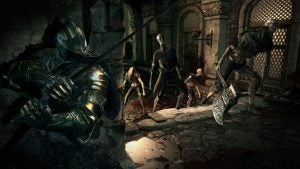 Head left and upstairs. If you’ve been reading the etchings on the floor, you will see the game wants you to use the enemy ahead to master the art of parrying. To do so, tap parry (L2/LT) just after it begins its attack animation. Follow it up with a light hit – making sure you’re not moving – to deal big damage. Continue on the path, go down the steps on the right and you’ll come up against a crossbow archer on your left. Raise your shield and approach, blocking its arrows until you’re close. If you don’t have a shield, hitting roll just as the arrow is near will avoid it. Sidestep around them for a backstab for extra cool points.

Now head back to that cracked fountain where you found the Ashen Estus Flask and there’s another opportunity to test your backstab against an enemy leaning against a wall to your left. You should now head back to where the archer was where you will notice another path to the right.

Related: Mafia 3 – What we know

The two enemies on the ground will attack when you approach. Do as the floor sign says and wield your weapon two-handed and try out your weapon skills. These more powerful attacks can be handy in different situations, depending on weapon. Once you’ve dealt with the pair of enemies, don’t go down that path just yet, but take note of it for later – there’s a powerful enemy down there who will drop some lovely Titanite, which is used for upgrading weapons – but you don’t need to worry about it now. So, head back to the archer’s presumably rotting corpse and head on, towards the light, where a wonderful mountainous vista awaits.

Head up the ramp and to your first bonfire. These are your checkpoints, but you must light them to activate them. Resting at a bonfire resets all enemies, so only rest if you need to refill your Estus Flasks. Head onwards, down the ramp and get rid of the enemy in front. Now turn right. Quickly attack the two sitting enemies here before they can react. One usually drops another Fading Soul. 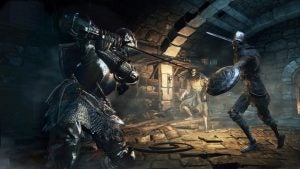 Follow the winding path down, dealing with the enemy on your way. At the bottom, there’s one shielded enemy and an archer. Be patient here. Keep your shield up and attack when the shield wielder drops its guard. Rush in and kill the archer after, but beware of falling to your death. There’s an item right there, but watch for the enemy who might drop down on your head when you close in on it. Deal with it and pick up the five Firebombs. These are handy items to have in an upcoming fight, so equip them to an item quickslot in the equipment tab menu.

Related: Everything we know about South Park: The Fractured But Whole

Head back to where you came from and take the path straight ahead of the bonfire. Walk to the edge and you will see an item and a corpse sitting on a tomb. It’s a Titanite Shard, used for strengthening weapons, and is well worth the trouble. You need to run and jump onto the tomb to grab it, so line yourself up and dash, clicking the left thumbstick at the right time to land on it. If you miss, you can get back around by circling right in the next little section. Follow the tips on the ground and deal with the enemy below by doing a plunging attack, taking off massive damage with a falling stab. Then deal with the lone archer and prepare to take on you first boss.

Walk through the archway and pull the sword from the kneeling knight, Ludex Gundyr, who will then rise up and fight. Keep tapping lock on as he stands and when it triggers start hacking away – you can get in a few early hits this way. The best tactic is to stay close and keep your shield raised, constantly circling right. Every time he misses, make him regret it by dealing two or three strikes. Halfway through, he will transform. Now back off and throw those firebombs in his face. By now, he will either be dead or very nearly dead. Repeat the guarded circling and counter attacking you used in his first form and you’ll have him down in no time.

You are now embered. In this state you have more health and you can summon NPCs and other players to help with bosses. If you die, you will become ash again – the previous version of yourself with less health and zero help. Head through the double doors. That item you see in front is a broken straight sword, so don’t get too excited, but pick it up anyway. You can always sell it. 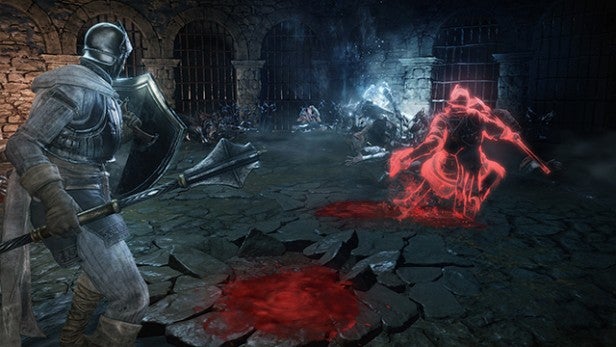 Instead of heading up the ramp, go around the edge furthest from you and deal with the two enemies there. One good tactic for shielded enemies is to get close and perform a kick – push the left stick toward the enemy and tap light attack at the same time – this will guard break and leave the enemy open to a devastating attack, just like if parried. The item at the end of this route is a Homeward Bone, used for teleporting yourself back without losing all your souls.

Now head up the main steps and take out the four enemies ahead with brutal efficiency. There’s also a guy down on the right looking out into the distance. If you walk slowly, you can sneak up on him. Kick him off the ledge. Why not. Now walk up the main stairs and just before the door head to your right. There’s a dog. Wait for it to bounce off your raised shield and counter-attack. Again, if you don’t have a shield, just keep walking forward towards the dog and it usually misses its attack, giving you an easy opportunity to kill it. You will get an Ember here, which is used to put you back in this higher health state if you die.

There’s more to do out here, but for now, head into the door at the top of the steps. This is Firelink Shrine – a place to spend your well earned souls. Find the Firekeeper NPC downstairs and pump up your stats.

Familiarise yourself with this place, as you’ll be teleporting back here often. There’s the Firekeeper, a shop, a weaponsmith, and more NPCs will appear later on as you meet more people on your travels. Once done, place the coiled sword in the ground near the Firekeeper and you’ll get a new bonfire, and the ability to teleport. Be sure to rest, and then head back outside the door you entered at the top of the steps. 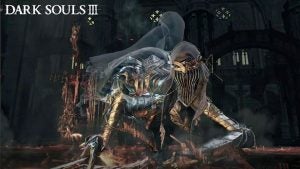 This fight is optional, but if you kill the katana wielding NPC here you get 2,000 souls, which is worth it at this early stage of the game. There are a few ways of beating him. You can have a straight up duel, taking advantage of any backstab opportunities, rolling, blocking, slashing, circling and generally using timing to get him down. Or you can use magic and Firebombs, taking him on at a distance. The best thing to do, though, is to circle him so he’s near the edge and use a mixture of sword swipes and kicks to knock him into the void. Once done, head back to Firelink, spend your points and rest at the bonfire. Now it’s time for the real challenge as you travel to the High Wall of Lothric. Good luck!