When you take up a new pursuit, you need all the gear. At least you do if you’re anything like us. Cycling is one of the most tech-heavy sports around – there’s the bike, glasses, helmet, gloves, lycra, shoes… The list goes on. And you don’t want just any old tat from Halfords, you want the best, most cutting-edge, technologically advanced gear around.

Thankfully there are plenty of crowdfunding projects to cater to your every need. From steal-proof bikes, to sunglasses that adapt to your environment, to a helmet that collapses so is easy to carry with you wherever you go, these start-ups have thought of everything. Let’s take a look at what’s on offer. 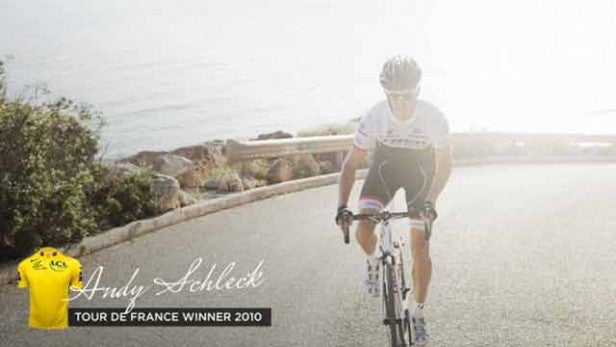 You’re cycling along on a nice sunny day when you enter a dark tunnel. You don’t want to stop and take off your sunglasses, but at the same time, you’d quite like to see where you’re going. What do you do? It’s not a problem with these sunglasses.

They’re the fastest tint changing pair in the world – the lens changes from clear to dark (and vice-versa) in 0.1 seconds. In other words, pretty much immediately. You can set the threshold at which they tint too, so no matter what your level of eyesight, you’ll always have a clear view of the road ahead.

The nose and temple pads are adjustable, so will even fit big heads, and the arms and lenses come in the colour of your choosing. There’s even a prescription add-on for wearers of normal glasses. 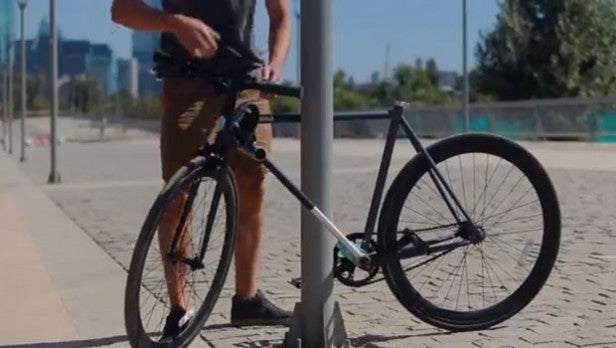 As anyone who’s ever had their bike stolen will tell you, at the time, it feels like the worst thing in the world. This bike is completely steal-proof, as part of the frame doubles as a lock. Part of the frame opens up. Take the seat tube out and slot it into the gap, then clip it around whatever you want to lock it to – a lamppost, say.

To steal it, someone would have to cut through the frame, leaving them with an unusable bike to try and cycle home on.

No one can steal your saddle either, as it’s part of the locking mechanism. And the wheels are secured with special nuts. A real shot in the eye for thieves everywhere. 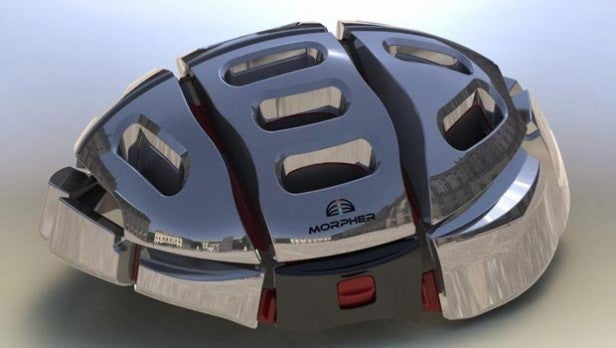 Cycle hire schemes like the Boris Bikes are a great idea, but the downside is hardly anyone wears a helmet. It’s easy to see why: would you want to carry one around with you all day? You would if it’s a Morpher.

It folds down to fit in any laptop sleeve or small bag, then folds out to offer the same protection as a standard helmet.

It’s been showered with praise, winning the Popular Science Magazine Invention of the Year 2014 and the Edison Gold Innovation Award 2015. If it makes cycling in the city safer, it deserves all the awards under the sun. 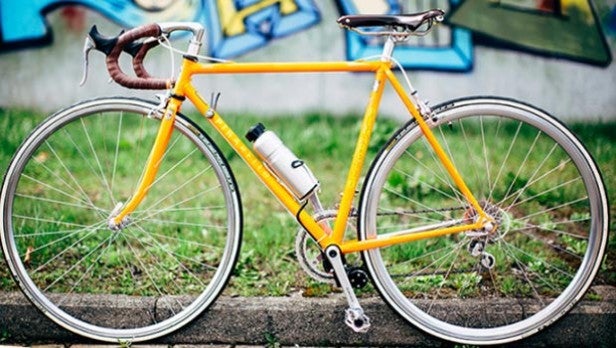 We could all do with a helping hand now and again. If you don’t want to replace your existing ride with an electric model, you might want to consider add-e. It turns any bike into an electric bike in seconds.

Just mount the drive unit and attach the battery (which is designed to look like a water bottle). Switch it on, and the drive unit kicks in, propelling you along as soon as you start pedalling. The battery lasts 50km (31 miles), which should be enough to get you to work and back.

It weighs just 2kg, making your ride much lighter than most e-bikes. It’s also waterproof, which will be handy come those wet November mornings. 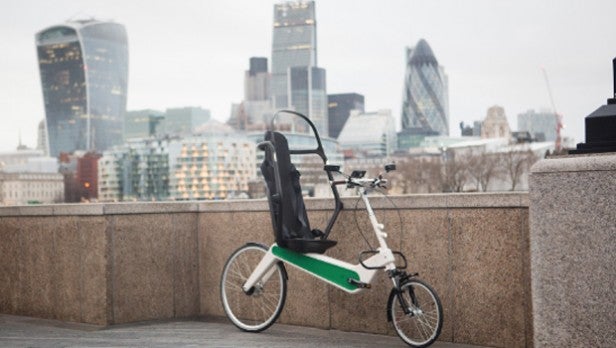 This is the first bike to feature a seatbelt. Seriously. It also has a safety cell, inspired by the roll cage in racing cars. Strap yourself in, then if a car brushes up against you, it should just push you away a little, instead of crushing you under its wheels. At least, that’s the hope.

It also has front and rear lights that come as soon as you start pedalling, making sure that you’ll always be seen. You don’t have to take your hands off the handles to signal that you’re turning, either – it’s got indicators! It also has hazard flashers, brake lights, rear-view mirrors and even a car horn.

It’s basically a hybrid between a bike and a car. Which has got to be safer than a regular two-wheeler. It’s powered by a Shimano 250-watt electric motor with a range of between 50 and 80 miles. This will assist you up to 15.5mph, in line with EU legislation.

Unfortuntately, the team behind the Babel Bike cut short its campaign, but they’re not ruling out getting it out on the roads some time in the future. 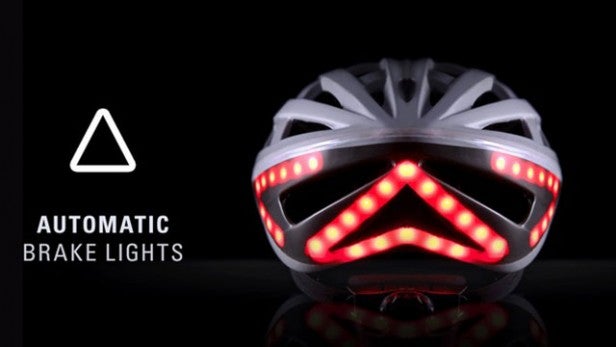 Designed with night time riders in mind, Lumos is a bicycle helmet that should improve your visibility by adding the same brake lights and indicators that motorists have.

Using a wireless remote that attaches to your handlebars, a press of a button activates the indicators with the brake light turning on automatically thanks to the built-in accelerometer that recognises when you’ve slowed down. Additionally, the Lumos is fitted with a front light for an added level of visibility.

Powering the helmet is a rechargeable battery, which can be powered up via USB. One charge should get through you a half an hour bike ride a day. The water-resistant design means it suitable for riding through the rain and comes with a standard hear-protector.

The good news is that Lumos has passed its funding goal and is shipping next year. 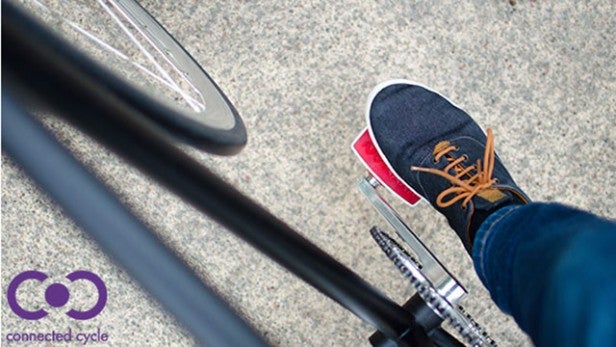 Aiming to reduce bike theft, Connected Cycle has been working on a pedal that should fit most bikes and syncs to your smartphone, letting you know exactly where it is and when it’s been moved. If you’re thinking you could just simply yank off the pedals, think again – only the owner will have the special coded key to remove them.

Working with existing cycling apps, it can also help you monitor cycling activity such as speed, route, incline and calories burned. When it comes to charging, all you need to do is keep pedalling, as it’s all powered by kinetic energy.

Connected Cycle secured its funding to get the pedal up and running and should begin popping up in a city near you soon. 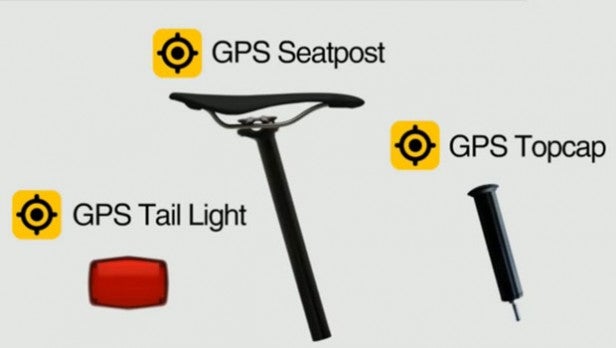 Even with all the locks in the world, no bike is completely safe from theft. (Well, apart from maybe the Yerka mentioned earlier.) Bike Hawk is a GPS tracker that tells you exactly where your ride is, should someone make off with it.

As soon as your bike is moved, Bike Hawk uploads its location, and alerts you by email, a notification through the app, and text message. Fire up the app or your browser, and you can track your bike, and hopefully find it.

You can also geofence areas using the app, and set up notifications for when your bike enters or leaves a certain area. But it’s not all about safety, it’s also a fitness tracker, monitoring your speed, route, distance, elevation and how long you’ve been riding for.

It also fits to the top cap, seatpost or tail light, and is completely inconspicuous, so thieves won’t know to take it off.

Have you seen a great piece of crowdfunded cycling tech we’ve missed? Let us know in the comments section below.