Microsoft’s voice assistant Cortana is coming to Windows 10. Here’s what you’re going to be able to do with it.

Earlier this year it was announced that Cortana would be making its debut on PCs and tablets like the Microsoft Surface Pro 3. On 29 July 2015, it will launch on Windows 10 in the UK, US, China, France, Italy, Germany and Spain.

With just as much sass as Apple’s Siri, she – yes, Microsoft refers to Cortana as ‘she’ – will change the way we use Windows. At least, that’s what Microsoft hopes.

But what does Cortana coming to Windows 10 actually mean for you? Here’s where the personal assistant is going to lend a helping hand.

Related: Here are the 9 new Windows 10 features you need to try first

Brings voice control to the desktop

At the risk of stating the
obvious, one thing that Cortana will bring to Windows 10 is voice
control. “Hey Cortana” will fire up the friendly assistant, which is
integrated into the Start menu.

While Cortana uses a Bing-powered search database to provide answers to your questions, she does a lot more, arguably more than rival voice assistants Siri and Google Now.

Cortana gets to know you and helps you get things done, learning your preferences and making recommendations. As with the mobile version, Cortana’s Notebook is home to everything she knows about you, just as a real-life assistant’s notebook would be. Opening this up will show exactly what Cortana knows, from frequent locations, to what time you get up in the morning.

Of course, if you’re not into voice controls, or you’re in a place where talking to your computer simply isn’t practical, then you can type your commands instead.

Related: Windows 10 vs Windows 8 – Should you upgrade? 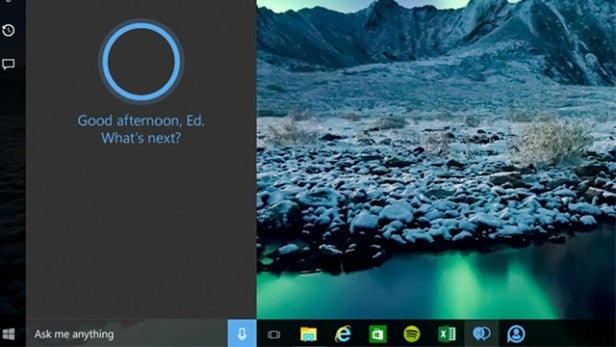 As with all the
latest Microsoft software, the idea is that Cortana syncs up via the
cloud for a seamless experience across all your Microsoft products.

Windows phone owners who have Cortana set up on their phone will find that their settings are automatically ported across to their PC when they sign in using their Microsoft ID. Cortana then automatically adjusts according to the device you’re on. She knows that if you’re asking something on mobile, you’re going to be brief, while on PC you’re more likely to be working for sustained periods of time.

Cortana is also made to work seamlessly with all your Microsoft software, so if you tell her to “Call Michael”, she’ll automatically put a call in using Skype.

As you’d expect, you can ask Cortana to carry out all sorts of functions in your other Windows 10 programmes, like set up reminders and add things to the calendar, take notes in Notepad, check directions in Bing Maps and play music in the new Music app. 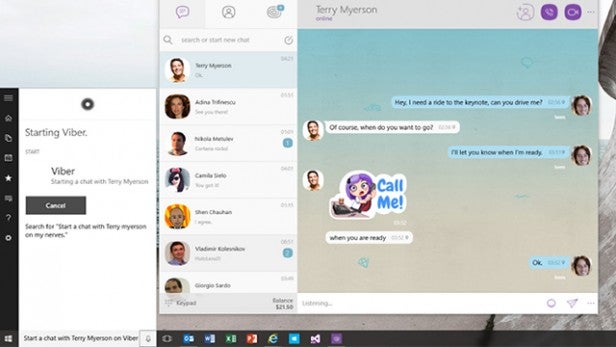 Link up with your favourite apps

Universal
Windows apps can integrate with Cortana for an even smoother user
experience, with both Uber and Viber already confirmed. This means that
you can perform app functions through Cortana without even needing to
open up the app.

For example, if you’ve previously used Viber to send a message to a friend, you could use Cortana to say “send a message to Michael telling him I’m running late using Viber”. Cortana would then take care of this before asking you to confirm before sending, saving you valuable time and preventing you from turning up even later. 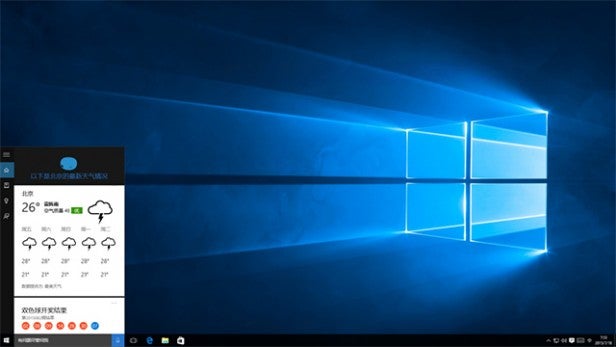 Tailored to where you live

Cortana is tailored to reflect the
local language and customs, which is why it isn’t available for all
markets directly from launch. Each market has its own local team of
writers, editors, programmers and voice talent.

The clever voice
recognition software is trained not only to recognise local speech
patterns but also more subtle differences, such as irony, sarcasm and even the famous British self-deprecating humour.

Microsoft has carried out research into what kind of voice each market wants to hear, with UK users apparently favouring a voice that sounds like the ‘English Rose’.

But it’s not just differences in language that Cortana has to deal with. Local customs, festivals and weather are taken into account, giving users the information that they require for their region. For example, in China, Cortana gives air quality readings as part of the weather report, something that’s vitally important given that its cities have such high levels of air pollution.

Give your PC some personality

Like Apple’s Siri, Cortana has her own personality and is no stranger to a bit of fun – she’ll sing you a song or tell you a joke if you ask.

Cortana was designed to reflect a real-life personal assistant, and was named after the fictional AI character in the Microsoft-published Halo videogame series. The original US Windows Phone version of Cortana is even voiced by Jen Taylor, who also provided the voice talent in the games.

As such, Cortana contains plenty of easter eggs related to the game’s protagonist Master Chief. She’s also armed with quips about Microsoft CEOs.

Cortana even has a wisecrack ready if you ask her about Microsoft’s former Office Assistant ‘Clippy’ – the irritating and inexplicably unhelpful little sod of a paperclip who was thankfully killed off some years ago.