When it came to following up its popular and cheap media streaming USB stick, the Chromecast, few expected Google to do what it did.

Let’s take a closer look at how that’s the case.

They look similar, but not identical

Both devices are small, round and fairly flat. They also both have the same Chrome logo etched onto their surface.

But there are differences. The Chromecast 2 has a shinier finish, whereas the Chromecast Audio has a distinctive vinyl-like grooved finish. 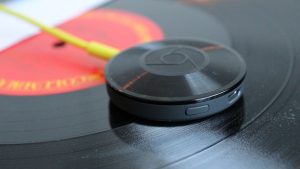 Another differing design feature is what appears to be a loop on the Chromecast 2, but which is actually a fixed HDMI cable through which you connect the device to your TV. The Chromecast Audio lacks such a feature, for obvious reasons.

What it does have is a status LED that shines white when everything’s normal, and orange when there are connection issues.

The Chromecast 2 is predominantly concerned with streaming content to your TV. Once plugged in, it aids the transition of video, photo, web, music, and even some gaming content from your phone to your television set.

The Chromecast Audio hooks into pretty much any hi-fi set-up, and so is entirely concerned with streaming music to said amplification devices.

To that end it boasts an AKM AK4430 DAC (digital-to-analogue converter) that supports Hi-Res Audio up to 24-bit/96KHz. Tidal users should be pricking their ears up right about now.

It’s worth noting that you can send video content to both devices in a similar way, but of course the Chromecast Audio will only output the sound while the video plays on your phone or laptop. That’s handy for playing YouTube music video content, and the like.

However, we found that the Chromecast Audio struggles a bit in getting that content started, with delays of a second or two. With the Chromecast 2, understandably, it’s a lot snappier, with the added benefit of outputting the video element on a larger screen.

We only mention this because it is a rare area in which the two can be compared directly, and as such it’s a small indicator that the Chromecast 2 is arguably the more capable and flexible device. 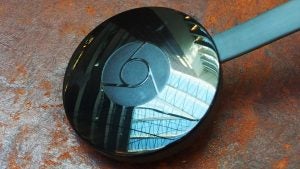 Given that these two Chromecasts are plugging into completely different types of devices, it should come as no surprise to learn that the nature of their connectivity also differs.

The Chromecast 2 hooks up to one of your TV’s HDMI ports, whilst it utilises a spare USB connection for power purposes.

Meanwhile the Chromecast Audio has a 3.5mm jack socket, which enables you to hook up to a portable speaker, soundbar, AV receiver, hi-fi system or even your TV through a stereo analogue input. This port also doubles as a S/PDIF optical output, so for high-end or older hi-fi systems and AV setups you have the option of an optical connection or a 3.5mm-to-RCA cable.

Power is handled through a micro USB port, and the Chromecast Audio comes supplied with an appropriate mains adaptor. You also get a 3.5mm-3.5mm stereo cable in the box.

Both devices make use of 2.4/5GHz Wi-Fi, too. Naturally this is necessary with the Chromecast 2 in order to stream 1080p video content (4K isn’t supported, unfortunately), and the addition of 5GHz Wi-Fi in particular helps improve streaming quality and stability over the original Chromecast.

However, this Wi-Fi connectivity also helps out a lot in the case of the Chromecast Audio. It means you can stream high quality audio without having to worry about your phone or laptop’s range to the device, as you might with a purely Bluetooth-driven alternative.

It will also open up the possibility of multi-room functionality using multiple Chromecast Audios at some point in the future. At the very least, this promising feature has the potential of providing an affordable alternative to a full Sonos setup. 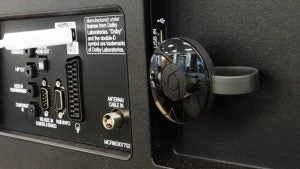 We found both Chromecast devices to be incredibly easy to set up.

The Chromecast 2 process is identical to that of the original Chromecast. Just attach the power cable and install the Chromecast app on your smartphone, tablet or laptop.

All you need to do then is power up the app and follow the instructions to connect the Chromecast to your Wi-Fi network and pair it with your device.

The Chromecast Audio is similarly easy to set up. It’s a three-step process that involves plugging it into the mains, connecting it to an amplification device, and booting up the Chromecast app.

During the set-up, the Chromecast app will ask you to listen out for a sound to indicated that the Audio is properly connected. All of this took us less than ten minutes in total.

Although the two Chromecasts plug into very different devices, their approach to software is very similar.

In fact, they feed off exactly the same Chromecast app, which helps set the device up and pulls content from compatible apps (such as Google Play Music, Netflix, Spotify, and YouTube) into one easy-to-manage UI.

You can also use the Chromecast app to browse for compatible services. It’s worth noting a couple of major omissions on this front.

The Chromecast Audio doesn’t escape censure here though: there’s no native support for Apple Music. Having said that, if you’re looking to buy a Google streaming device, the odds are you’ll be using Google Play Music or Spotify anyway. Though, Apple’s streaming service is of course now available in beta for Android.

Both the Chromecast 2 and the Chromecast Audio cost £30 from the Google Play Store, so for most people it really will be a straight choice based on their specific streaming needs. 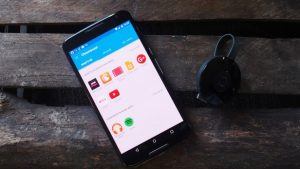 It’s impossible to offer a verdict on which of the Chromecast 2 and Chromecast Audio is better. They might look similar, cost the same, and perform the same basic task – streaming media – but they’re otherwise very different.

What we will say is that the Chromecast 2 is the more flexible tool. It can be used to stream videos, photos, and music, while the Chromecast Audio is for music fans only.

Of course, only the Chromecast 2 can’t be plugged directly into your hi-fi system, almost regardles of its age or quality. That’s the whole point of the Chromecast Audio.

So, the question to ask yourself is: what do you want to stream, and to where? Depending on the answer, Google has you well covered.