Sport and technology has enjoyed a long and illustrious relationship. Especially in the world of athletics. With the recent surge in fitness trackers and wearables that promise to correct your running form or monitor your heart rate to tell you how hard you’ve been working out, the tools to train like an elite athlete are no longer out of reach for the amateur runner, cyclist or swimmer.

Recently, I was fortunate enough to sit down with former World and European 110m hurdles champion Colin Jackson and gold-winning Olympian Dame Kelly Holmes to talk about the role that fitness technology plays on and off the track including the rise of the wearable.

When I mention the word technology and the memories it conjures up for two athletes that trained in a pre-smartphone world, I’m met with a smile. “We didn’t have smaller phones for starters” laughs Holmes. It was tape recorders and things like that. You didn’t really have the internet. Well, it wasn’t wireless like it is now.  My coach would have a watch and stick his hands around my throat to check when my heart rate came down and then go again. It was as simple as that.” 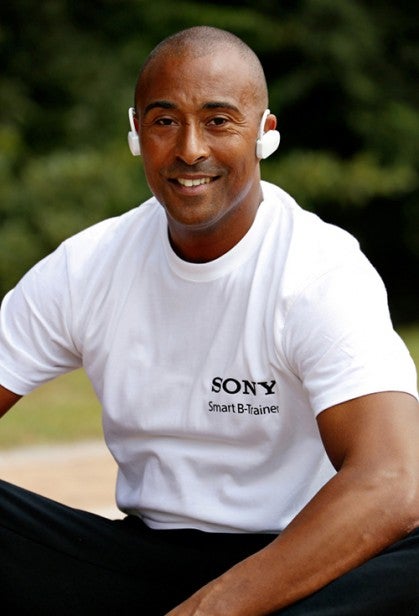 Jackson similarly has vivid memories of those times putting in the hours on the track, “I remember the first time we used to train with Sony Walkmans. With the cassette players you recorded off the radio on a Sunday night to get the Chart Show. I come from that era! I remember when they went from the Walkman to the CD and then to the Minidisc. It was brilliant. Then we finally went down to MP3 player.

Athletes did begin to use music as a motivator as the technology became smaller and then attitudes change. Now we’re at a point where athletes can video and analyse performance and get the information to the coaches miles away so to see the technical stuff. Some of the slow motion stuff you can do with camera these days which then you download is phenomenal.”

That was the past, but with Holmes and Jackson having both shared their expertise with the next generation of Team GB hopefuls, I wanted to know how technology is filtering into the modern athlete’s regime. “They will use tech to their max, says Jackson. “If they really believe in something they will fit it in and they will work with it. If they don’t believe in it, they won’t.

People are paying a huge amount of money to sports men and women to endorse products. Unless they are getting a benefit from them, it doesn’t matter how much money you’re paying them, they’re not interested. Simple as that. i can honestly say,

Jackson also believes that the ability to prevent injury is where the development in the technology is really proving its worth for athletes today, “For sprinters, impact plays a big part in picking up injuries. The reason people get injuries on their shin for instance is because they are turning on impact. So what they’d do is create something to go into the shoe to keep the foot in line so when they do turn they don’t get the awkwardness, which creates the stress. It’s these type of things that technology has helped eliminate those type of injuries, which is brilliant.

I always marvel at what’s being achieved with technology. I turned to my coach once and said, where would I be with all of this? and he always go to me, injured. Which is true because I was always slightly obsessed with things so i would have always pushed the limits. If you came to me with new gadget and said it could do all of those things, I would be like, really? Show me. I need to know and see the practical side of things. I embraced tech right from the start.”

Wearables with a lot of heart

Holmes believes the ability to closely heart rate is of a great benefit to athletes today, “Elite sports people will use heart rate tracking for knowing their limit, whether they’ve pushed themselves to the limit. More importantly, they use it for recovery. If you don’t recover enough, you’re not ready for the the next one. On recovery days your coach will tell you to go for an easy run some people still go hard and they’ve not recovered for the next track day. Now athletes have the tools at their disposal to do that themselves.” 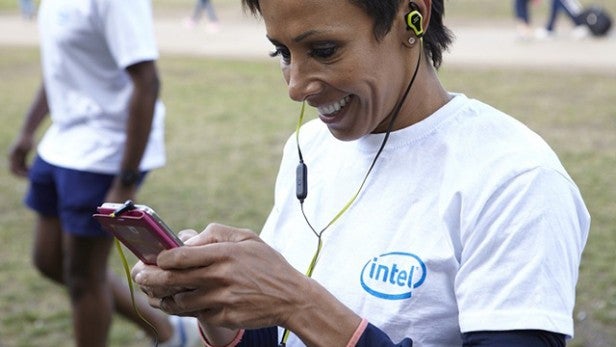 Wearable technology is fast becoming big business for companies like Apple,
Samsung and Google. Athletes are taking full advantage of it and in the most recent Winter Olympics, there was an increase in the use of shoe inserts and sensors to track performance during the competition.

Can we expect to see a greater use of wearables during events? Jackson feel it’s inevitable, “I think it will because people are
obsessed with statistics says Jackson. Even top sports men and women are
obsessed even for improving in fractions. I remember we used to have a
start machine that use to set us off and time us for 30 metres for
example. We wanted to get 100 or 200th of a second faster. There’s always been that interest
in improvement using technology. The importance is that people want
instant feedback. You don’t want feedback in 20 minutes time.”

Holmes agrees the presence of wearable technology will only grow and has no doubts that it will be well regulated by the IAAF (International Athletics Association Federation) to avoid a situation where it’s giving some athletes an unfair advantage, “If you take swimming
for example, when they changed from the full body suits to normal
costumes because of the technological advances and the buoyancy it
offered sealing the pockets of air in. They were becoming an aid
basically. 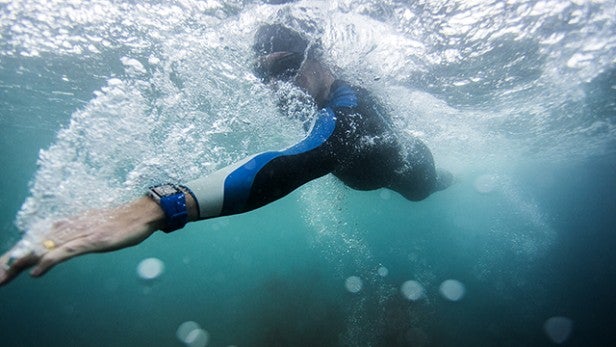 If you look at the Paralympics, they have had questionable
things about the length of artificial legs. One Paralyimpian is complaining that another
athlete has got an advantage and both have got false legs. There’s
got to be real stipulations hasn’t there? Because how do you know which
one is better? So technology, while it’s great, you have to take the
time to assess what is good or bad. That’s the only example I can give
where there is a discrepancies over the length over a blade. How do you
know who’s getting the advantage?

In athletics where there is such a wide range of disciplines,
they will look at everything. Like the pole in pole vaulting, can they
put a sensor in that. Shoes, do they put the tech in those? There’s a
lot of things you’d look at and check that it is still you performing.”

Jackson believes that support for wearable tech will be there in abundance and it’s already happening, “As a
governing body it’s very much about embracing it. They use it to improve
the sport. I guess it’s about improving the ‘watchability’ of an event.
We want the consumer to have as much statistics that they can have access to.” 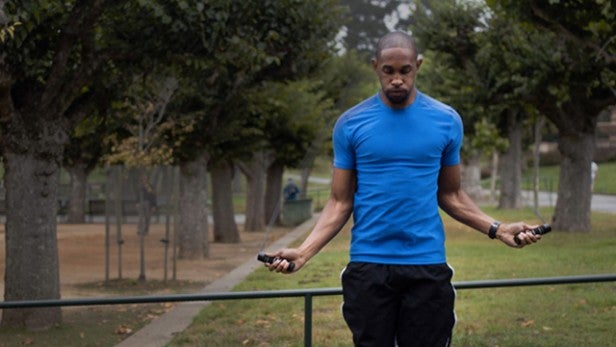 The data that matters

But what about someone who has no interest in being the next Mo Farah or Chris Hoy, and simply just wants to get fitter? I wanted to know out of all the data that fitness trackers like the Fitbit Surge or the Apple Watch provides, what biometric data is really the most important to monitor? “For me “, says Holmes. For the average person, those are there key things. It’s quick information and it’s the ones that should be valued the most.”

Jackson agrees that heart rate monitoring is key for users, “The thing about age and recovery particularly, is that for people to perform better, you need to take more recovery instead of pushing yourself and risking an injury. The ability to be able to check resting heart rate or look down at your phone and see that information, is so valuable.”

Holmes does believe you shouldn’t get too caught up in the tracking, “I definitely think you can get obsessed with it. If you’ve got a watch with heart rate built in you can become obsessed with that watch. For beginners, it’s quite a nice tool because it’s about how to react to different situations. You need that baseline. If I ran 10k and I’m  stopping and starting throughout, that’s my baseline. Next time I do a 10k run, I want to keep my heart rate steadier and not erratic. Some people need to control that heart rate and not go full pelt at the beginning. Even though people start getting very technical, it’s good to have it as a baseline.

So would the technology and hardware that’s available for athletes now have made a difference to two of the finest athletes Great Britain has ever produced? “Monitoring myself would have been a lot better because I was always led by my coach”, says Holmes. I had so many injury problems and health problems. If I had the tools that are out now for monitoring on a regular basis I could have prevented some of those. 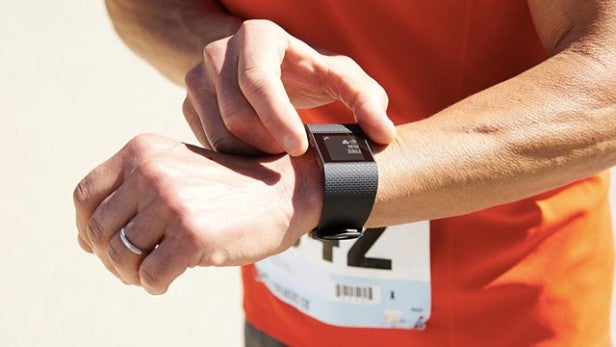 Even something like trainers, when people tell you it’s not just trainers. They make you super pronate, pronate and so on. I didn’t know that until i got injured. Then someone says you run one pair of trainers for four years and then switch to another pair that aren’t conducive to your body form and that’s why you got injured. It’s only when you make mistake that you realise it. Similarly, if I had a heart rate monitor and I had glandular fever I’d be able to see that my heart rate was so high in the morning, instead of feeling a bit rubbish, I would have noticed that my heart rate was so high and I had an infection.”

Jackson’s response was a much simpler one, “Anything that made things convenient would have been helpful. Whether that’s a watch to help me monitor performance or something more portable than a cassette or CD player!”

Colin Jackson was speaking at the launch of the Sony Smart B-Trainer sports headphones.  Dame Kelly Holmes was speaking on behalf of Intel at its #IntelPB event in association with the SMS Audio Biosport headphones.