The Canon EOS 5DS and 5DS R are the highest-resolution full-frame DSLRs we’ve ever seen. At 50.6 megapixels a piece, their sensors are capable of rendering incredible detail.

They make the old 22.3-megapixel Canon EOS 5D Mark III look positively low on pixel count. However, as we’re going to find out, you shouldn’t place too much emphasis on pure resolution.

The Canon EOS 5DS and 5DS R are fantastic in their own right, but they’re far from wholesale replacements for the trusty old Canon 5D Mark III.

A new top-end Canon DSLR not totally obsessed with shooting speed has been a long time coming. The Canon EOS 5D Mark III has been around since 2012, which would seem like a lifetime in just about any area of technology.

The Canon EOS 5DS and 5DS R were announced on the same day, 5 February 2015. They are to top-up Canon’s most expensive full-frame model line-up for 2015, although there are rumours that an outright replacement of the 5D Mark III will appear later in the year.

To re-iterate: the Canon EOS 5DS and 5DS R are cameras with specific aims, not general ones like the 5D Mark III. We’ll cover this in more depth later.

All three cameras use the same frame. It’s a fairly high-end magnesium alloy shell with outer armour designed to let you shoot in all sorts of conditions.

While the dimensions of 152.0 x 116.4 x 76.4mm are shared by the three cameras, Canon has made some very slight tweaks. Left hand grip of the newer models has been altered, with an extra contoured lip at its edge to improve ergonomics a bit. The newer cameras are also slightly lighter.

For the most part, though, all three cameras should feel near-identical to hold. That is no bad thing.

They all offer weatherproofing too. This is largely supplied by the rubber seals used in the flaps that cover the sockets on the sides of these cameras. 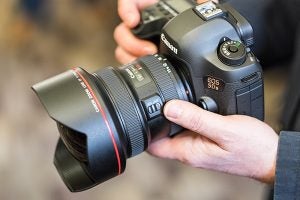 With virtually identical shells, it’s predictable that the 5D Mark III, 5DS and 5DS R all have roughly the same control layout. They use two main control dials, one on the top plate and one on the back.

The main mode dial sits on the left hand-side of the top plate as there’s a chunky secondary LCD screen on the right side – a common arrangement in top-end DSLRs like these. The second LCD gives you a quick view of things like battery life, remaining card space and shooting parameters.

Not changing design or handling is not a biggie, but it is perhaps a shade surprisingly that the 5DS and 5DS R use the same class of display as the 5D Mark III. They all have totally fixed screens that are 3.2 inches across and 1,040k dot resolution.

While this is lower-res than the vast majority of phones, it’s till about as sharp as camera screens get at this point. As is common among top-end cameras, there’s no tilting or articulation to the display. It seems this is seen as a bit too fluffy for cameras costing several thousand pounds. However, the heavier a camera becomes the less likely you are to want to get too dynamic about where you shoot from anyway.

Still, we liked the tilt option of the full-frame Nikon D750. 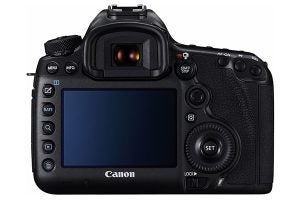 Canon has made some alterations to the internal design of the viewfinder, though. It’s nothing that will actually affect the feel of shooting with the 5DS and 5DS R, but the newly tweaked mirror mechanism reduces any tiny vibrations caused. This is seen as doubly important in the new models as their high sensor resolution will be all the more picky about any little issues in this area.

All three cameras have pentaprism viewfinders, the kind generally only found in seriously expensive cameras. They’re brighter and clearer than the pentamirror type found elsewhere.

Canon does not have a great track record of adding wireless connectivity to its cameras as standard. The Canon EOS 5D Mark III does not have Wi-Fi for NFC, but both the EOS 5DS and 5DS R have these connections. Finally.

This will let you transfer photos without spending an extra stack of cash on a wireless transmitter, and offer remote control of the shutter.

There’s one other change too. Both newer cameras have a USB 3.0 port, which will make photo transfers much quicker. While a fairly predictable upgrade, it’s a useful one as 50-megapixel RAW files will be huge. 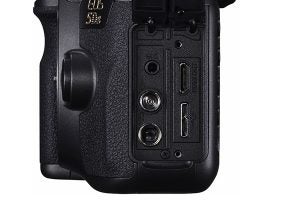 The bottom-right connection is a microUSB 3.0 port

Here we have the biggie: the sensor. The Canon EOS 5DS and 5DS R are much, much higher-resolution than both the Canon EOS 5D Mark III and the newer Nikon D810. That’s Nikon’s top model.

Where the 5D Mark III has a 24.2-megapixel sensor, the two newer models have 50.6-megapixel sensors. Shots taken with good lighting at low ISO settings will offer a staggering amount of detail.

However, it’s not an entirely positive change. Both cameras have a full-frame sensor, meaning that the photosites of the 5DS and 5DS R are much, much smaller than those of the Canon EOS 5D Mark III. You get 6.25 micron sensor pixels in the older camera, and just 4.14 micron pixels in the new ones.

Canon doesn’t even try to pretend that performance will be the same when those sensor pixels are stretched with poor lighting conditions and high ISO settings. This is pretty clear when we look at their respective ISO ranges. 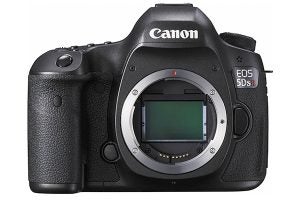 The standard ISO range of the older Canon EOS 5D Mark III goes up to 25,600 while there are ‘non recommended’ 51,200 and 102,400 modes for when high sensitivity is paramount. Like the Nikon D810, the 5D MKIII is a superb low-light performer, letting you shoot handheld even at dusk or night without ending up with blurry or terribly noisy results.

The Canon EOS 5DS and 5DS R are nowhere near as capable in lower light, despite being three years ahead. Their upper standard ISO range takes a huge dive from 25,600 to 6400, which can be extended to 12,800. Yes, the native ISO range of the older camera actually goes higher than the 5DS/5DS R’s extended range.

If you want a camera to take out shooting in all kinds of conditions, we’d still recommend the Canon EOS 5D MKIII even though it’s getting on a bit. It’s simply far more flexible, especially if you’re not going to be using a tripod.

The Canon EOS 5DS and 5DS R are going to flourish in conditions where you have a good deal of control over the lighting, or where it is at least going to be good. It’s a studio camera, more-or-less, especially when you consider the other options at the price. The Nikon D810 is much cheaper than the 5DS, offers super high-ISO performance and plenty of resolution for most uses (36-megapixels). 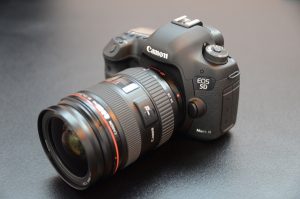 Still, if maximum detail is the top concern, it’s here that we discover the difference between the two new models. The Canon EOS 5DS has an optical low pass filter, while the 5DS R does not. Or, to be more accurate, it actually has two. The first filter has the usual OLP effect of reducing moire noise and sacrificing a tiny amount of detail while the second cancels its effects out.

It might seem silly to work this way around, but it’s likely to do with being able to work with an existing hardware design — presumably Canon couldn’t have simply ‘left out’ the OLP filter.

The Canon 5DS and 5DS R have the same AF system as the three-year-old 5D Mark III. That’s a 61-point AF, 41 of which are cross-type

That’s enough to offer good focus tracking, and we expect performance in the new models to be great, just as it is in the 5D Mark III.

Other than worse low-light performance, one other possible downfall of using such an amazingly high-res sensor is slower burst performance. However, Canon has counteracted this by using a processor array with more power.

The Canon 5D Mark III has a single DIGIC 5 Plus processor, a chip that was tip-top back in 2012 and provides the camera with 6fps burst shooting. For a camera that doesn’t claim to be all about performance, that’s fairly fast.

There has been a slight dip in speed in the new models, to 5fps, but even this is fairly impressive given the sheer resolution of the Canon EOS 5DS and 5DS R. The cameras use dual DIGIC 6 processors, which Canon claims offer lower noise than the last generation. 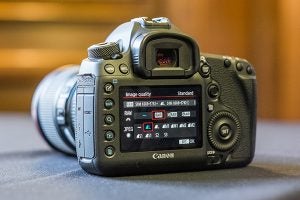 Yet another sign that the Canon EOS 5D Mark III doesn’t yet belong in the past is that the EOS 5DS and 5DS R don’t offer 4K video. It’s still not yet something you see in high-end full-frame cameras, but some people will be disappointed.

The Canon EOS 5DS and 5DS R can’t shoot video at 1080p 60 frames per second either. Just like the older camera, the max frame rate if 30fps. All three cameras have microphone jacks, meaning they’re fair choices for part-time videographers, if ultimately slightly disappointing ones technically.

Which is the best camera?

The Canon EOS 5DS and 5DS R made a big impact on landing. The highest-resolution full-frame DSLR to date certainly sounds impressive.

However, they are much less flexible cameras than the older Canon EOS 5D Mark III, with poorer low-light sensitivity spoiling one of the key appeals of a full-frame camera. If you’re a pro photographer who is going to be shooting at low ISOs in a studio environment, the new guard might just be perfect. The average enthusiast photographer would be much better off with the EOS 5D Mark III, the Nikon D810, or waiting for the Canon EOS 5D MKIV, expected to arrive later this year.